The number of pit structures that have been found is estimated to number into many hundreds. They are found singly, or more rarely, grouped in pairs in a single platform, or in groups of up to twelve or more. The following features characterize all pit structures: they are almost always on sloping ground and they form the centre of an artificial platform, about 20 metres across, which is retained by a stone wall on the lower slopes of the hill. 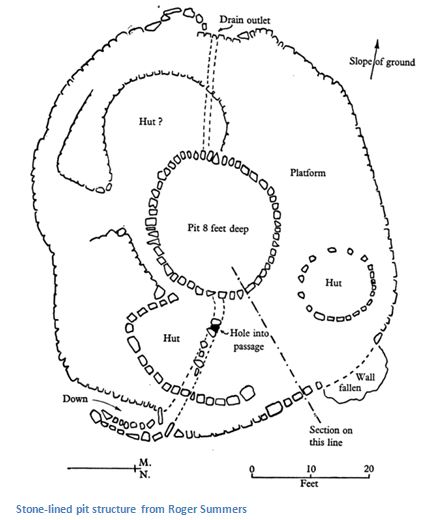 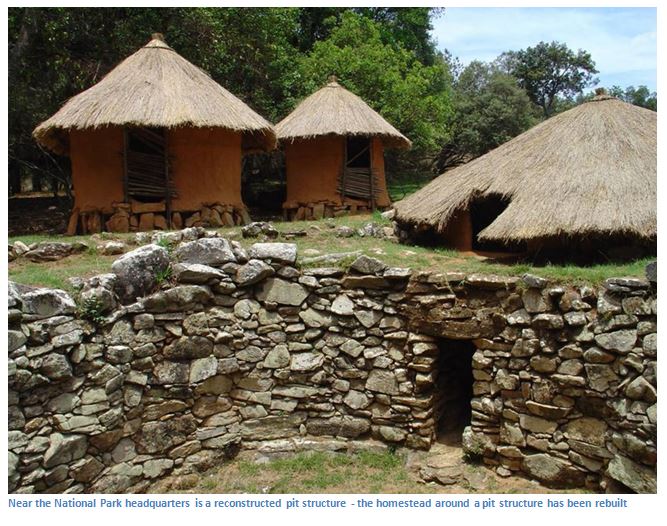 On this platform is typically found five or six stone circles of varying size linked by walls and forming the foundations of huts and granaries (dhaka floors, kerbs and low internal dividing walls still survive in the least disturbed examples) and they would have comprised the main kraalhead's hut surrounded by wives’ huts and grain huts.

From the upper slope of the hill, the pit itself is entered through a long, low and narrow tunnel, walled and roofed with flat stone slabs. The tunnels are curved so that the exit is never visible from the entrance. Halfway along, a gap in the tunnel opens under the centre of the largest hut on the platform. This roof opening provided a floor slot that enables the tunnel passage to be blocked by the occupants of the hut to keep their animals in at night.

The pits themselves are beautifully made of close fitting stones laid without mortar and are generally about 5 to 10 metres wide and 3 metres deep. No traces of roofing have ever been found, either round the tops of the pits, or as fallen fragments, within them. They must always have been open and this indicates that they could not have been intended for people to live in, which rules out their use by slaves.

The floors of the pits were paved in stone, sloping down to a large stone lined drain, which ran under the platform and away. Frequently, large ditches lead from the drain to small earthwork dams, or to the tunnel of a second pit, lower down the hill slope, and so through this pit and drain and away. This is evidence of a regular flow of water flushing the pits; and would seem to rule out any possibility of the pits being used for the storage of grain which would need, above all, protection from damp.

Livestock farming was an important part of the economy in both the Nyanga Uplands (1500 to 1700 AD) and in the Nyanga Lowlands (1700 to 1800) Local tradition says that a small breed of hornless cattle was also reared, but no excavated bone remains support this idea. It is more likely that the pits housed goats, pigs and sheep. In fact, Hall recorded they were used precisely for this purpose by Africans in the nineteenth century. The animals were kept in the pit by wooden poles let into the tunnel from the floor of the main hut.

The owner and his family lived in the huts on the artificial platform surrounding the pits. Grain was stored in the smaller huts built on stone foundations and similar structures are used even today.  Any isolated clump of trees or thick bushes on the roads in the Nyanga area can be taken as a strong indication of a pit beneath them, as they provide good protection for saplings from fires. Like the Forts, the pit structures are thought to date from the sixteenth century.

When to visit:
All year around Monday to Sunday 6am to 6pm
Fee:
Entrance free once the National Park fee is paid
Category:
Ruins
Province:
Manicaland