Along with the stores which line the road running through Penhalonga and overlook the Mutare River and Redwing mine dumps is the Penhalonga Church which must be aged at least a century.

Constructed with corrugated-iron sheets that were used in the earliest prefabs and shipped from Britain around the world; the material all but fell out of fashion as local building industries developed.

Penhalonga Church was constructed locally by the community and continues to function as a Church today and deserves to be listed as a National Monument.

From Harare to Mutare on the A3 pass the A15 turn-off for the Nyanga Road. 2.2 KM later turn left before Christmas Pass at the petrol station on the road signposted for Penhalonga. Drive to Penhalonga Village passing at 5.9 KM on the right the La Rochelle turnoff, 7.2 KM pass the turnoff on the left for the Fairbridge Road, 8.8 KM pass the police station, 9.6 KM turn right off the tarred road and drive into a fenced area under trees to the Penhalonga Church.

For a local guide, I strongly recommend contacting Gary Goss in advance of your visit and meeting at La Rochelle. This is an artisanal gold-mining area and local people can be suspicious of visitor’s intentions. Gary is well-known and respected. Mobile  0772252001 or 0772249011

Penhalonga Church is aligned east – west, with the sanctuary in the east and the Church porch in the west. The Church porch leads into the wider nave area and has a lancet window on the north side (i.e. a tall, narrow window with a pointed arch at its top) and a simple wooden cross over the door. A flight of nine cement steps leads up to the porch.

The nave has five pews on either side, which probably each seat about four persons comfortably, meaning a full congregation of about forty persons at any service. 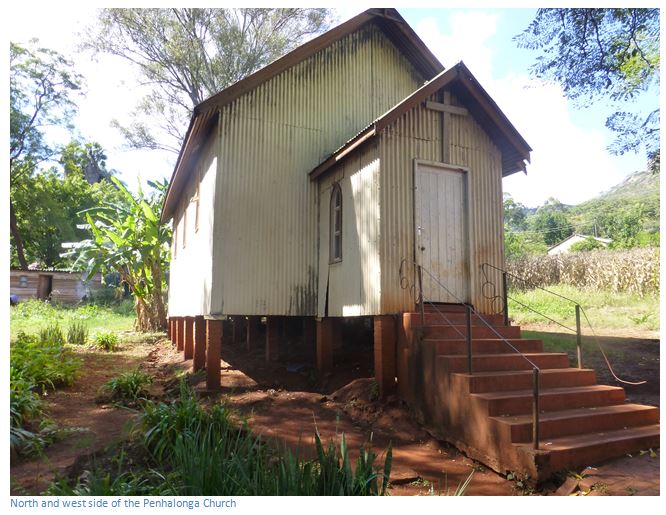 The nave and porch are supported on brick pillars which may have been designed to keep the timber frame and floors away from termites, but also helped to accommodate the Church floor to the steeply sloping ground as the east side pillars are half the height of those on the west.

I do not think the Church was ordered by catalogue and shipped out to Penhalonga as happened to the buildings at Pilgrim’s Rest in Mpumalanga (formerly the eastern Transvaal) the Mine Managers prefabricated house on the Independence Mine, Penhalonga and for the ironwork for the Harare shops of Arnold Buildings and Store Brothers in Robert Mugabe Road  (formerly Manica Road)

I believe the corrugated iron-clad structure was probably fabricated locally using the volunteer services of the skilled artisans from the Penhalonga and Rezende Mines. These sheets would have been secured to a timber frame and floor and then covered in timber planking to hide the structural timbers. In recent years the roof and chancel have been painted a light blue to lighten the interior. Metal ventilators are set into ceiling and these were probably also constructed by the skilled artisans on the mine.

There do not appear to be any other paint colours under the current white of the exterior walls and green of the roof, so perhaps subsequent repainting has followed the original colours. 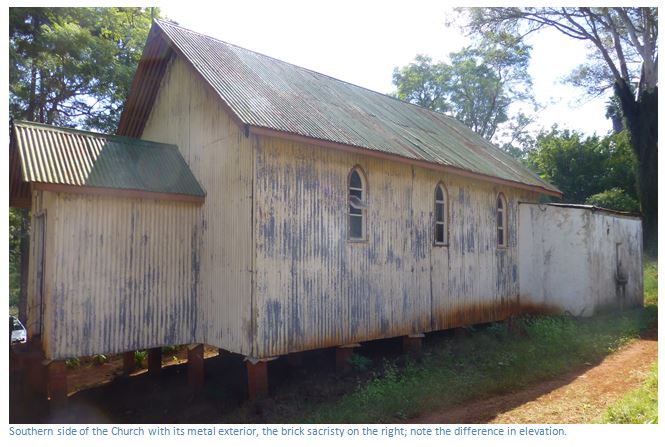 The small brick building on the right is probably a later addition, perhaps a storeroom for the clergyman to keep his robes. There would not have been a resident clergyman; most probably an Anglican Priest rode over by bicycle from St Augustine’s Mission to conduct Sunday service and changed in this room, usually called a sacristy.

The corrugated-iron and timber construction gives a much lower and sturdier building profile compared with many churches built of brick which are usually much taller. A timber frame construction becomes structurally unstable for long and tall walls, particularly if cut through by tall windows, such as the three lancet windows each on the north and south sides of the nave. Adding transepts to make a cruciform shaped plan would have improved the stability of the Penhalonga Church, but probably low numbers of worshippers did not justify the extra space. 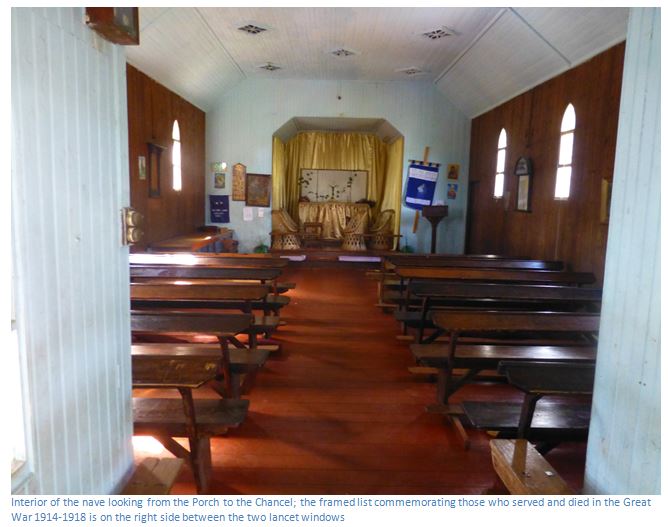 The pews in the nave are probably original and like all the woodwork on the floors, walls and ceiling probably cut and fitted in Penhalonga by carpenters and joiners on the gold mines. The light switches on the wall to the left look Edwardian in style for the period 1901 – 1910 and original; the electricity would have been supplied by one of the mine generators and there are the remaining electric insulators on the outside of the east wall behind the Chancel where the power supply would have arrived.

The light fittings more than any other feature probably serve to date the Church. I would guess it was probably constructed locally in the period 1901 – 1910 before the Great War and is original, except for the sacristy which might have been added later. 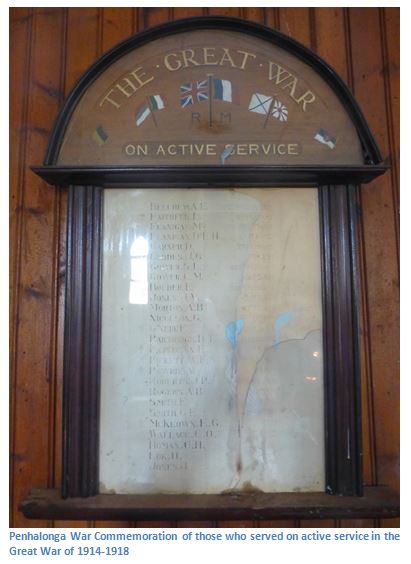 That such a small village as Penhalonga should have been able to supply so many volunteers for service in the Great War speaks highly of their loyalty and patriotism.

This corrugated iron Church has stood the test of time and even today serves the small Anglican community of Penhalonga. Built by the community using local artisans it would have served as the hub of the village once constructed and reflects the small scale of its time. Architecturally and historically, I think it is worthy of being listed as a National Monument to ensure its preservation.

When to visit:
All year around
Fee:
None, but a donation would be gratefully received
Category:
Cultural
Province:
Manicaland