Ox wagons were the only means of transporting bulk goods before the arrival of the railway into Zimbabwe in 1897. Hendrik Bekker was transport riding goods by ox-wagon to Harare in the 1890’s and made good money. His wife accompanied him on one of his trips to Salisbury (now Harare) in 1890 and in 1891 his son Jan was born in Harare, possibly the first baby to be born in the capital. Bekker states that he got as much as seven pounds ten shillings per hundred pound weight for the goods he delivered, and at times there were as many as ninety wagons lined up in Harare. He lost most of his oxen through lung sickness, but as there was a big demand for timber at the time, he signed a contract to saw and deliver wood to the British South Africa Company at eighty pounds a week and started a flourishing saw mill on the banks of the Hunyani. Bekker also stated that many transport riders, having completed a good contract, sold their wagons and returned to South Africa by coach with the cash. 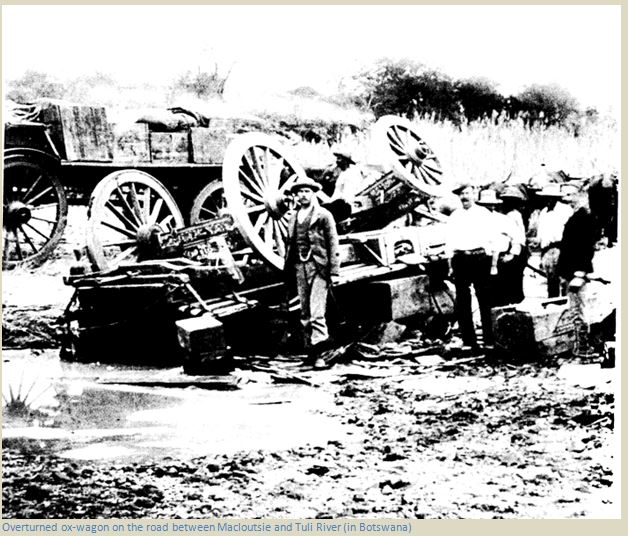 On particularly steep gradients, two spans of sixteen oxen each were required to ascend. On many occasions the chain, or the dissel-boom attached to the wagon broke; it then ran back out of control and landed upside-down (as depicted above) destroying all the goods and furniture and killing or maiming the oxen! To safeguard wagons from breaking away, a big wooden block, or pole, was dragged along at the back of wagons so that the wheels contacted the obstruction and immediately came to a halt. This method was frequently used whilst traversing Christmas Pass near Mutare by wagon in the old days.

Some extracts below are taken from the Travellers handbook which was mostly written and illustrated by Thomas Baines in fortnightly parts in 1868 and then re-issued as one volume in 1876.

The Handbook starts by saying that the British emigrant invariably starts by denouncing the colonial wagon as clumsy, unworkmanlike and inefficient and threatens to effect immense improvements. Baines concedes that imported carriages from England or America, under the names of spider or skeleton carriages, do good service on the well-made roads of 1868 in Cape Town, or Port Elizabeth. However, in the densely wooded kloofs, or rugged mountain passes of the interior, in crossing rivers which threaten to sweep all away, the ponderous Cape wagon is best adapted to meet the needs of the travelling, or exploring party. 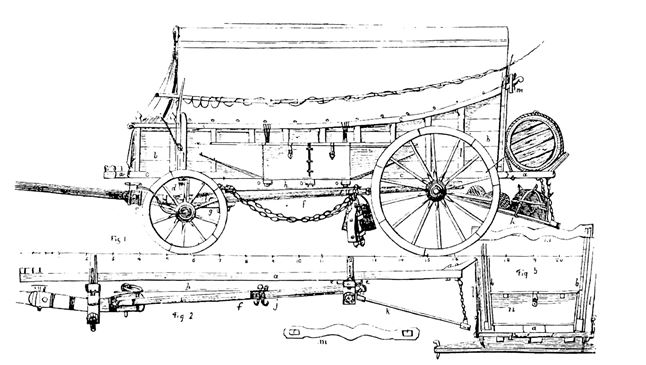 In addition to showing how the tent frame might be converted into a boat and the waggon chests into a raft there are instructions for repairing axles, fore tongs, dissel-booms, strengthening wheels when the spokes shake loose, putting in new spokes without taking the wheel to pieces; all useful hints for the nineteenth century explorer miles from help. “Kap-tented” travelling wagons were about 5.2 metres (17 feet) in length, the sides generally of yellow wood planks, the fore and rear axles connected by a stout beam, the “lang wagen.” To the dϋsselboom, or carriage pole, behind the front axle was attached a stout ring-bolt, to which are attached the drag chains to the oxen. At the rear axle is the “trap” a kind of framework for holding pots, kettles and firewood.

The interior space is about 3.4 metres (11 feet) long and 0.9 metres (3 feet) wide,  with the kapel, or bed, an oblong frame with a netting of raw hide thongs, tied above the cargo to the stanchions of the tent.

The wagon whip is a well selected straight-grown male bamboo 3 metres to 4.6 metres (10 to 15 feet) in length, with a lash of 6 metres (20 feet) as thick as the little finger, with a “voorslag” or lash of kudu hide adding 1.5 metres (5 feet) This was a formidable weapon in the hands of an experienced driver, and any particular ox in the long team of 12 or 14 may be gently filliped in any part, or have the whip cracked next to his ear if he shows stubbornness or obstinacy, or a cloud of hair may be cut from his sides, until he goes about his duty.