For the country to progress at all it was necessary to build an adequate transport system with roads, bridges and railways. The Beira-Mashonaland Railway was considered indispensable to the progress of the settlements in Rhodesia. Fortunately, a close friend of Cecil Rhodes was Sir Charles Metcalf, a well-known pioneer engineer, who administered the engineering firm of Sir Douglas Fox. He became the consulting Engineer for the whole of Rhodesia, Beira and Benguela railway system.

The Anglo-Portuguese Treaty of 11 June 1891 recognized the Pungwe River as an international waterway and allowed for a railway to be built between Beira and Mashonaland. On the 10th August 1895, the Beira Railway contract was signed, all looked forward to the happy day when the first train would reach Old Umtali. The 222 mile (355 kilometres) link to Umtali (now Mutare) was built with 2ft 0 inch track gauge using 20lb / yard rail. This gauge allowed tight turns and narrower embankments and viaducts both minimizing the cost and speeding up construction.  The BSA Company had acquired the rights to construction of the railway and appointed George Pauling in 1892 as the main contractor.

The hazardous, laborious project of building a railway from Fontesville to Umtali was full of problems, and its construction called forth great endurance and perseverance, no better man could have been selected than George Pauling who was head of the firm Pauling & Company. George Pauling made rapid progress from small beginnings having originally worked as a navvy on the South African railways before starting contracting work on his own account. Writing about that period in his memoirs, remarked. "I fervently wished that I had never heard of the Beira Railway, At one time practically every white employee on the job was suffering from malaria. In one fortnight we lost six white men, including my bookkeeper and in one year sixty percent of the men died".  Pauling put Alfred L. Lawley in charge of the building of the Beira-Umtali section, a man of strong physique; he was also indefatigable and industrious. 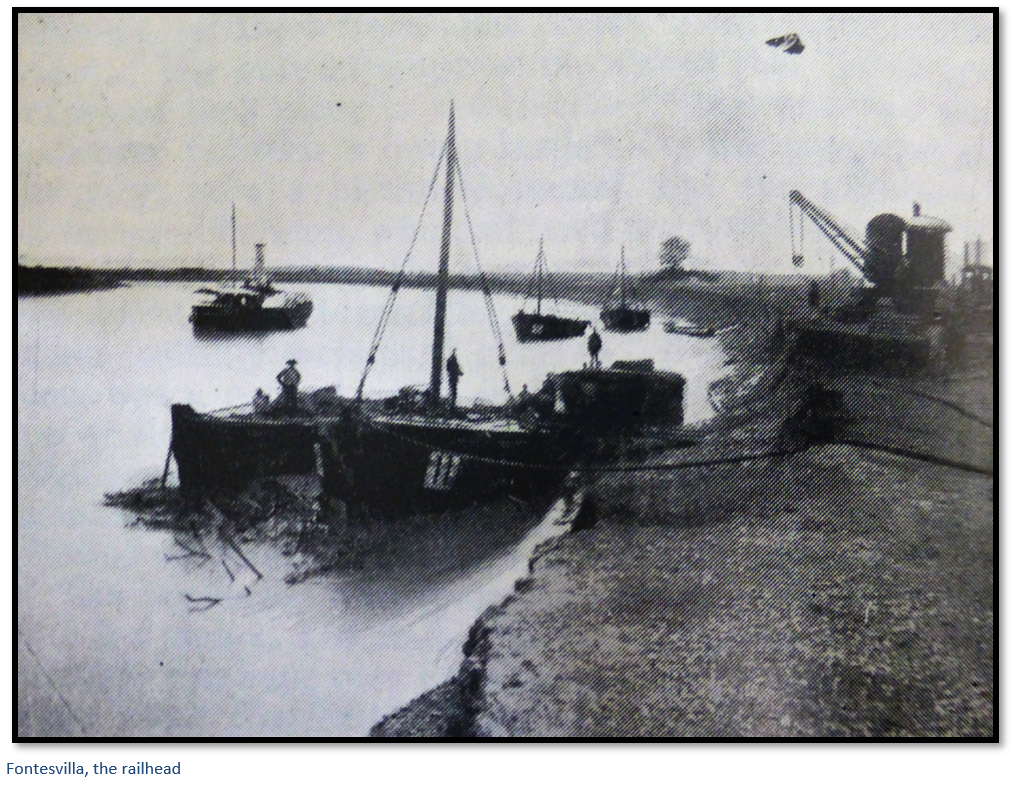 To reduce railway construction costs the railhead began at Fontesvilla, the highest navigable point of the Pungwe River, 40 miles (64 kilometres) inland. Passengers and cargo were loaded on barges which were then pulled by the tugboat Kimberley from Beira to Fontesvilla. Due to the ever changing sandbanks, the barges grounded frequently and delays were the rule. This mode of transport lasted until October 1896 when Beira was linked to Fontesvilla by rail.

To Lawley fell the task of getting the railway across the sixty miles of marshy flats through the Amatongas Forest; up the two escarpments and finally to Umtali, an altitude of four thousand feet. Apart from malarial swamps, blackwater fever and tsetse fly; lions added to the hazards. In one month they killed two European gangers and on another occasion besieged two men in their huts, and often the African labourers had to climb trees to get away from them. The first 50 miles (80 kilometres) across the mosquito infested Pungwe River mudflats were the worst and the most deadly.  It is said that sixty percent of the white staff died from malaria fever, and that one Indian, or Chinese labourer died for every sleeper laid. 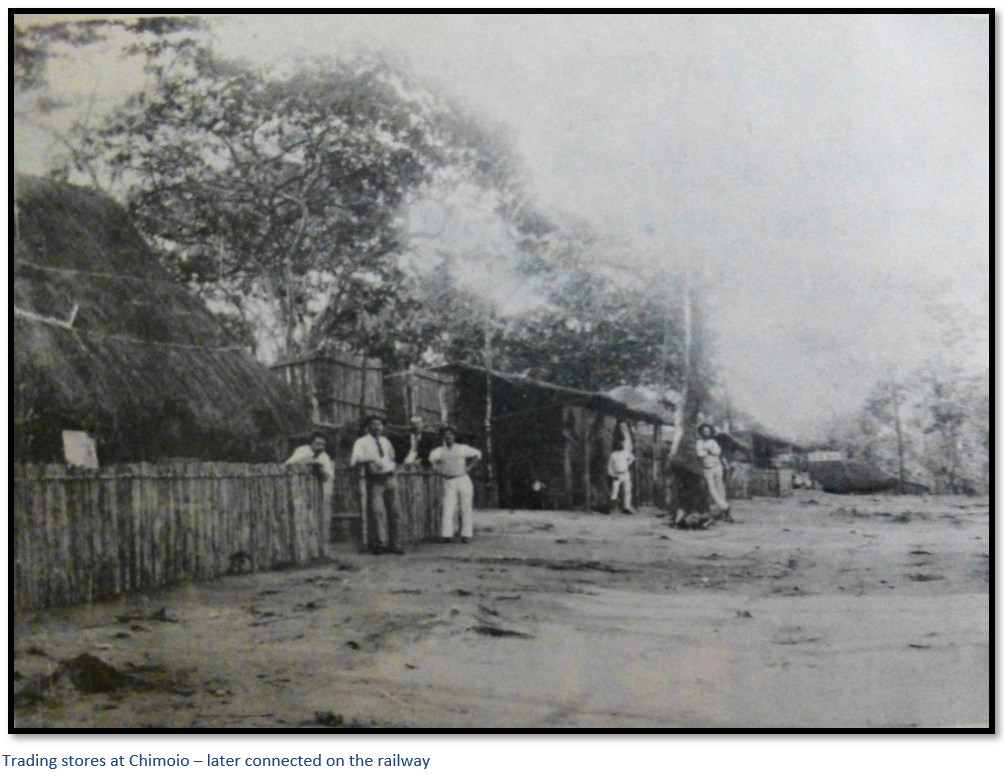 Finally this section was complete, the railway reached Macequece or Massi-Kessi (now Manica) and construction began up the Menini River valley to the present Umtali. The gradient up the valley is the maximum for nearly twenty miles with numerous curves on the slopes of the steep valley. As the railway crept nearer Umtali the small populace, grew, tense and excited; the ox-wagon days were nearly over. With rinderpest and lung diseases in Rhodesia, the prices of provisions were becoming exorbitant, for instance a tin of bully beef was 2/6d, a case of milk 42/- and beer 7/- a bottle. 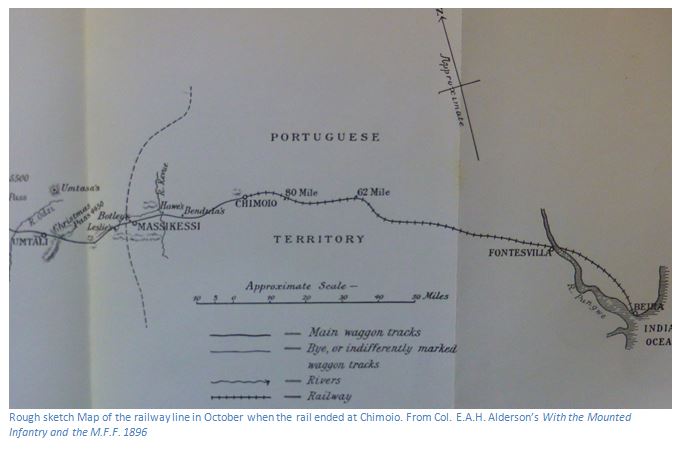 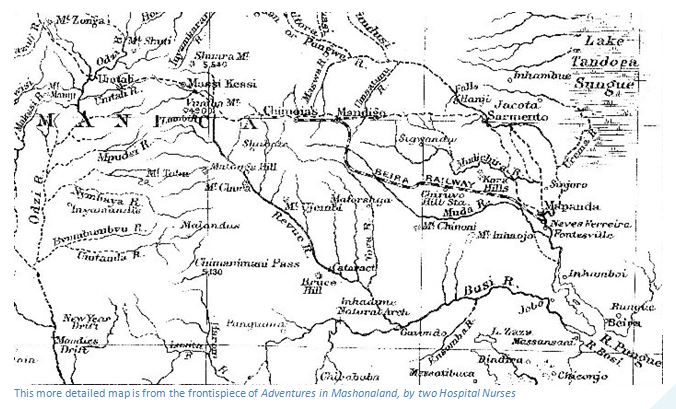 A last, six years after initial construction, the railway reached Umtali in February 1898 and the whole of Umtali was present to witness the arrival. As the whistle sounded in the distance, it caused a few minutes of tormenting suspense, and then a burst of applause rang out as the engine, decorated with bunting, whistling and puffing, came to a halt and the crowd went wild. The celebration committee had organized sports festivities, a rifle competition and a ball and banquet in the Court House. The construction teams of Africans and Europeans had overcome great obstacles and difficulties, but the cost in lives had been high.

Two of the five locomotives ordered in 1892 through Kerr Stuart of Kilmarnock, Scotland for the Beira and Mashonaland Railway were 0-4-2 side tanks of the Brush “Midge” pattern. The one shown below, thought to be No. 212, was named Rhodes and hauled the first construction train into Umtali on 4 February 1898. They were the very first locomotives to be used on the Beira line. No 212 eventually became a shunter at Umtali and No 213 did the same at Beira docks. 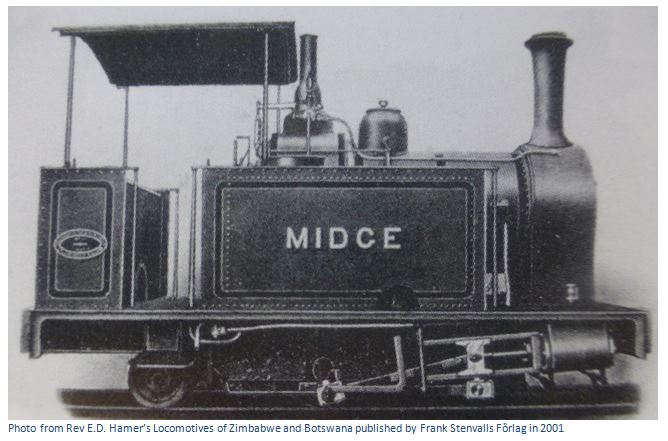 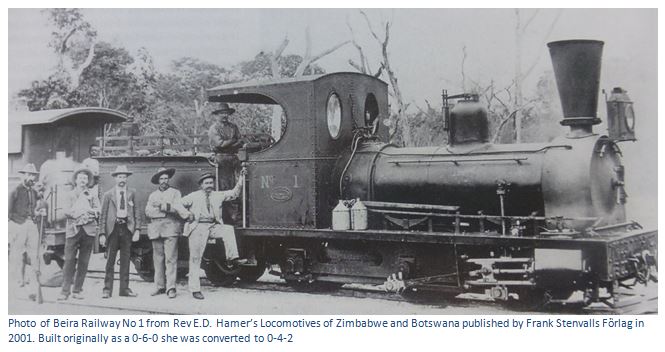 The initial narrow 2 foot gauge track of twenty two pound weight rails although lightweight managed to deal with the traffic  and was a huge success and freight traffic soon grew to such a point that it became essential to replace the line to the standard Cape gauge of 3ft 6 inches.   On 23rd May 1899, the 3ft 6 inch gauge railway link between Umtali and Salisbury (now Harare) was completed; the one hundred and seventy miles was built with materials transported over the Beira railway. The Umtali to Beira line was converted to the same standard gauge by August 1900 in a record time of about six months, compared with the original construction period of nearly six years.

Umtali received a great boost when the railway arrived, as it was decided that the workshops should also be erected. This meant large engine sheds to overhaul the engines and rolling stock on the Beira-Umtali being line, as well as houses for the staff. Even today many of the old houses put up for employees remain standing. At a later date the main workshops moved to Bulawayo, a bitter disappointment for Umtali.

Some of the redundant 2 foot gauge track was used to construct a tramway in Umtali; but suddenly the 45 locomotives and the rolling stock also had no function. They were parked at Bamboo Creek, and became the property of Alfred Lawley, before being dispatched to other African railways, some of them continuing for another fifty years of useful service. 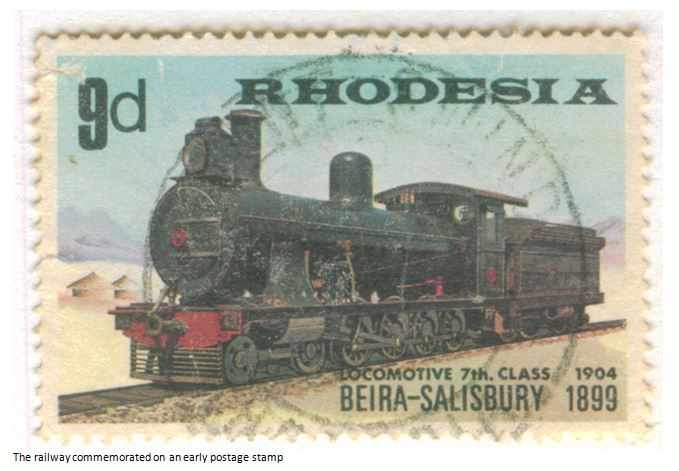