Coming from Harare, approximately 10 kilometres from Mutare turn left off the A3, the main Harare to Mutare Road, onto the A15 to Nyanga, 5.4 KM along the A15 turn left at Old Mutare Centre sign, 6.3 KM reach Old Mutare, now belonging to the Methodist Church.

The name "Umtali" is derived from the African word “Mutare" meaning” River of metals," and refers to the alluvial gold found long ago in the streams and rivers of this area. By 1891, there was a shift from Fort Hill (the first Umtali) to Old Umtali because at Fort Hill there was no room for expansion, and mining claims were gradually encroaching, in fact a prospector had pegged a claim right on the road in front of one of the settler's homes, and started digging a shaft!

The new site was selected because there was land for expansion, it was situated only half a mile from the Mutare River for water and finally the road track from Salisbury ran right through the site. The first building was the police station, the ground was cleared and the buildings of pole and mud were constructed by prisoners under the supervision of police guards. Then a hospital was built near the police station in order to protect the women. There were good reasons for this as the following illustrates. There had been a murder case at Maranke village, some forty miles away, and the Magistrate, Captain Heyman, was going to investigate. That night, right before his eyes, a large lion bounded into the camp and seized a sleeping African. For a moment there was dead silence, and then came terrible screams as the victim was mauled. Immediately the Magistrate, followed by his men, rushed towards the scene, taking lighted logs and flaming torches of grass. They confronted the lion and drove it away, but the man had been fatally injured.

Tulloch was given a contract to build a commissary store and the Post Office. The Manica Trading Company had a store as did G.W. Golding, A.W. Suties and Co and Deary and Company. The first two hotels were Maritz’s and Poulier’s which were dhaka and thatch buildings like all the others and went out of business when the liquor ran out. Later Snodgrass and Mitchell built the Royal and Hatfield Hotels. The population included 30 – 40 European men and Tulloch says: “It was a great little town and the inhabitants lived a life of Hope, Energy and Go.” 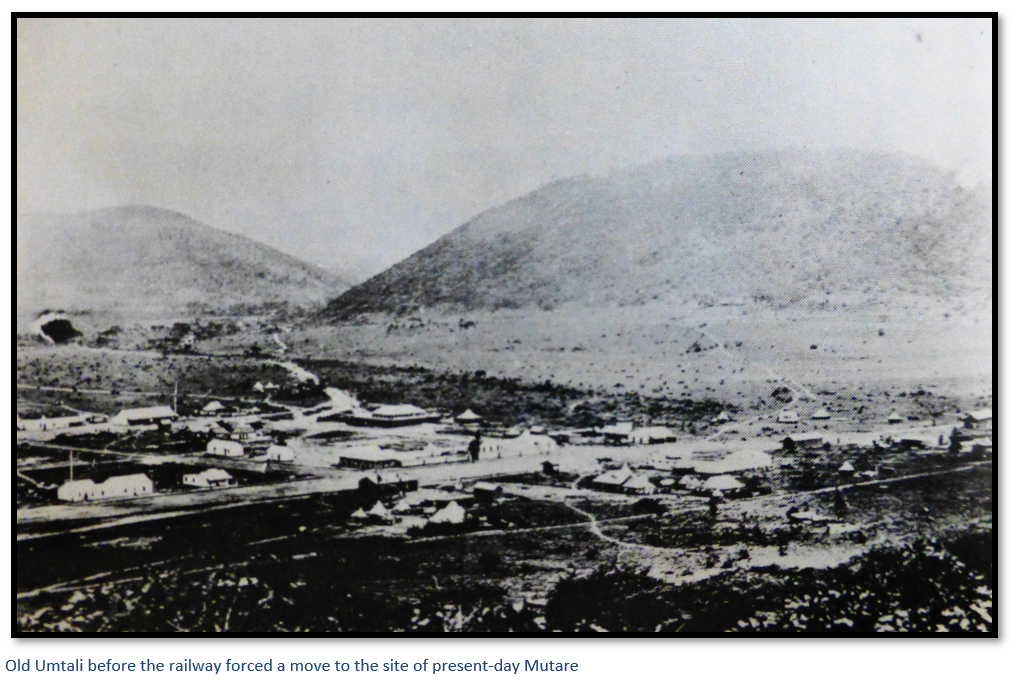 At this time Jameson asked Dr. Hans Sauer to go to Beira and escort Rhodes, who was then on his way from Cape Town, to Manicaland for the first time.  Dr. Sauer travelled down from Salisbury to Old Umtali, but as he unloaded his luggage, a lion appeared and leapt on one of the mules, breaking its neck, and dragging it away in the gathering darkness. At that time lions were so troublesome that Colonel Heyman was obliged to parade up and down main Street of Old Umtali, firing a gun with blank charges, every few minutes from dusk till 8.00pm and after this everyone remained indoors.

The hospital, a pole and dagga building, was pitifully equipped with five iron spoons, a couple of pots of meat extract and a packet of Maizena and with these items Sisters Welby, Blennerhasset and Sleeman started their nursing careers in Manicaland. Beds were made from poles and laced with leather riems to support the grass mattresses. Delirious malaria patients were brought in from miles around, and also blackwater and dysentery cases. The overworked nurses, with little hospital equipment and sparse supplies, did all they could to prevent suffering, but malaria claimed many victims.

The first newspaper, the Umtali Advertiser appeared on December 13th, 1893. The first issue was duplicated from handwritten sheets and the history of Manicaland is recorded in its pages. A copy, now yellow with age, is shown at the Mutare Museum.

J. Bekker and E. Smith in a 1971 Zuro article state that by 1894 many of Old Mutare’s public buildings had been completed at either end of the main street. At the eastern end was the Court Room, Gold commissioner’s Office, Civil Commissioner’s Office, the Magistrate’s Office and the Posts and Telegraph Office. The western end had the Police Station including a Barrack Room, Charge Room, Sergeant’s Room, Kitchen and two cells for prisoners.

By 1895, the town was thriving and comprised 75 men, 13 women and 9 children. As the town progressed and more building material was brought on their wagons from South Africa, the original primitive buildings of wattle and daub and iron disappeared. The new township gradually developed, three hundred stands were surveyed by Pickett and Fairbridge, the first surveyors to arrive. A sale took place in July 1892 - forty four stands were sold for a £1,396, the highest price being £56.

A Sanitary Board was formed; there were five hotels, including the Hatfield run by Snodgrass and Miss Mitchell, the Avenue, Masaive and the Royal; two butcheries and two bakeries, a printing shop, the Standard Bank and the National Banks, the Manica Trading Company Store, Meikles Store and a soda water plant, a church, school and a library containing five hundred books. Water was transported from the Nygambo stream in a small water cart on two wheels, drawn by either oxen or donkeys. The animals became so used to their trips, backwards and forwards each day, that frequently the residents would see the cart loaded with empty paraffin tins, or an old rusty drum, making its way to the river without a driver; he would be sitting alongside the track with his pals having a chat!

Monday was washing day and the house servants arrived at the river with baskets and paraffin tins filled with dirty washing. They laughed and gossiped and floating downstream went the soap suds, whilst every rock was used for scrubbing clothes. Many women were nearly reduced to tears when their laundry was returned, their delicate lace and flimsy items rubbed to pieces!

As previously mentioned, the hospital was near the police station, and as women were scarce, members of the police force found the hospital an attractive spot. Christmas day was no exception, when a few police came to greet the nurses and brought a rather large Christmas present - a cow! The nurses were more than delighted as the hospital had to depend on tinned milk, and fresh cow's milk would be a blessing. The police left pleased that their gift was appreciated. But to the nurses' chagrin, the irate owner of the cow swept down on the hospital and dragged the animal away. So the nurses' great hopes of fresh milk never materialised, and the police were not welcomed after this incident as the cow, during her brief stay, had devoured their precious garments hanging on the line.

With the outbreak of the Mashona Rebellion or First Chimurenga there was general confusion concerning Chief Mutasa and the local Manyika people’s intentions; signal fires were seen in the surrounding hills and European left their mines and farms and concentrated on Old Umtali; however fighting did not take place.

When the Rinderpest outbreak took place all the oxen died and the transport became very limited between the railhead at Chimoio and Umtali. There are many traveller’s tales of the rotting carcases and abandoned wagons on the road from Chimoio and this added a sense of urgency behind completing the railway line into Mashonaland and the eventual demise of Old Umtali.

Rhodes had promised them that the railway from Beira would pass through the town and had selected a piece of ground for a railway station. This was an encouraging prospect for the future. The land they were occupying would be valuable; farming and mining were bound to prosper, and when that great day arrived, everything would improve. On the 10th August 1895, the Beira Railway contract was signed, all looked forward to the happy day when the first train would reach Old Umtali. 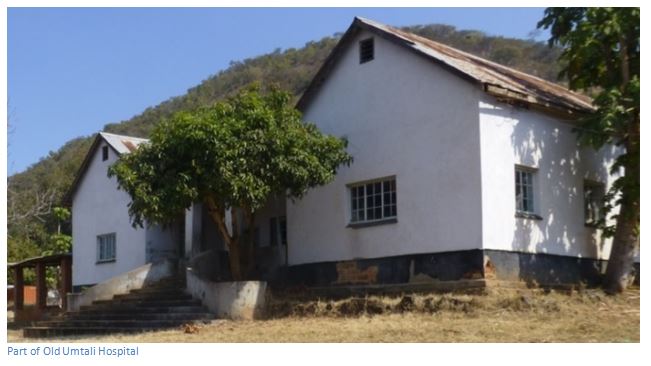 The first section of seventy five miles was fairly simple and the narrow-gauge from Fontesville to Chimoio was replaced by standard gauge, but at tremendous toll of human and animal life and hundreds of European, Indians, Africans and animals had died from malaria and tsetse fly.

To complicate things, the dreaded disease rinderpest had broken out. The country depended entirely on ox waggons; it was thrown into chaos as animals died rapidly and often waggons with all their goods were left stranded on the road. Not only were cattle affected, but buffaloes died in their thousands. Eventually the disease died away, the roads were re-opened and although transport was still hampered by a lack of oxen, the Zeederberg coaches were on the move again.  The telephone system expanded and Old Umtali was connected up to Salisbury. From 1896, Inyanga was the headquarters of E Troop, guarding the construction of the Trans Continental Telegraph line which linked up Salisbury to Inyanga and continued to Tete.

26 March 1896 was a milestone in the history of Old Umtali as Rhodes met the townsfolk at a well-represented meeting to discuss the pros-and cons regarding the cost of bringing the railway line to old Umtali. The mountains were the great handicap and a substantial bridge was required over the Odzi River. To bring the railway to the site of the Old Umtali entailed an extra distance of twenty four miles, going over Christmas Pass and tunnels, an estimated additional cost of £180,000.

The proposal was to move Old Umtali to a suitable site on a direct line to the Odzi River. New Umtali would be a replica of Old Umtali, all present owners of stands would have a corresponding position in the new township. Valuations were made of the existing buildings and agreed with the owners. The BSA Company promised to build Government buildings and hospitals in the new township, and provide a water supply. The final sum after buying farms in the proposed sable Valley would be £56,000; still cheaper than the £180,000 for re-routing the railway to Old Umtali.

The proposition was put to the residents, who really had no alternative. Some who had recently built their houses were now compelled to pull them down again and transport them to the new town.  Rhodes, having clarified most matters, interviewed everyone who had a problem. Most people realised that the railway was the main factor and that the proposals would benefit them and soon the old town looked derelict, with roofless buildings lacking doors and windows. Clouds of dust rose from ox wagons loaded with wood, iron and household goods making their way towards the steep gradients of the Christmas Pass.

Old Mutare was given over to the American Methodist Church, a wise choice, as they have continued to support local institutions and today there is the thriving and successful Hartzell Primary and Senior School, a Church, Old Mutare Mission Hospital and Fairfield Children’s Homes with the much respected Africa University nearby. Another benefactor, The Beit Trust, continued to use funds for the benefit of the community and in 1952 built the Beit Hall currently used by Hartzell High School for assembly.

A plaque commemorates the fact that the Chapel was the first building used by the Anglican Church until it was converted into a Theological School in 1954, the first tutors being Reverends Faku, Chimbadzwa, Kapenzi and Nduna.

Behind the Chapel a poignant cemetery marks the final resting places of many leading Methodist Church leaders, including those of Abel and Maggie Muzorewa. Abel was the first black Prime Minister of this country and part of the epitaph on his grave reads: In Church, Politics and Life he taught us to “rise up and walk.” 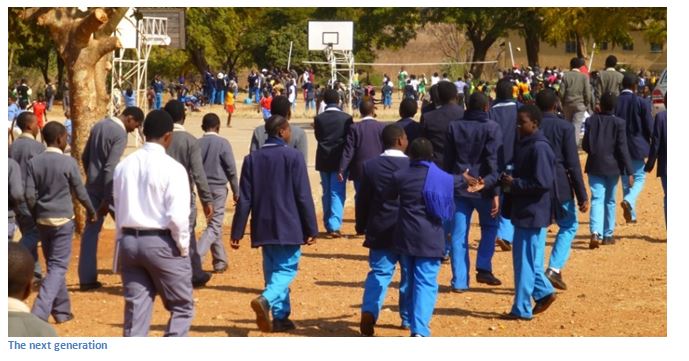 When to visit:
All year around, but enquire at the School Administration for permission first
Fee:
Entrance free
Category:
Historic
Province:
Manicaland