National Monument No.:
99
Why Visit?:
How to get here:

At the time of our visit it was not possible to visit the site of Nyahokwe Village because of a dispute with the local community and the sign indicating the site had been taken down. Hopefully, this will be resolved and visitors will be able to visit this important cultural site. 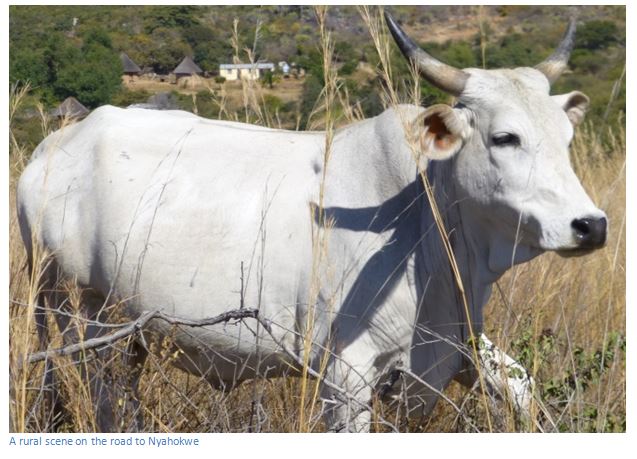 Evidence from excavations carried out on site show there has been occupation from hunter-gatherer periods of the Early Stone Age about 50,000 years ago in the form of crude tools that were made by striking flakes of stone off a rock. The stone flakes, or flake tools, that were struck off the cores, were used for cutting and skinning animals, or to work plant materials. The crude tools of the Early Stone Age were succeeded by smaller, more varied and finely made stone weapons of the Middle and Late Stone Age.

The hunter-gatherers were succeeded by a more settled agricultural people who brought with them domesticated animals, crops and used pottery, iron tools and weapons.  The Ziwa culture (200 to 800AD) was a pre-cattle rearing farming community who raised sheep and goats in settlements. Although the culture lasted for at least 600 years, visible remains are very few as the people lived in flimsy huts and only rarely did they build rudimentary terraces in stone. Though these sites cannot be visited, examples of the Ziwa pottery, with its characteristic comb stamped rims and necks and various ironwork pieces, such as arrow and spear heads and hoes, are exhibited in the Ziwa Site Museum.

This was followed by a Transitional phase characterised by elements of both the Ziwa and Lowland cultures, (800 to 1,500 AD) during which later farming communities built the stone terraces and field systems, hill forts, pit structures and stone enclosures, iron smelting and forging furnaces and numerous dhaka huts.

Nyahokwe and Ziwa were visited by Dr Heinrich Schlichter in 1897 and Dr Carl Peters in 1900. Peters claimed to have discovered the ruins of cities and deserted gold mines of the Kingdom of Mutapa, which he identified as the legendary ancient lands of Ophir and wrote an account of his travels in a book, The Eldorado of the Ancients in 1902. R.N. Hall wrote The Ancient Ruins of Rhodesia with W.G. Neal and believed they were built by Arabs from Mogadishu and Kilwa in a different style from Great Zimbabwe during the eleventh, or twelfth centuries.

In 1905 Randall MacIver did the first archaeological excavation in 1905 and found large quantities of Ziwa pottery, but he did not realise the full significance of the age of his finds. He concluded all the building was carried out by local people who lived here between the thirteenth and seventeenth centuries. His book Medieval Rhodesia is the first accurate description of the ruins.

Properly conducted excavations were carried out by Roger Summers and Keith Robinson and the results published in R. Summers book; Inyanga, Prehistoric Settlements in Southern Rhodesia.  F.O. Bernhard also contributed many useful articles on Inyanga and the Ziwa Culture.

This area contains numerous sites relating to the Ziwa people, the earliest Iron Age inhabitants of Manicaland whose culture lasted for at least 600 years from 200 AD, with examples of the Ziwa pottery and ironwork exhibited in the Ziwa Site Museum.

A path leads a few metres west to the reconstruction of an iron smelting furnace. The low, circular stone enclosure wall, the size, daga fabric and supporting arms or buttresses of the furnace are typical of "Iron Age" and later Shona furnaces. The rectangular shape and particularly the small human figurine arc more unusual, though many Shona furnaces have human breasts and scarification modelled on them. Behind the furnace is a simple pit structure with an unusually small pit.

Another path leads the way up to Nyahokwe mountain. After a short distance, one path goes east to a further simple enclosure and typical pit structure. The main path leads on a steep climb of about 1 kilometre past terracing and a further pit structure to the Nyahokwe Village site (National Monument No. 99), crouched under the cliff face of the very summit of the mountain. This is a complex settlement, not at all usual in the Lowlands, with several elements most commonly found in the Uplands. It may have formed the quarters of a ruling group or chief. Granite replaces the dolerite used in the van Niekerk Ruins. There are four separate elements.

1. Just east of the path as it approaches the village, and about 100 metres below it, the level plateau of bare granite is scarred by a great number of grinding grooves in the native dolerite rock, often six or more purposely grouped within reach of one person seated at their centre. These were probably used for grinding grain, rather than the preparation of ores. 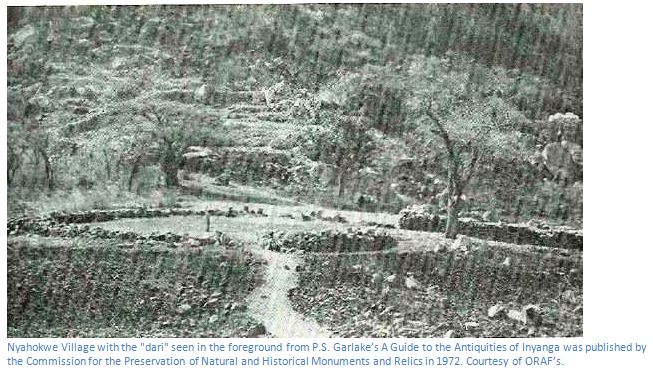 2. The great level circle, 18 m in diameter, with upright stones set round its perimeter formed, from local African parallels, a "dari" or meeting place of the village elders.

3. Leading off the dari to the north east is a large pit structure whose typical features of tunnel, pit, platform and particularly hut circles are very clear.

4. The village site itself is enclosed by a rough wall and entered through the usual lintelled entrance, which gives onto an inner passage. The sloping ground within contains numerous stone slab foundations of what were probably grain stores and also one strange circular cairn, almost a small "conical tower", whose real function is unknown. On the inner face of the outer wall are several small square niches or "cupboards" — a feature occasionally found elsewhere in the Lowland buildings. Evidence from the base of excavations of the village showed that the Ziwa culture preceded the stone building on this site and that from the eleventh century an apparently gradual and peaceful transitional phase occurred, marked by elements of both the Ziwa and Lowland cultures, from the eleventh to perhaps the fifteenth centuries, when the builders in stone took complete possession. The village was excavated by Mr. F. O. Bernhard, the owner of Ziwa farm, who gave the land on which the village and museum stand to the Historical Monuments Commission. On returning, notice the terracing of the hills immediately to the west of the museum and village site. 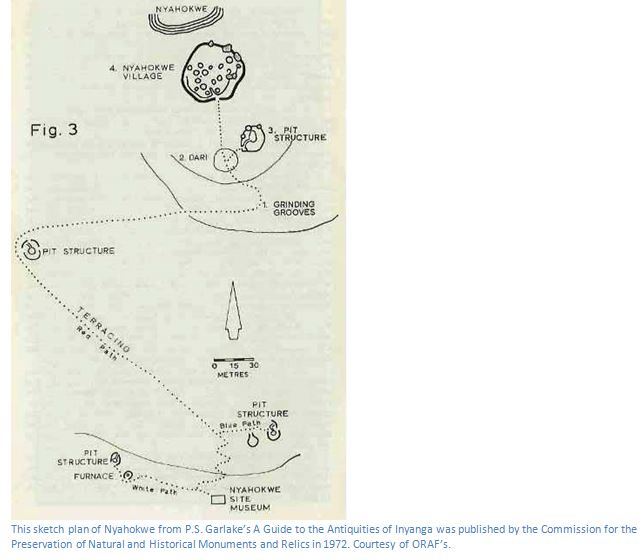 Len Mullin in his excellent book, Historic Trees of Zimbabwe, says that Zimbabwe’s rarest native tree, the only Juniper tree (Juniperus procera) known in the country is at the Nyahokwe monument site.

Religious activities are carried out by the local Nyahokwe clan before every rain season, although their community do not claim to have built the monument and as the NMMZ website notes  such rainmaking ceremonies are part of this monument’s contemporary use value.

When to visit:
All year around
Fee:
An entrance fee is chargeable
Category:
Ruins
Province:
Manicaland