Visitors may feel the need to get to the summit of the highest mountain in Zimbabwe at 2,592 metres (8,504 ft.)

The hike to the summit makes for an energetic and exhilarating, but not exhausting, walk in the fresh air which can be tackled with confidence by younger children and teenagers.

There is the unusual experience in Zimbabwe of being able to dip tired feet into a cool mountain stream, without the anxiety of catching bilharzia.

Great views, if the clouds have not closed in, of Zimbabwe to the west and Mocambique to the east.

The landscape of Mount Nyangani is not as rugged and untamed as in Chimanimani; the mountainsides are not as steep and rocky and most of Nyangani’s slopes are covered in grass and heath on the summit plateau with evergreen forest along the wetter eastern slopes and grassland to the western side.  Three rivers have their sources on the mountain: the Nyamuziwa River, the Kairezi (Gairezi) River and the Pungwe River and the clawless otter and the Inyangani River Frog can be found in their upper reaches. The mountain has resisted erosion due to a dolerite sill over the underlying sandstone sediments.

Wherever the visitor travels in Nyanga; along the scenic roads, fishing in a stream or dam, or just walking, the mountain will be seen and because it is the country’s highest point, it presents a challenge to some only satisfied by getting to the summit. The mountain can be climbed from a number of starting points within Nyanga National Park, but the recommended one for visitors is from the official car Park, at the base of the Tourist Route, reached from Circular Drive.

A number of guides say it is no great challenge for anyone of average fitness to reach the summit beacon, about 4.5 kilometres from the car park within three hours. However,  annual rainfall is high (around 2,200mm) and walking can become extremely hazardous due to bewilderingly fast weather changes from bright and sunny, to a foggy, cloudy and dewy terrain in a few hours  and under these conditions several fatalities have occurred due to hikers losing their way and falling down ravines, or disappearing without trace. The weather is more predictable during the winter period of May to August when long spells of dry weather occur. The last snow was recorded in 1935, but the wind chill factor can make it very cold. Experienced tour guides advise visitors not to climb the mountain after midday, as afternoon mists can result in people might getting lost and many occasional climbers may take longer than three hours. Clean water is obtainable from the streams that are crossed on the walk. 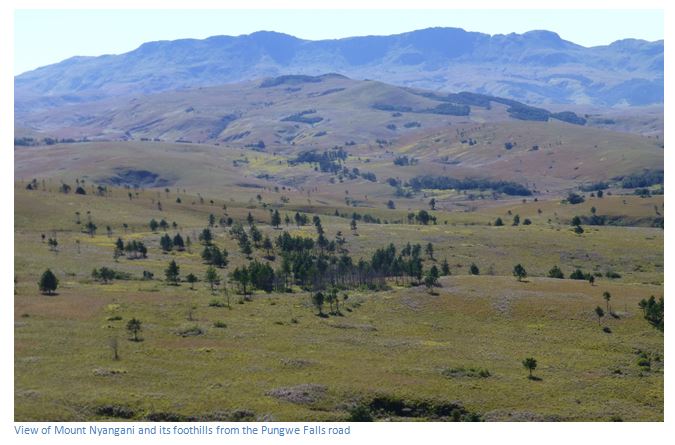 There is a long-held belief by the Manyika people living here that the mountain is a sacred highland area and that a vindictive spiritual presence on the mountain has been responsible for the disappearances; including two teenage girls, the daughters of a former Minister of Finance, who disappeared in 1981. Despite searches using helicopters, they were not found. In 1986, Robert Ackhurst, an eight year old vanished on the mountain and in 2013, Zayd Dada aged thirty one disappeared and has not since been located.

Local people say that when walkers come across a strange colourful snake, a smouldering clay pot with no fire in sight, or a brick of gold, it’s best to pretend nothing has been seen and move on quickly.

From the official car park the tourist path gradually ascends as a gentle walk along the edge of the upper Nyamuziwa River before crossing onto the main plateau north of the summit. From there it heads south across the plateau to the summit, which is on the dolerite sill some forty metres above the surrounding mountain area and has spectacular views in all directions,  well worth the time and effort in getting there.

The main plateau falls steeply to the east and west sides and visitors should not wander off the recommended routes without a knowledgeable guide. Guided walks can be organized through Far and Wide Zimbabwe, whose map guide is included below; or guides can be hired through ZPWMA. 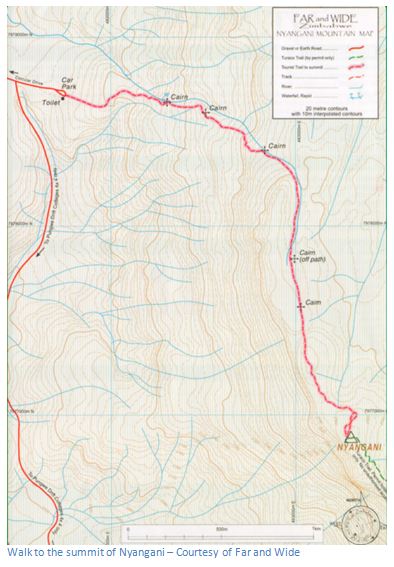 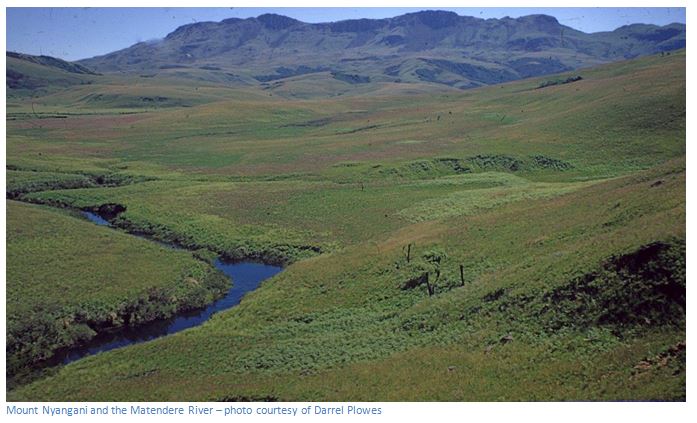 When to visit:
All year around Monday to Sunday 8am to 5pm
Fee:
Entrance free once the National Park fee is paid
Category:
Scenic
Province:
Manicaland