The most amazing thing happened the other day. I am with my sister, Mrs Duff, waiting to go up to Mashonaland to get married. We went for a walk and when we returned, we found a wire saying, “D.O.E.A. Hertzog sailing; take passage to Beira.” I met Bishop Gaul, newly appointed to the See of Mashonaland, who told me a little about the country, how it abounded in game, and how beautiful the kopjes were covered, with huge granite boulders, with huge trees growing between them, twisted to all kinds of fantastic shapes, and how the amazing ruins baffled everybody.

There was a terrific hustle to get ready and we set off for Durban and I went aboard the Hertzog at night, as the boat sailed at daybreak.

When we arrived at Beira, the landing was most interesting, but arrangements primitive. The ship was about a mile from shore and to reach the town of Beira, first I had to climb down the steep gangway to a rowing boat. When we reached shore, Beira was still some distance over the sand and the Royal Hotel had to be reached by trolley, a kind of miniature railway carriage which ran on a narrow-gauge line. 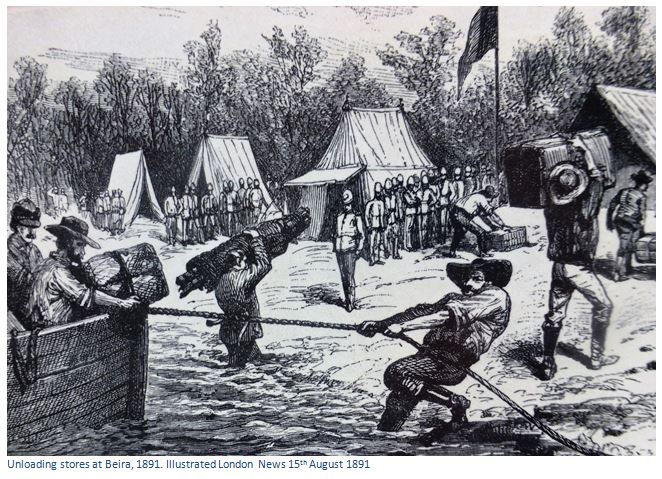 Lunch was served between 11 and 12 o’clock in a large corrugated iron room, lined with match-boarding. I sat at a table under a kind of punkah made of hot looking terra cotta coloured cretonne with pink and yellow flowers. It was broiling hot and the pattern made me feel hotter, and the punkah did not disturb the flies which flew about and settled on everything, including the butter, which was the consistency of salad-oil, and proved a lovely swimming pool for the flies.

There were crowds of men, all looking yellow and unshaven and all without their coats. I took them all for Portuguese brigands.  Many curious glances were thrown my way, a young girl alone in Beira with no friends visible, was an object of speculation amongst the men. I met some of them later; they were really charming Englishmen who had turned yellow from fever.

This morning I heard the train which was bringing David down, had been put on the line, and he would arrive at about 11 o’clock. Mrs Craven and I sallied forth to meet the train. The station is on the other side of a creek which divides the town of Beira into two parts – a fearsome smelly ditch, lightly bridged. The train arrived at last – such a queer little train, it looked like a toy engine; David jumped out. I had not seen him for nearly two years. He had got very thin and was the prevailing yellow-brown colour.

We tried hard to get the Consul to marry us before we went upcountry, but the regulations required three weeks residence. The Portuguese had the same rule, so as David could not get leave, he decided to go straight back.

Well I must really stop, as our train goes at 4 o’clock and this must be posted here. I feel like an African explorer already.

We arrived here about 3 pm; very glad to see the last of the toy train in which we spent two nights and a day. It was a thrilling journey for me. The toy train ran on very narrow gauge lines. The engine’s fuel is wood which is picked up along the line from dumps of native trees felled for the purpose. The consequence of the wood fuel is thousands of live sparks which blow through the windows onto one’s clothes and burn great holes before they are noticed. Everyone wears the oldest clothes they have got, so we all looked like tramps.

The carriages, of course, are very narrow, and it meant that I could not lie flat being 5 foot 8 inches and the carriage about 3 feet wide, so part of the night I had my feet out the window and part, my head; still being tired, I slept.

We carried food with us just in case of accidents. The train often ran off the line and the passengers were expected to help the officials to push it back on again. On we went through dead flat country seeing no sign of human habitation, but herds of animals of all kinds grazing together, buffalo, zebra, antelopes. The train went so slowly that passengers often got out and walked at the side of the track. They have been known to even shoot a buck whilst the train waited amiably on the line.

At last we reached the Pungwe River Bridge where we waited whilst the driver and guard of the train had a meal, or perhaps changed. The village is called Fontesville and is the limit of the tide which fills up the river daily. It was founded as headquarters for the Beira and Mashonaland Railway. It had proved fatal to hundreds as we saw by the little cemetery crowded with little white crosses. Most of the Italians who were hired and tempted by high wages died there and were replaced by Chinese. To me Fontesville was the most desolate place in the world. Wood and iron buildings, intense heat and an evil looking river running through it. The bridge over the Pungwe is just sleepers laid over trestles and when we crossed the water, black and evil-looking, swirled and sucked at the trestles 3 feet below eddying and swirling as it hurried down to the sea. Small steamers ply between Beira and Fontesville , but I think we chose the best mode of travel as sometimes the boats get aground on sandbanks, the channel constantly shifting and defying all pilots. Someone said the captains always carry a cargo of beer and waited on the banks until it was finished, and then moved off the bank. Some of the passengers potted at crocodiles, added to this the mosquitoes came in clouds, so I was thankful we came on the train.

The men were all greatly interested in my going all that way to be married and said they had not seen an English girl for months. The worst part of the journey was at Bamboo Creek, a truly green and snaky looking place. The next place was Macequece, a pretty little Portuguese town on the border with Mashonaland. There we met the carts which had brought Sir Alfred and his staff to meet the train. After a little time we got ourselves and our luggage into the Cape carts and started off at breakneck speed, uphill and down dale until we reached Umtali.

This part of the journey was really entrancing. We drove along between lovely trees, all red and gold which is spring colouring out here. The trees were not so large, but looked lacy and dainty. The hills rounded and covered with boulders. The road had been hastily made for Sir Alfred [Beit] so was considered good.  I was terrified as the six mules tore down a steep bank and up the other side. The driver was wonderful, his hands full of reins, but his mate did the whipping. There are no bridges over the many streams we crossed, but nobody minded.

Before we reached our destination we passed through Old Umtali, which has been built high up on the mountain side, but was found impracticable for the railway, so they decided to move the town to a lower level. It was my first glimpse of a baby town. It looked raw and unfinished, no proper streets of course, and many houses being dismantled to be re-built at the new site. The view from this place was very lovely as we could see for miles down below us. We had a scratch meal at the hotel  and then went on to New Umtali which we reached at 3pm, just too late to be married as the rule was no marriages after 2pm. It seems very silly, because people should be able to sign their names to a contract at any hour.

This is a house of the bungalow type built on the top of the hill. It was quite unfinished, the carpenters on the roof making a fearful din on the corrugated iron. The walls were unpapered, or unpainted, but the floors were in and I was glad to be on a floor which stood still. The tea was also very welcome. Mrs Craven was completely knocked up and went straight to bed.

David and I were left to our own devices. We were having our tea in the drawing room; the native servant had left the door open which was opposite another room. David said to me “just look up and into the other room” which I did.

I looked into the face of a man who was sitting at a table facing our door across the passage. David said “that is Mr Rhodes.” For the moment the eyes met mine. I, of course, was thrilled to the marrow seeing this great man face to face. I shall never forget the face. Wonderful ice-blue eyes, a magnificent forehead topped by waving white hair, but a peevish mouth. He was waiting for a deputation of workmen who arrived at that moment and the door was closed. He had camped out in the grounds of the Residency, but would not enter the house either to eat or sleep.

I heard him later on talking to his men in a high-pitched querulous voice. He wore an odd costume: white flannel trousers shrunk to his ankles, a pair of veld-schoens, and a funny shallow hat; but one look at that face made me forget all the oddities of his dress. He was pleased to see a woman coming to settle and make a home in the country.