Few frontiers are more spectacular than that between Zimbabwe and Mozambique which has a great mountain escarpment running, more or less, north-south. Two great rivers, the Zambezi and the Limpopo, have worn a way to the sea through the plateau-land, so that the Zimbabwean central plateau stretches from east to west and is bounded to north and south by the Zambezi valley and lowveld through which the two rivers run.

Two other rivers, the Sabi and Ruenya, complicate the terrain by cutting deep valleys through this mountainous escarpment forming the eastern border of Zimbabwe. The Sabi, flowing southwards and then eastwards, isolates the district of Melsetter from the main plateau. North of Mutare, the Nuagadzi on its way to join the Zambezi in Portuguese territory, isolates the high ground of Nyanga, where a type of scenery covering some 3,000 square miles exists that is nowhere else seen in Zimbabwe.

These mountains form part of a larger mountain chain that runs through Africa, from the Ethiopian highlands to the Drakensberg Mountains in South Africa. They consist of a complex mosaic of forests, woodlands, and grasslands. The fauna also shows affinities to the mountains of these areas, although several endemic animals are found here as well. The characteristic rainy and foggy climate makes this region suitable for coffee, tea, and dairy farming as well as exotic timber plantations. However, the hilly and inaccessible nature of these mountains has preserved native vegetation, as has the large Chimanimani National Park.

From Mutare take the A3 towards Harare crossing Christmas Pass. Distances are from the roundabout where the A3 and the Aerodrome Road intersect. At 10 KM turn right onto the A15 towards Juliasdale, 40 KM pass through Watsomba, 84 KM turn right at the intersection with the A14, 85 KM reach Juliasdale, 105 KM reach Inyanga Village.

In Zimbabwe, this area is known as the "Eastern Highlands." The northernmost area is situated in the Nyanga Highlands. From here, the ecoregion moves south through the Vumba Highlands (near the town of Mutare) to the Chimanimani Mountains and then to the Chipinge Highlands in the south, which include Chirinda Forest (on Mt. Selinda).

The characteristic montane forest-grassland of Nyanga National Park is wetter than the surrounding areas as a result of higher rainfall, the characteristic low cloud cover, early morning mist and heavy dew. These conditions result from the high land forcing the moist ocean air masses from the southeast to rise and cool and fall as rain, or forms low clouds from which forest vegetation can extract moisture. The annual rainfall in the ecoregion is highly variable, from 741 mm to 2,997 mm per year with east-facing slopes receiving higher rainfall than those facing west. Most of the rain falls in the summer months from November to April, while the months from May to July are drier. The annual mean temperatures range from a minimum of 9° C to 12° C to a maximum of 25° C to 28° C.

It contains the country’s highest mountain, Inyangani, and the highest waterfall, the Mtarazi Falls. The area has much of historical interest, from The Stone Age onwards. The area is popular with visitors with a wide range of accommodation and plenty of activities for the visitor, including walking and climbing and trout fishing in the local dams.  Main roads are generally in good condition and a 4WD is not required.

Mutare is the major city of the region, close to the Mozambique border and serving as an industrial centre for the region which is dominated by forestry activities, including saw-milling, paper and furniture, leather tanning from the wattle plantations, tourism, and specialized agricultural crops such as tea and coffee. Good roads lead from Mutare to Harare, Nyanga, the Vumba and Cashel Valley and the Chimanimani Mountains.

Just outside Mutare are the Vumba Mountains (“mountains of mist”) with a unique flora in the montane rainforest. After Cashel Valley is the biggest mountain range in Zimbabwe, the Chimanimani. Access to popular walking and climbing activities in the Chimanimani is by foot from the village of Chimanimani.  Furthest south is the Chirinda forest Reserve, a remnant of the original forests with the nearest town at Chipinge.

The most common vegetation type of this ecoregion is the submontane and montane grassland on the hillsides, but the most distinctive vegetation type is the relict moist evergreen rain forest, found on east-facing mountain slopes and in the deep valleys and ravines below 1,500 m. It is dependent on atmospheric moisture, rather than groundwater, for its water requirements. It occurs on the eastern slopes of the Inyangani Mountain and also on the Chimanimani and Bvumba Mountains. The best-known and largest patch of this forest is Chirinda Forest, situated between 1,076 to 1,250 m on Mt. Selinda, south of Chipinga.

A second forest type, dry montane forest, is more widespread within the ecoregion and is dependent on ground water and is therefore restricted to areas of permanent ground water. It is found at higher altitudes than the moist evergreen rainforest, from about 1,500 m to 2,000 m. The forest has a well-developed tree layer with an average canopy height of about 12-15 m. The individual trees are rarely large and no particular tree species dominates. 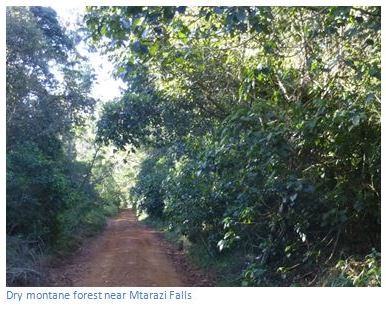 Miombo woodlands are scattered throughout the ecoregion, occurring on well-drained slopes up to an elevation of 2,100 m. These woodlands vary from closed to open and are dominated by the deciduous Brachystegia spiciformis, B. tamarinodoide, and Uapaca kirkiana. The trees are fairly small, from 3-6 m in height. 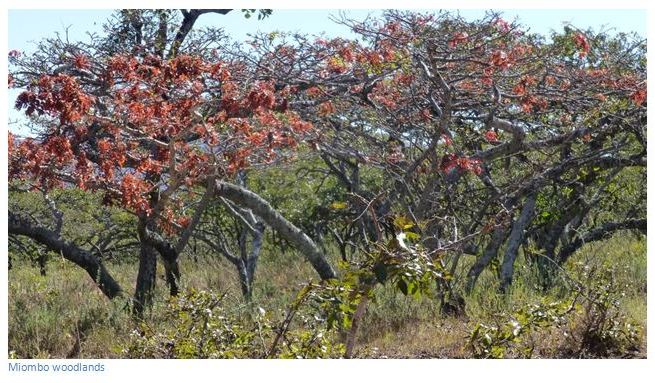 In the southern portion of the ecoregion around Chipinge, as well as along the western slopes of the Nyanga Highlands and on the southern slopes of Mt. Gorongoza, there occurs a very distinctive vegetation type, a semi-evergreen high rainfall tree savannah dominated by Parinari curatellifolia, an evergreen tree growing to about 15 metres tall.

On the Chimanimani Mountains, above about 1,200 m, heathlands are found. These are restricted to the poor, acidic quartzite-derived sands.

Tree ferns are а very noticeable part of the Nyanga flora, with the common tree fern occurring in the moorlands and the forest tree fern in the rainforests.

Black wattle, introduced іntо plantations outside the Park spread rapidly іntо several parts of the Park as has Pine, planted between Rhodes and Mare Dams. By 1988 it was estimated that around 40% of the Park had been invaded by these alien species. The Park Authorities maintain а continuous eradication programme.

Current Status
The moist evergreen rain forests were previously much more widespread having been cleared for agriculture over the last 100 years. They occur on the lower, fertile, well-watered slopes of the highlands and these characteristics are sought by commercial and subsistence farmers. Chirinda Forest Botanical Reserve includes 6 square kilometres of rain forest and is by far the largest remaining area. The Bunga Forest, the Vumba Botanical Reserves, and behind Mt. Inyangani in the Nyanga National Park contain a few small relicts of lowland rain forest

The Chimanimani National Park, which covers an area of 171 square kilometres, is perhaps the most important protected area in the ecoregion, as it includes representative portions of all the vegetation types.   In particular, it conserves the only high-elevation heathland vegetation in Zimbabwe. The dry montane forest is also well protected, with an estimated 120 square kilometres within the Park.

There is a remarkable diversity of mammals found in this ecoregion.  The Park is best known among wildlife conservationists for the blue duiker (Cephalophus monticola) and samango monkeys (Cercopithecus mitis). Neither animal is found outside the Eastern Highlands. The rare tree civet (Nandinia binotata), squirrels such as the sun squirrel (Heliosciurus mutabalis) and the red squirrel (Paraxerus palliates), bushbabies such as thicktailed bushbaby (Otolemur crassicaudatus), and fruit bats (including the rare Myonycteris relicta). On the ground, the common duiker (Sylvicapra grimmia), bushpig (Potamochoerus porcus), dark-footed forest shrew (Mysorex cafer) and the four-toed elephant shrew (Petrodomus tetradactylus) are found. The African clawless otter is common in the upper Kairezi River, in the north-east of the Park. The Inyangani River frog is in endangered amphibian found in rocky, fast-flowing streams.

Leopards (Panthera pardus) are found throughout this ecoregion and there are occasional sightings of buffalo and lion and hyena that stray in from the Mozambique lowlands. The more open grasslands and heathlands contain fewer mammal species, with the klipspringer (Oreotragus oreotragus), sable antelope (Papio cynocephalus), eland (Taurotragus oryx) kudu, reedbuck and hyraxes (Procavia capensis) being the most conspicuous.

A rich and varied bird life is found here, including forest species such as the trumpeter hornbill (Bycanistes bucinator), Knysna and purple-crested louries (Tauraco corythaix, T. porphyreolophus), crested guineafowl (Guttera pucherani) and the crowned eagle (Stephanoaetus coronatus). The grasslands support species such as the secretary bird (Sagittarius serpentarius) and Shelly’s francolin (Francolinus shelleyi). In the heathlands of the Chimanimani Mountains, Fynbos species such as Gurney’s sugarbird (Promerops gurneyi) and the malachite sunbird (Nectarinia famosa) can be seen. Two endemics, the Chirinda apalis (Apalis chirindensis) and Roberts’ prinia (Prinia robertsi), and the rare Swynnertons Robin (Swynnertonia swynnertonia VU) occur in this ecoregion. The Chirinda apalis is restricted to the deep forest whereas Roberts’ prinia is found on the forest margins.

Over 400 species of Birds are either resident in Zimbabwe, or migrate here in the summer months of October to April from North Africa or Eurasia.

Lake Gulliver and the Mare, Udu, Purdon and Rhodes Dams have been stocked with trout from hatcheries maintained by the Department of National Parks. The rainbow trout is most widespread within the Park's dams and streams, but brown trout and American brook trout are аlsо present.

Most of this ecoregion's amphibian and reptile species are terrestrial, finding shelter in the forest leaf litter and inside rotting logs. These species include skinks, geckos, lizards, frogs, toads, and some snakes. Terrestrial forest snakes include the African rock python (Python sebae natalensis, VU), the Gabon viper (Bitis gabonica gabonica, VU) and the forest cobra (Naja melanoleuca). Arboreal forest species include chameleons, the tree agama (Agama atricollis), the yellow-spotted tree frog (Leptopelis flavomaculatus), and tree snakes. The most common arboreal snakes are the green mamba (Dendroaspis angusticeps) and the boomslang (Dispholidus typus typus). The grasslands and heathlands support a number of snakes such as the puff adder (Bitis arientans arientans) and the herald snake (Crotaphopeltis hotamboeia).

When to visit:
All year around
Fee:
Entrance and accommodation fees are payable
Category:
Scenic
Province:
Manicaland