The previous year the pioneer column on 11 July 1890 had crossed the Shashi River at the beginning of its two month trek to Fort Salisbury (now Harare) Major Leonard, a professional and experienced soldier, was appointed commanding officer of E Troop and had the task of holding Fort Macloutsie and later Fort Tuli and so did not accompany the pioneer column.  This account is of his journey with Herbert Molyneux and two others with a scotch cart to carry their luggage from Fort Salisbury to Beira and which began on Tuesday 20th October 1891.

The previous night he tells us he should have been invited as a guest to dine at the BSA Police mess, but was asked by Forbes, at Pennefather’s instigation, if he would mind dining out that night to make room for Rhodes, Jameson and Lord Randolph Churchill. When he returned and went to bed he could not sleep as his room was close to the dining-room, so the hum of conversation, scraps of which he could not help overhearing, kept him awake.

He meets Lord Randolph, who despite being lavishly entertained by Major Leonard at Fort Tuli, fails to recognize him and probably in irritation, Leonard  tells the story that his noble lordship is known for giving his guests tea, while he helps himself to champagne!

He describes the journey as one of the most enjoyable trips he has ever experienced – one long and delightful picnic in fact! In spite of the scotch cart, he walks almost every mile of the way saying the country between Salisbury (Harare) and Umtali (Mutare) looked to him like a farmer’s paradise, an artist’s dream, a dreamer’s Utopia, to a sportsman a living reality abounding in game and to a naturalist a retreat beyond the wildest conception of his imagination. Indeed!

They passed others who like them were homeward bound, many to avoid the rains. Deerhurst with pack donkeys, Maund travelling with a waggon and horses and valet, Sauer and Williams also very comfortable. They reach Umtali on the 30th, a journey of ten days, and Leonard describes the settlement (old Umtali, the second site, where the United Methodist Mission is today) as not nearly so big as he expected. He notes that Bishop Knight-Bruce has, with an evident eye to the beautiful, chosen this place as his headquarters and that the six nursing sisters, under Miss Blennerhasset are still here.

He thinks the new township of Umtali has been laid out on an excellent site, with charming surroundings, to which an exodus will shortly be made. Maund, Williams, Sauer and he take a look at some of the gold properties, especially the Sabi-Ophir reef and the prevailing opinion is that Umtali and its neighbourhood will be a great success.

Next morning, the 2nd of November, he and Molyneux start for Massi-Kessi (Macequece, now Manica) They walk through low -lying marshy country and then after a steep climb get in amongst grass-covered, rugged hills where wild raspberries and plantains are quite common. The mountain streams remind him of the Himalayas and they breakfast under a large tree until someone spots a snake coiled not far above their heads which they quickly despatch. This reminds Leonard of an old Hindi couplet: “From the sting of a scorpion you weep, from the bite of a snake you sleep.”

They resume their walk passing from this wild and picturesque scenery into wooded hills about halfway to Massi-Kessi. At midday they reach Lorenzo’s store, a poky little mud and wattle shanty, where they have tinned salmon and hard biscuit, washed down with Vino Tinto. He notes he watered his down, but Molyneux did not and suffered for it next day! By evening they reach Massi-Kessi.

Next morning he goes to the fort to try and get some carriers, but without success. He notes it has neither guns nor troops and that the fort is not formidable in itself, but without these is still less so. Fortunately he meets Williams and Sauer, who have carriers and next day they cover over nineteen miles (30 kilometres) he gives a general outline of their daily routine.

They start each morning before sunrise, after a cup of cocoa or coffee. After walking 8 miles (13 kilometres) they halt for an hour and a half for breakfast and a smoke, then continue another 5 miles (8 kilometres) until midday and rest in the heat of the day before a third walk of another 8 miles in the cool of the afternoon and early evening, so their daily average was 21 miles ((34 kilometres)

They had by now crossed the Revue three times; Leonard thought it a beautiful river, very like a Donegal trout stream! Their third march brought them to Chimoa (present day Chimoio) edge of the tsetse fly belt. On the 8th November they breakfasted at bamboo Creek and on the 9th reached Sarmento where he says the Portuguese have a few huts, a store with nothing in it, two or three slovenly soldiers and a creature who calls himself the Governor. All through the fly belt we had passed at different stages, about twenty waggons belonging to Johnson, Heany and Borrow and here were two brand new coaches, all of them abandoned because of the oxen dying of the fly and rotting from exposure to sun and rain. Our night’s repose at Sarmento was much disturbed by heavy rain and the mighty roaring of a lion that was prowling in the vicinity of our tent. As a game country this is the finest in the world and I am not exaggerating when I say that for days we walked through countless herds of deer, antelope, buffalo and every wild beast imaginable. Indeed, a good shot, without leaving the road could have slaughtered them wholesale.

On the 11th they saw the Pungwe for the first time and soon reach Bobbert’s store, about 5 miles (8 kilometres) from Neves Ferreira where they meet Mr and Mrs Theodore Bent (who made the first detailed examination of Great Zimbabwe and wrote The Ruined Cities of Mashonaland in 1892in which he concludes they were built by Semitics, an idea not accepted by archaeologists)

The river steamer seemed to have broken down (or grounded on the sandbanks) so they hired a lighter, sailing and drifting down through a low-lying mangrove country of swamps and marshes. Leaving on the evening of the 13th they ought to have reached Beira the following night, but a strong headwind sprang up which prevented them from tacking, tore the sail to pieces and bumped them in an unmerciful manner against the south bank of the Pungwe where they had to tie up for the night. The two nights we spent in this lighter were an experience Leonard says he will take into the next world. There was no rest, the mosquitoes were in appalling swarms and fiendishly bloodthirsty and those never-to-be-forgotten nights were a hell let loose. Nothing kept them out, tobacco smoke they treated with contempt and so the small party were wild with delirium when they arrived in Beira on the 15th of November. 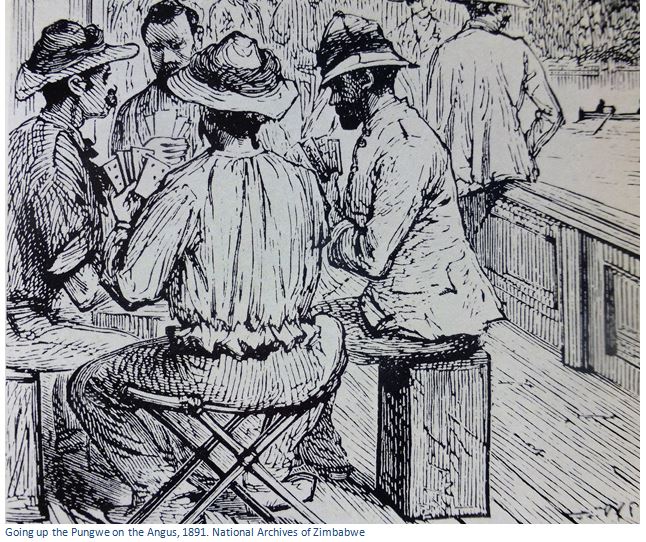 Leonard is very critical of Beira and walking about in the deep loose sand he finds very trying. Due to scarcity of water they had to wash and bathe in the Pungwe River which was saline. There are several stores and two so-called hotels where you can get food, such as it is, but no board, so they pitch their tent with Williams and Sauer in Johnson and Co.’s compound, with Ewing the agent. The local commandant tells him the fort is just five years old, but from its dreadful state of dilapidation, Leonard judges it to be a hundred years at least, with one bastion fallen in and the ditch filled with rubbish and garbage that stinks horribly. The only thing he seems to enjoy is walking with Sauer to the farthest point of the spit, on which a lighthouse is being erected and with a fine view of the ocean.

Bishop Knight-Bruce has been waiting over a fortnight for a steamer, but they are lucky as the Norseman arrives and he ends: But I am on board the Norseman, which waits for no one, and she is off in an hour. So adieu until next I see you.