National Monument No.:
64
Why Visit?:
How to get here:

From intersection of Harare to Mutare Road (A3) and turnoff to Nyanga (A14): drive along the A14 towards Nyanga, 0.95 KM turn left onto tar road at signpost to Harleigh Farm and Diana’s Vow, 14.5 KM continue past the former Harleigh Farm tobacco barns, 18.1 KM continue past road intersection, 29.1 KM turn right onto farm track marked Diana’s Vow, 29.4 KM reach Diana’s Vow car park. The road is in poor condition and bumpy, although passable for 2WD vehicles.

HOW TO GET BACK TO THE A14 TO INYANGA 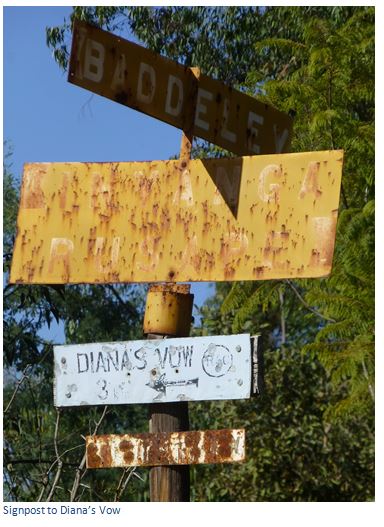 Elizabeth Goodall whose superb paintings of rock sites are kept at the Zimbabwe Museum of Human Sciences (formerly the Queen Victoria Museum) considered the scene as representing a ceremony for a dead king elaborately wrapped in bandages. She assumed the central figure is wearing a mask and draws parallels with their use in Egyptian life, where it was thought the dead person could better observe the living through the medium of a mask. Further, she assumes the smaller figure below, is the king’s favourite wife, ready to follow the deceased into the spirit world. 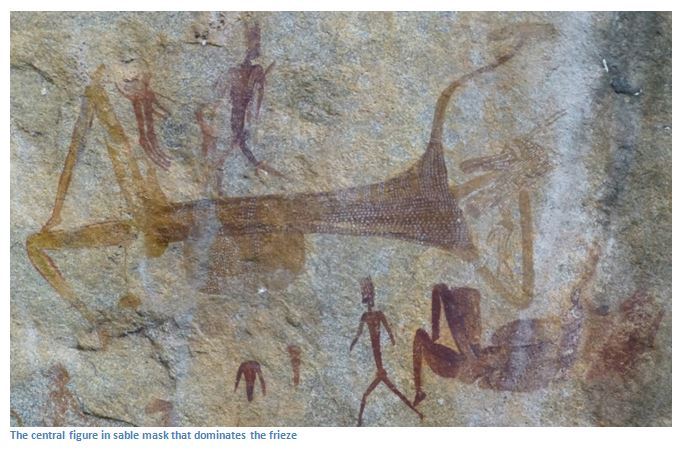 Cran Cooke another great contributor to Zimbabwe’s rock art studies identifies the mask as that of a sable antelope and queries the burial scene proposition; but despite acknowledging this as one of the most interesting rock art panels in Zimbabwe, he does not advance any new ideas. He does say however, that Diana’s Vow can be reached with ease in a normal motor car, a surprising reflection of how much the condition of secondary roads in Zimbabwe have deteriorated since 1974.

Lee and Woodhouse in Art on the Rocks of Southern Africa interpret the scene as “a glorious beer drink” an improbable explanation which cannot be taken seriously.

All these explanations draw their source from societies that were unknown to the hunter-gatherer society from which the painters of this rock art panel came and can therefore be completely discounted. 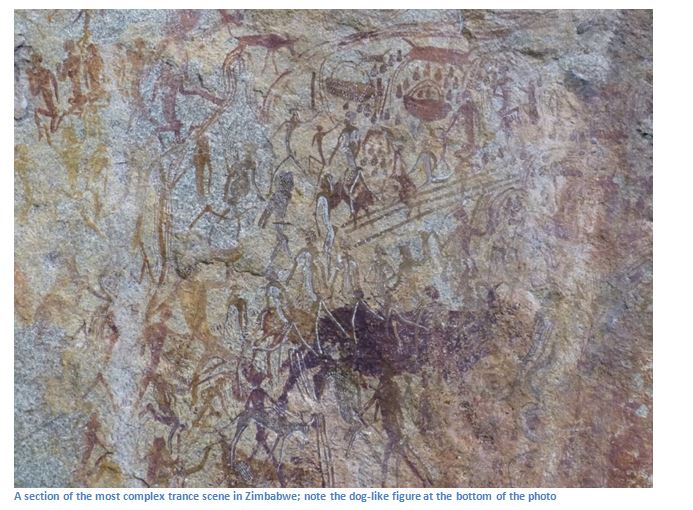 Much current rock art theory revolves around trance theory of which the leading author has been Dr J.D. Lewis-Williams of the Rock Art Research Institute of South Africa. The late Peter Garlake, Zimbabwe's eminent author on rock art, believes the central figure wears the markings of a sable antelope and is in trance. The figures which surround him are participants in a sable dance, the numerous dots of white on the figures represent n/um, or potency, which has been generated by the dancers and the trancer. The trancer, also embellished with the white dots of potency, will enter the spirit world to plead with the San Gods on behalf of the community to ease some communal tension, or cure sickness, or bring relief in the form of rain.

The extensive use of white pigment, comparatively rare in Mashonaland rock art and use of white stripes, dots and head-dresses  on the human figures, some masked, surrounded by their equipment comprising baskets with handles, skins, bows, quivers and images of fruits, or roots, dogs, a chicken, a snake, all enclosed in a triple series of curved lines suggests the entire panel makes up a single scene. 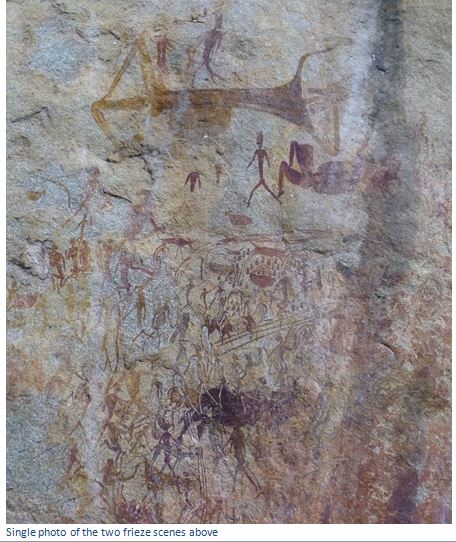 When to visit:
All year around Monday to Sunday 6am to 6pm
Fee:
An entrance fee is chargeable
Category:
Rock Art
Province:
Manicaland