The border between Zimbabwe and Mozambique runs north / south along the highest peaks of the Chimanimani’s. These mountains are really for those who like to explore by foot and feel the grandeur and majesty of being alone in a wild place. ZPWMA say they have a deliberate policy to limit development within the National Park to preserve its natural, pristine beauty and the wild landscapes of this mountainous area.

For walkers’ familiar with the south-western Cape the Chimanimani feels and looks very similar, the difference being that Chimanimani has far fewer visitors and a much greater sense of isolation and a feeling of being very much in touch with wild nature.

The Chimanimani National Park also includes the Eland Sanctuary. It is a mountainous terrain with peak heights of 2,436 metres (7,992 feet) and is the source of many streams and springs and natural falls such as in the Bridal Veil Falls in the Eland Sanctuary and spectacular views of the Pork Pie Mountain Range.

Wildlife in the Chimanimani National Park is not abundant, but includes species such as eland, sable, bushbuck and blue duiker, and less frequently seen are klipspringer and leopard.

Although the entire mountain range of about 50 kilometres is called the Chimanimani, the name really only applies to where the Musapa River passes through the range. The name Tshimanimani (to be squeezed together) describes the narrow gorge through which the river forces a passage. 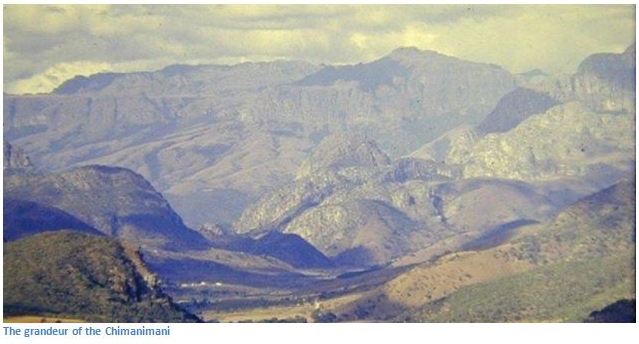 The nearest base is Chimanimani village (previously Melsetter) and so walkers need to stock up with all essentials whilst in the village because nothing except water from the streams is obtainable within the National Park! The rugged granite mass of Chimanimani is a constant presence that towers over the small town and the light on the mountains keeps changing, and provides any ever changing backdrop.

For visitors who want to experience the challenge of the Chimanimani’s, the usual place to start is at base camp, about 19 kilometres from the village. There will be a game scout at the base camp to give advice to visitors on the best route, but your average walker should take about two to three hours to the mountain hut on the Bundi River. Base camp has a car park, information office and basic facilities and is available to visitors for overnight stays for a small charge. 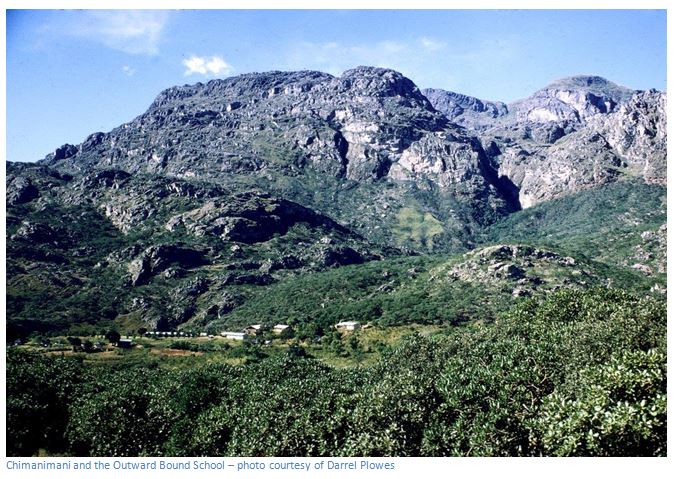 Guided hikes up the mountain are very much recommended, but be warned most are quite arduous and require a certain degree of fitness and stamina. There are four distinct ranges within the Chimanimani separated by streams and broad valleys, most being within Mozambique. The highest point in the Chimanimani’s is at Mount Binga in Mozambique at 2,436 metres.

For those who like the challenge of exploring further than the average day-tripper and are happy to carry all their food and shelter the possibilities are endless and every ridge opens up new perspectives and scenery, but stops are advisable to take in the bizarrely eroded granite rock forms on Mawenje Mountain and look out for the wildlife. The mountain flora includes the rare Barrosus Palm tree and other endemic flora.

There are no roads around the park, just footpaths which have been tramped for millennia by travellers seeking a route into the interior of modern day Zimbabwe from Mozambique and who have been prepared to face the danger of wild animals and deadly diseases. The paths wind up the mountain slopes through deep forests and then emerges onto a grassy plateau where different varieties of protea, Erica, Leucospermum and golden-yellow everlasting (helichrysum nitens) all flourish.

The mountains are made up of water-deposited sediments which have consolidated over 1.25 billion years into sugary-white quartzite, quart schist, limestone and calc-schist (the Frontier system) which is evident as the pathway reaches the top of the Chimanimani Range and reveals an outlandish collection of giant rocks eroded into twisted and bizarre shapes. These upper valleys of the Bundi River act as a vast natural sponge with the river winding across the plateau through tannin brown crystal pools and feeding into the southern lakes before cascading down the slopes and then tumbling down Martin’s Falls, named after Gideon Martin, an early settler and the first European to report them. 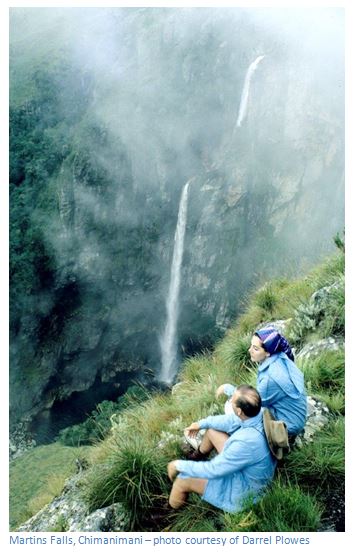 Visitors to the Chimanimani’s are allowed to camp free of charge anywhere within the National Park, except at base camp. Camping is at the visitors own risk and includes sleeping in Terry’s or Peter’s caves, actually disused mine shafts, or the mountain hut, a two  to three hour hike directly up Bailey’s Folly for those that like challenges, or up the Banana Grove (actually strelitzia!) route for those less fit. The mountain hut, at 1,630 metres, acts as a refuge and rest point and is un-furnished and has ablution and cooking facilities for up to 20 people at a time on a communal basis, which means no exclusive party use, it must be shared and bookings cannot be made.

Visitors should ensure they leave their campsites in the condition they found it and take out all rubbish and are requested to do everything they can to prevent veld fires.

The walk up Banana Grove is really enjoyable, the sheer cliffs on either side almost blocking out the sky, baboons barking to remind walkers that they can see them from the very top of the cliffs, a duiker may spring from cover and disappear just as quickly; the slopes covered alternatively with the Brachystegia woodlands and tropical undergrowth. Leopards love this habitat, but are rarely seen, eland were once common in the hills and plateaus of Chimanimani, but these days are so scarce as to be almost never seen. Near Peter’s cave is a spectacular waterfall, where men and children for generations have brought out their inner dare-devils and challenged each other to leap the seven metres into the icy water below! A further challenge is swimming in the icy waters at Digby's waterfall.

A word or two of warning before hiking overnight in the Chimanimani’s. In the rainy season, do not camp near a river; stay on higher ground as flash floods are common and dangerous. Also, during the Zimbabwe independence war, mountain passes in the Chimanimani area were used by guerrilla fighters between Zimbabwe and their camps in Mozambique; landmines were laid and they continue to be a hazard in the area, particularly after heavy rain.

The few paths once barely visible in the grass are now well trodden by illegal gold panners walking through the National Park, either carrying supplies in or product out! This illegal traffic is not new to these hills; immigrants of both countries have used these paths for generations as the borders are unmarked. Walkers are likely to observe small groups of gold panners and spot, particularly on the Mozambique side of the mountains clear evidence of their riverbank and riverbed activities. Gold panning problem is a major challenge for ZPWMA to control with limited rangers and resources and is symptomatic of the national economic challenge with people forced to find whatever means they can to feed their families. As usual in Zimbabwe most times walkers will be greeted warmly, particularly if they are courteous and friendly in return, but visitors have been robbed of camping equipment, so take the simplest of precautions by informing ZPWMA staff of your movements and exercise common sense. 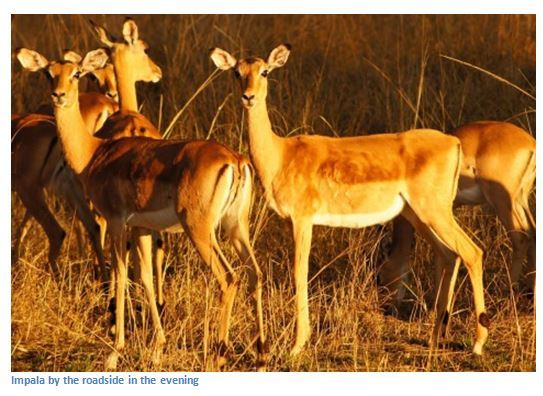 Best time of year to go? Temperatures drop below zero degrees Celsius in winter (May-August) and the rain may spoil the hike if you are without appropriate equipment in the wet season (November-February). If new to the region – March/April and August/September are always good times to visit this National Park. Walkers should really carry warm, wind and waterproof clothes, a warm hat and a really warm sleeping bag and torch; also a basic first-aid kit with antihistamines, plasters, arnica oil for sprains and an antiseptic for stings and cuts.  On the edge of the Park is the “Outward Bound” organisation, reputedly one of the best world-wide and known for its educational courses, mountaineering, abseiling, team-building, super-fitness training and orienteering to name some of the activities they offer.

For those less inclined to hike in the mountains, then head to Corner Camp near the Chikukwa rural village, north of Chimanimani village through Martin Forest where visitors can swim in the Muhohwa River, or visit the Muhohwa Falls. Other things to do include seeing the rare Barrosus Palm tree and the unique rock formation of the Mawenje Mountain, or go south to visit the Nyakwaha and Haroni Botanical Reserves, as well as the Haroni and Mukurupiri waterfalls.

The hut at 1630 metres above sea level is not furnished. It acts as a refuge and rest point and may be used on a communal basis, but not exclusively by an individual party. The ablution and cooking facilities are ideal for up to 20 visitors. However, daring visitors have the option of spending the night in either Terry's or Peter's caves (disused mine shafts).

Visitors are also allowed to camp free of charge anywhere within the park except at the base camp, however it should be noted that such camping is at the visitors' own risk. 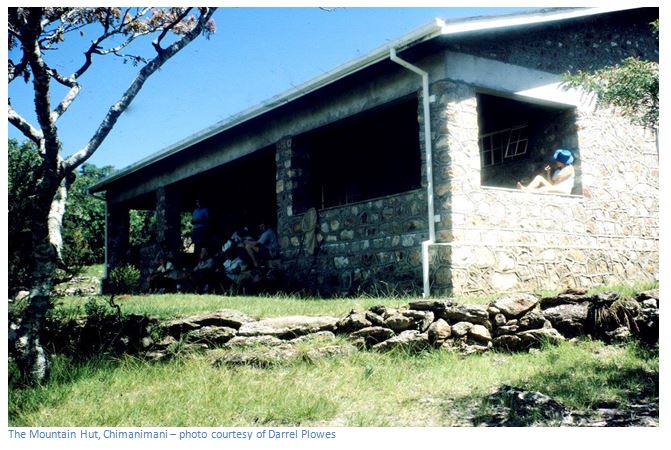 The base camp is available for limited numbers of visitors wishing to spend the night at the foot of the Mountains. There is a car park, an information office and ablution facilities at the base camp and visitors have to pay the prevailing camping rates for use of this facility.

The Eland Sanctuary is located within the Chimanimani National Park and development within the area has been limited in order to preserve the natural, pristine beauty and wild landscapes of this mountainous area. Forest lovers are will take delight in the virgin forests of the area. Wildlife species found in the area include eland, sable, bushbuck, blue duiker, klipspringer and an occasional leopard. 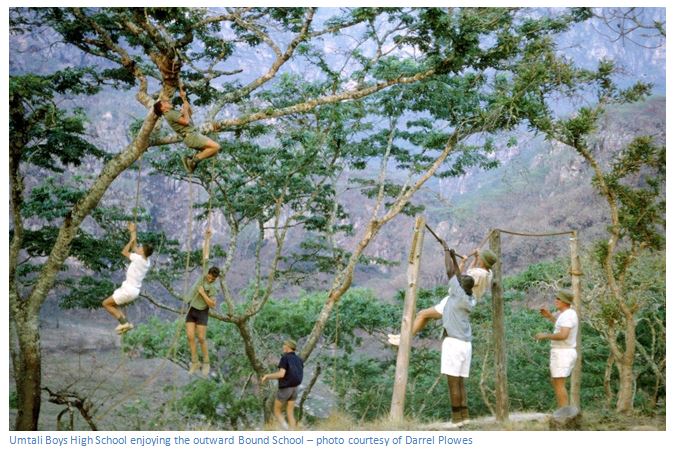 When to visit:
All year around Monday to Sunday 8am to 5pm
Fee:
Entrance and accommodation fees are payable
Category:
Scenic
Province:
Manicaland