The magnificent specimen at the centre of this grove of Eucalyptus botryoides is believed to be the tallest in the world.

They were planted by the Meikles family about 1904 and the Big Tree when measured in 1977 was more than 63 metres tall.

Located in the deep well-watered soils of Penhalonga by the Mutare River, they have flourished since being imported from their home in New South Wales, Australia.

From Harare to Mutare on the A3 pass the A15 turn-off for the Nyanga Road. 2.2 KM later turn left before Christmas Pass at the petrol station on the road signposted for Penhalonga. Drive to Penhalonga Village passing at 5.9 KM on the right the La Rochelle turnoff, 7.2 KM pass the turnoff on the left for the Fairbridge Road, 8.8 KM pass the police station, 10.4 KM pass John Meikle Road to Redwing Mine. At 12.5 KM immediately after rounding the bend, turn right off the tar road onto a farm track. At 13.1 KM pass the turnoff to the right for the Inodzi Gums, 14.2 KM pass the old Dairy on the left, 15.6 KM turn left at the fork, 15.8 KM turn left at the next fork and head down into the valley and then head into the trees. At 17.7 Km reach the parking area and walk 100 metres to the Big Tree. The above GPS is only approximate and visitors wishing to visit should make use of the contact details below.

For a local guide, I strongly recommend contacting Gary Goss in advance of your visit and meeting at La Rochelle. This is an artisanal gold-mining area and local people can be suspicious of visitor’s intentions. Gary is well-known and respected. Mobile  0772252001, or 0772249011.

Lyn Mullin and his colleagues in the Forestry Commission, Richard Barrett and Lisle Orpen and many of their forestry colleagues, botanists, ranchers, National Parks officers, farmers and tree lovers contributed to the magnificent volume Historic Trees of Zimbabwe which highlighted the variety and importance of Zimbabwe’s trees. The Meikle family, who have owned and occupied Mountain Farm since the end of the nineteenth Century, are responsible for the survival of this remarkable tree, the tallest of its species in the world.

Mountain Home Farm is adjacent to Inodzi Farm and John Meikle’s father was responsible for laying out and planting the pine and eucalypt forests that line the slopes and valley floor of the Mutare River today. His efforts were recognized with the establishment of the John Meikle Forest Research Station which has become the main tree-breeding station in Zimbabwe. His son continued and expanded his work, with the result that these trees are their legacy. 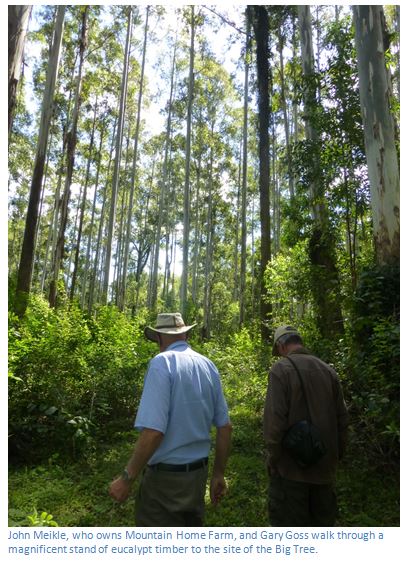 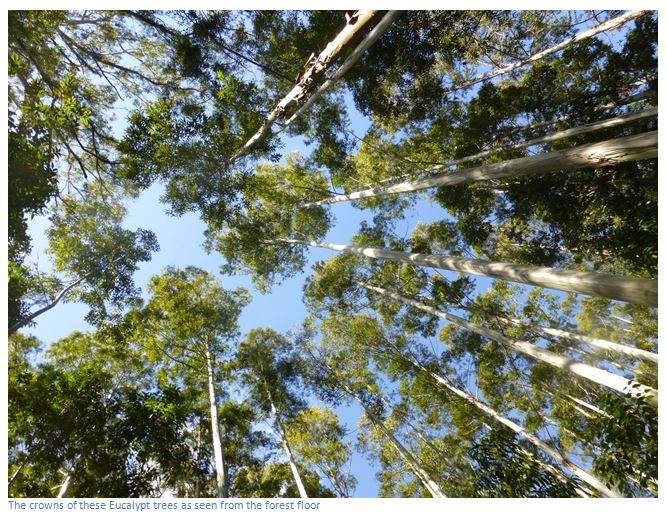 The Big Tree and its companions stand a few hundred metres from the Mutare River which has backed up into an impressive dam. Eucalyptus botryoides is indigenous to Australia along the coasts of southern New South Wales and eastern Victoria where it commonly reached 40 metres and sometimes 45 metres in height. However, the over 63 metres of this specimen exceeds them all and Lyn Mullin quotes the late professor L.D. Pryor of the Australian national university, Canberra with saying: “it must be the biggest botryoides in existence.”

In Australia, Wollongong’s Native Trees, says the tree was often known to old woodcutters as the “Wollybutt” and goes on to say the tree is commonly found in deep, fertile soils at the edges of rainforest and at the edges of moist gullies. Its’ other names are the southern mahogany and bangalay.

Eucalyptus botryoides and Eucalyptus saligna are considered two distinct species in Australia occupying separate habitats; the first along coastal strips and bark described as grey, shortly fibrous, or tessellated to stringy; the second further inland and with smoother bark. Lyn Mullin and his colleagues consider that the smooth bark of the upper branches of the Eucalyptus botryoides on Mountain Home may mean they originated in the Bateman’s Bay region of New South Wales, a zone of transition between the two species. 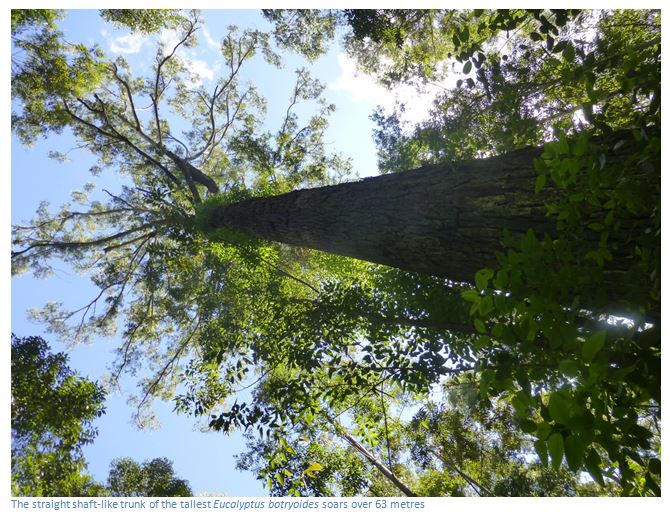 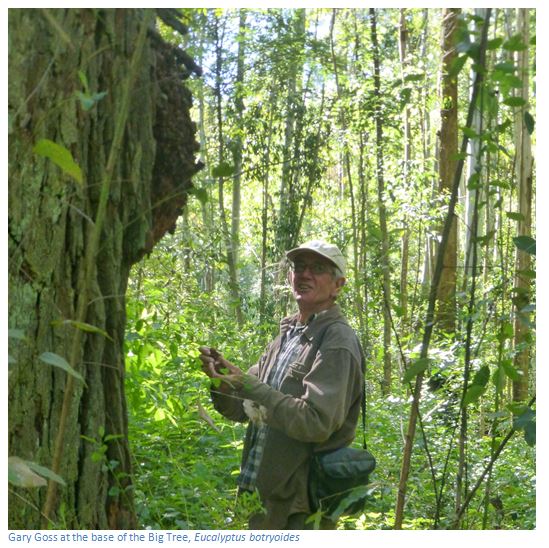 The photo above illustrates the swollen woody base known as a lignotuber, which containing a mass of buds and food reserves in the form of starch, and which can reach 6 metres in diameter; it can regenerate after a bushfire by resprouting. The tree also drops branches and these have been known to grow roots. Australian trees have been dated at 600 years of age.

When to visit:
All year around
Fee:
Not applicable
Category:
Cultural
Province:
Manicaland