Home > Manicaland > The 1903 Ivel Agricultural Motor No 141 in the Mutare Museum; one of only seven that still exist today

The 1903 Ivel Agricultural Motor No 141 in the Mutare Museum; one of only seven that still exist today

Part of the excellent Mutare Museum display. Be sure to ask a Museum Attendant to show you the Ivel in the Transport section of the Museum; it is one of the earliest tractors in the World. 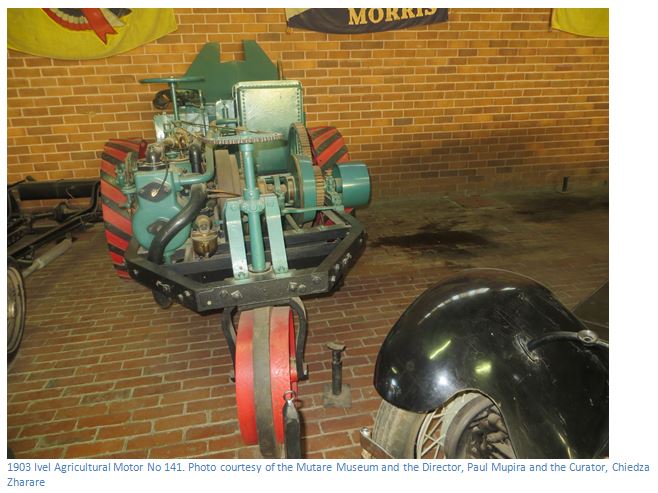 The inventor of the Ivel was Dan Albone (1860-1906) the youngest of eight children. On his ninth birthday he received a Boneshaker bicycle, and began cycling and by the age of 13, he had designed and built his own bicycle, complete with suspension. When he left school he began a mechanical apprenticeship with a local firm of millwrights and engineers.

In 1880 at the age of 20 he founded the Ivel Cycle Works making bicycles for himself and his fellow sports cyclists and won over 180 local and international one and two mile races. He made the Ivel Light Roadster and the Ivel Racer and in 1882 he introduced the Ivel Tricycle. In 1885 John Starley exhibited his Rover Safety bicycle which Albone copied and modified to produce the Ivel Safety cycle 1886. This became very popular with sports cyclists and On 5 October 1886 George Pilkington Mills, on an Ivel Safety, achieved a world record 24-hour distance of 294.5 miles (474.0 km).

By 1893 a general downturn in the economy led to Dan Albone putting the Ivel Cycle Works into voluntary liquidation. 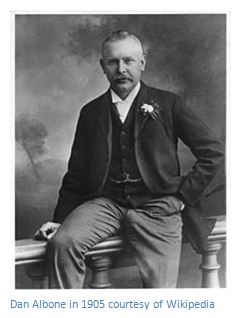 In 1886 Albone applied his knowledge of low friction wheels to produce a strong, light-weight pony trap with a steel axle with ball bearings and bicycle type steel and rubber wheels. The result was smooth and fast, and the pony trap became very popular.

In the 1890s many of the former cycle manufacturers, such as Peugeot, Morris and Albone moved into motor manufacture.  Albone developed a motor car, based on a 2.2 kW (3.0 hp) single cylinder Benz engine. He drove a prototype around Bedfordshire in 1898, and exhibited it in London in 1900. A five seat version was developed, called the Ivel Landaulette, with a 6 kW (8.0 hp) twin cylinder engine with electric ignition and independent suspension.

A natural progression was the Ivel motor bicycle, in 1901. This was a strengthened bicycle, with a 1.1 kW (1.5 hp) engine driving the rear wheel.

Horses had been used for centuries on farms in England on farms, but from around 1850 steam-powered portable engines [see the photo in the article featuring the Kadoma Steam centre] and self-propelled traction engines had been gradually introduced for agricultural work. [See the photos of traction engines in the articles featuring the Mutare Museum and the National Archives]

Dan Albone visualized a light-weight petrol-powered general purpose agricultural vehicle; by November 1901 he had completed his design, and filed for a patent on 15 February 1902. On 12 December 1902 he formed Ivel Agricultural Motors Limited calling his machine the Ivel Agricultural Motor; the word 'tractor' did not come into common use until later.

His agricultural motor won a silver medal at the Royal Agricultural Show in 1903 and 1904; and in February 1904 an Ivel Agricultural Motor won a Gold Medal in the Chester Ploughing Match; this being the first occasion on which the competition was open to mechanically propelled ploughs.

About 500 agricultural motors were built and exported all over the world. The original engine was made by Payne & Co. of Coventry, but after 1906, French Aster engines were used. Over time it became heavier and more powerful, but after Dan Albone’s death in 1906 the company continued building tractors to a virtually unchanged design and failed to keep pace with its rivals. It sales went into a decline after 1910 and in 1920 it went into receivership. The assets were bought by United Motor Industries Limited.

The Ivel Agricultural Motor was light, powerful and compact. It had one front wheel, with a solid rubber tyre and two large rear wheels like a modern tractor. The engine used petrol, or paraffin and was named after the Ivel River in Bedfordshire, England. It had one forward and one reverse gear. A pulley wheel on the left hand side allowed it to be used as a stationary engine, driving a wide range of agricultural machinery. The large water tank positioned next to the operator's position is for cooling the engine. The 1903 sale price was £300.

Seven Ivel Agricultural Motors are known to exist including this example at the Mutare Museum: 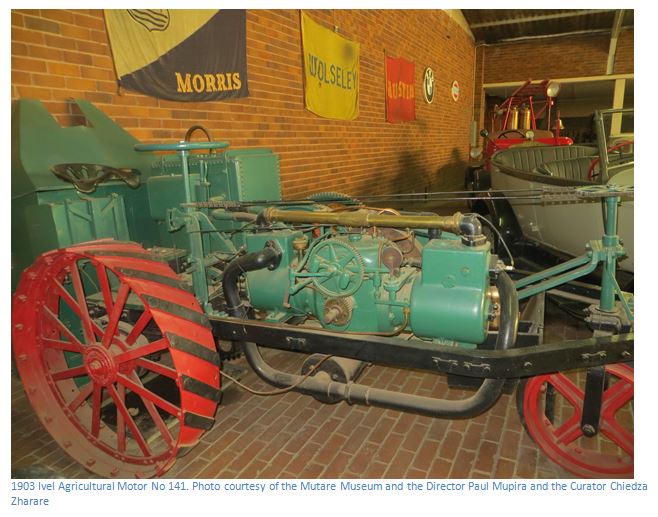 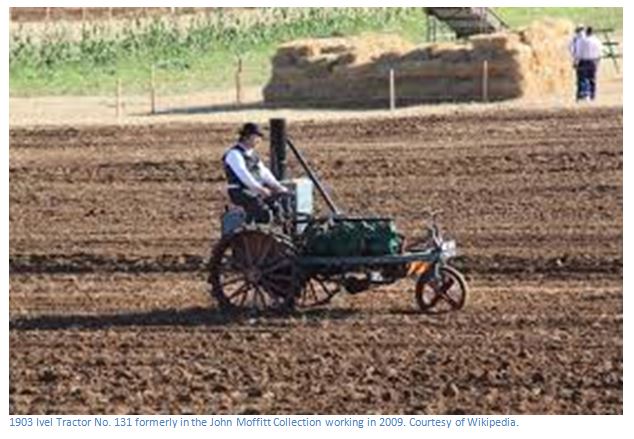 Mutare Museum, Zimbabwe and the Director Paul Mupira and the Curator Chiedza Zharare