These unique panels are just a few kilometres apart on a ridge of granite outcrop which crosses Glen Norah. Both panels are extremely enigmatic and hard to decipher and many different interpretations have been made over the years about them.

They demonstrate that the San hunter-gatherer artists were capable of portraying in paint extremely complex scenes involving matters of spiritual significance to them.

(i)                  The “Bridge paintings” at Glen Norah East (National Monument No. 142) take the Beatrice / Masvingo Road (A4) Turn right at the roundabout onto High Glen Road. Distances are from the roundabout. 1.6 KM turn right at the administrative offices / clinic. 1.8 KM turn right onto a gravel road just before the clinic, 2.3 KM turn left, 2.4 KM stop just before the house on the left. There is a small rocky granite outcrop left of the road, the frieze is on the east side on a ledge about three metres above ground level. If you ask permission, the owner of the house seems happy to allow you to park in the driveway of the house. The driveway entrance has “Rockdene” on the left and “F. Dowell” on the right side.

(ii)                The “Crocodile Men” paintings at Glen Norah West National Monument No. 141) take the Beatrice / Masvingo Road (A4) Turn right at the roundabout onto High Glen Road. Distances are from the roundabout. 1.0 KM turn left onto Chambati Road, 1.6 KM turn right onto Mushayabande Road, 2.3 KM turn left into Zvimba Street. Shortly after passing Zvimba Bar and Beer Garden, turn left into the driveway of City of Harare Department of Housing and Community Services. Keep left and take a gravel road 250 metres south to the western end of the granite boulders. The frieze is at ground level within an open area used by the Apostolic Church; go past some large fig trees to the southwest corner of the boulders.

Elizabeth Goodall calls this frieze “people in comical attitudes crossing a river by rope-bridges,” and describes it as a unique motif listing it under the heading humorous scenes. The stippling she interprets as a river with a snake with ears rising in the top right of the frieze. The frieze is set 3 metres above the ground and a ladder is essential to get up to the frieze. In the past the City Council erected a fence to protect the panel, but this duty has been taken over by a particularly vicious thorn tree which defies any entry up the easy route.

There are two distinct groups of figures within two horizontal lines with vertical lines at the end of each group. The figures are all crawling on their knees, the group on the left comprises thirteen figures;  at least two of the figures have lines rising vertically from their backs. The group on the right comprises nine figures, many with curved and elongated torsos. Two larger well-defined figures sit to the right of the scene with above them an even larger figure, the snakes’ head nearly touching the torso; both scenes are covered in stippling. There are several elephants superimposed on the frieze, two sable antelope above, a kudu cow on the right and a finely drawn warthog bottom left. At the bottom of the frieze are many tiny figures, probably drawn by different hands. Amongst them are some trees, their leaves changing into the streams of stippling. 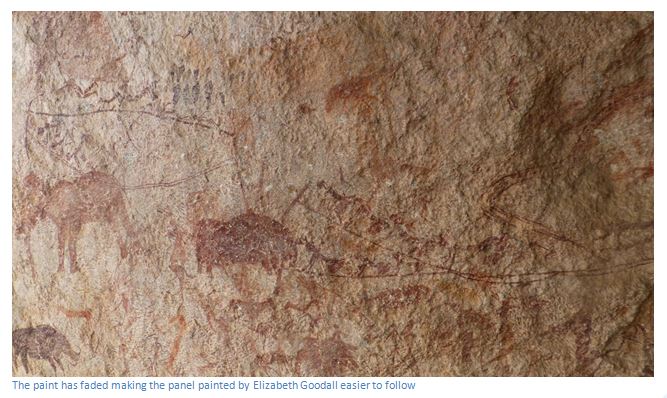 I believe they paint a journey, but probably a journey from this world into the San spiritual world…a journey that was achieved through the process of trance. Human shapes that seem to be attached to the potency of lines, or within a grid of stippling, are not uncommon in San Art. Sometimes they seem to rise from all fours to a more erect posture as they progress along the line as though gathering strength. The lines almost always emanate from trancers who in this scene probably are represented by the larger figures on the right. 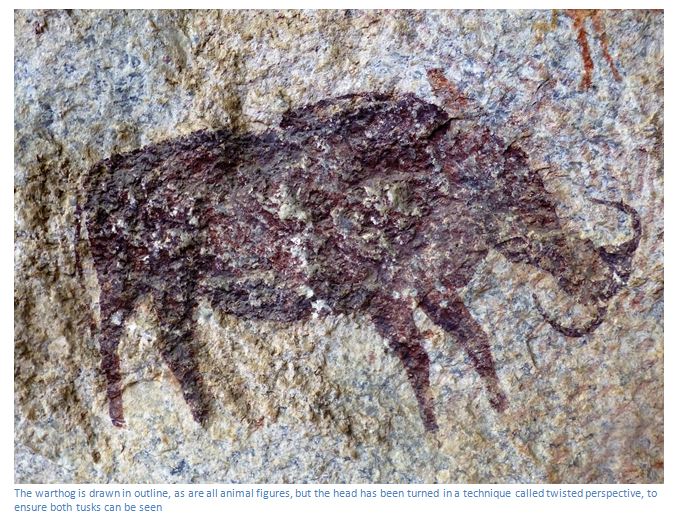 In a crevice to the right is another scene apparently of some figures fighting; one has a raised stick, one is squatting and one lies outstretched. In addition, some antelope and further trees, but the thorn tree has overgrown the entrance, which makes it impassable.

As the visitor faces the frieze there are two panels on the same boulder, one on the left and the other on the right within a metre of each other. 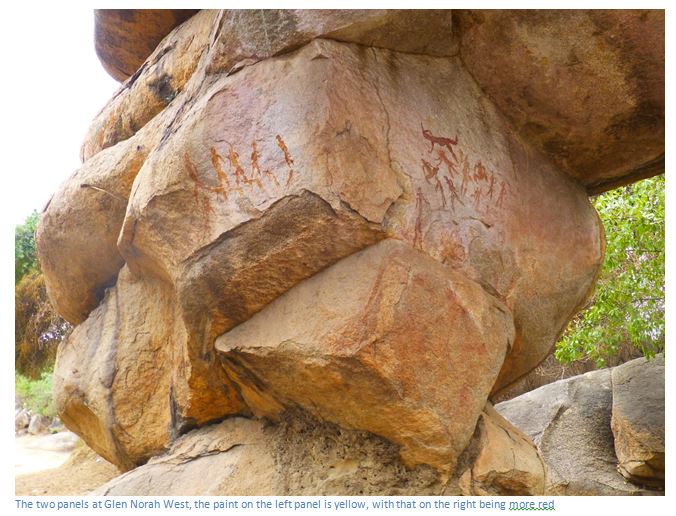 The left panel features what Elizabeth Goodall calls “crocodile men” being greeted by humans. The five figures have gaping mouths that open upwards; four have thin teeth and two have vertical hair. Their legs are pinched at the knee and ankle in conventional San fashion, but they do not have feet. They all have small tulip penises, most facing the wrong way! Perhaps they are tails! Two hold rattles. Four men crouch below them. All are painted in the same yellow ochre paint shade and seem to be part of a single scene. 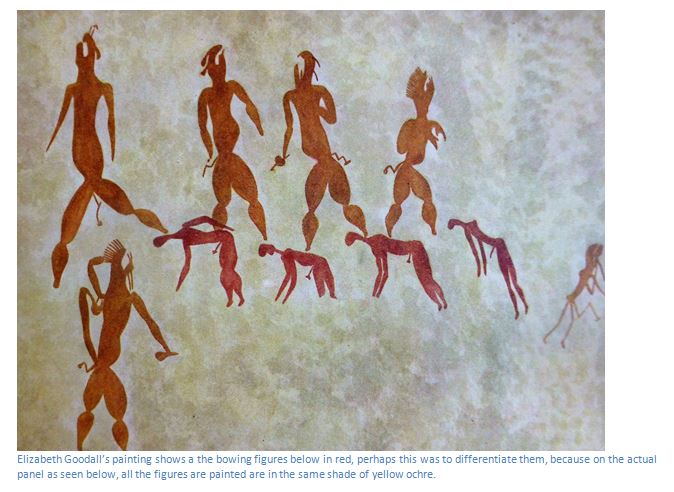 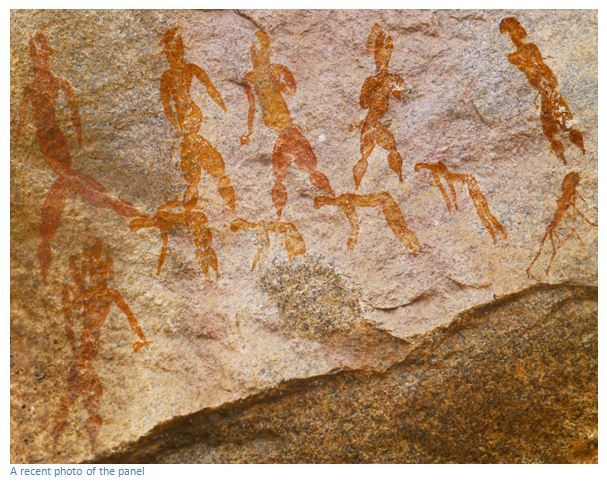 The right panel Elizabeth Goodall calls “Crocodile men,” anthropomorphous figures (i.e.  ascribing human form, or attributes to a being that is not human) displaying reptile characteristics. Both the subject matter and style of these nine figures is much the same as the northern panel as all have gaping mouths and some have the same vertical hair. Goodall thought one was a man-devouring monster and all had some connection with crocodiles. This may be because two of the squatting figures are outlined in a similar way to the crocodile frieze at Lake Chivero, but I this maybe coincidental.

Tom Huffman believed these postures were all metaphors for trance, but as Goodall says, these scenes are unique, yet the trance theme is prevalent throughout Zimbabwean rock art.

Both panels show these fearsome creatures with gaping mouths, no neck, fangs, and no feet. The figure on all fours also has horns and a tail and is covered in fur, while the creature to the right holds aloft a small antelope with another in the other hand. The far right figure maybe holding a bird. 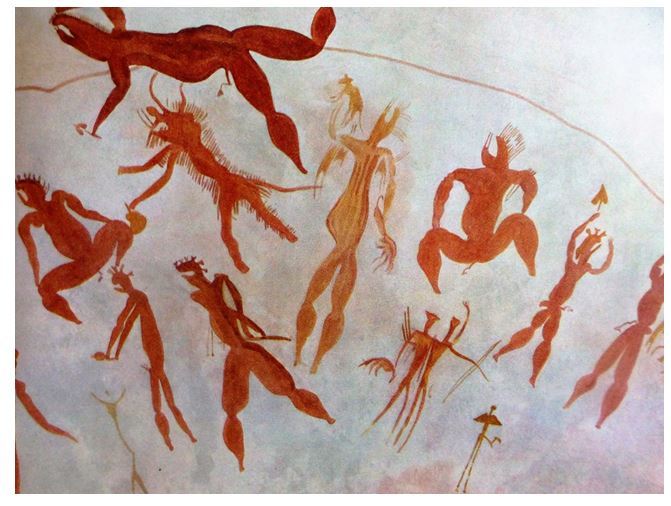 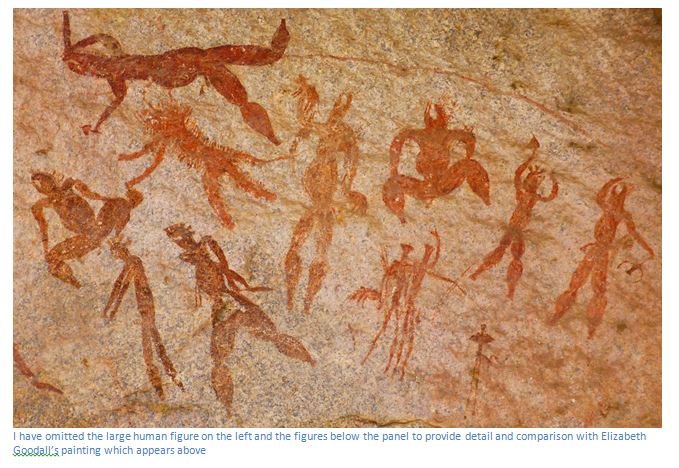 This scene was probably intended by the trancer-artist to portray to a San community audience the sometimes frightening and terrifying ordeal that was part of the journey into the spirit world. The San believe strongly and vividly in the existence of spirits of the dead…they fear them, pray to them to invoke their mercy or sympathy, exhort them in anger.

It might have been intended to prepare would-be trancers for the nightmare that could be encountered and the shock of having to plead for help from spirits that appeared in non-human form. In the spirit world the Gauwasi, their now dead relatives, have been transformed, or half-transformed from humans and now have animal attributes and represent spirits of the dead with just the remote remainders of their human bodies.  For more information on therianthropes; half human creatures with animal attributes see the article on Chiremba / Epworth balancing rocks.

When to visit:
All year around
Fee:
None
Category:
Rock Art
Province:
Harare