Home > Harare > The Pioneer Column’s march from Macloutsie to Mashonaland

The Pioneer Column’s march from Macloutsie to Mashonaland

This article is intended to provide an overview of the route and the men who made the journey in July to September 1890. The build-up to the event and actual journey will be covered in other articles and this article supplies some of the detail.

The Pioneer Column was made up of two distinct units which were both financed by the British South Africa Company:

There is a surprising number of differences in the various lists of members of the Pioneer Corps and the separate force of the British South Africa Company’s Police (BSACP) that accompanied them in the form of spelling differences and omissions. The lists are contained in the British South Africa Company’s pay sheets, the medal rolls, the schedule to the Act that set up the Frederick Clayton Trust and the Pioneer Corps list put together in 1944 by Miss Gordon-Cummings of the Southern Rhodesian Archives.

For the Pioneer Column details I have largely relied upon Robert Cary’s The Pioneer Corps although other sources have been cross-checked against the names he lists.

For the BSACP the paperwork seems to have been carried out in Cape Town and was extremely thorough up to July 1890 when the various Troops left Camp Macloutsie but deteriorated thereafter. Colonel A.S. Hickman in compiling the BSACP lists in his book Men who made Rhodesia used the deferred pay lists which begin to appear muddled from July. For example, No. 341 was Trooper A.W. King attested on 22/07/1890 in E Troop; No. 342 was Trooper W.J. Moody attested on 21/05/1890, Troop not stated; No. 343 was John Carden (later Colonel, D.S.O.) attested on 13/07/1890, Troop not stated. However, Colonel Hickman persevered and his book has proved to be a seminal work although there are some inaccuracies.

The sections of map below on which the Pioneer Column is traced are from a Map of Matabeland, the territory of the Matabili people, with part of southern Mashonaland that was lithographed by Van de Sandt de Villiers & Co., Limited in 1896 and downloaded from a digital collection of African Maps at the Stanford University Libraries.

It is easier to follow the route going from south to north and makes more sense and I suggest readers wishing to trace the route start with map 1 to map 9. 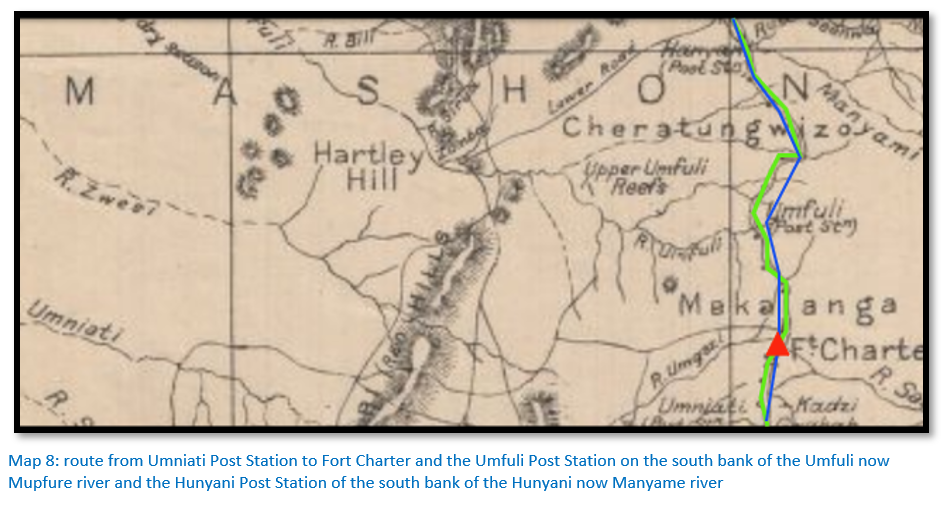 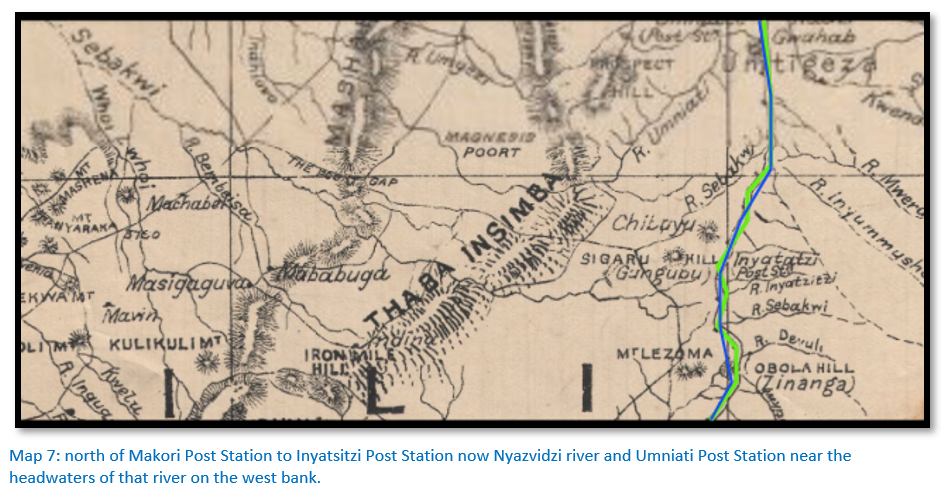 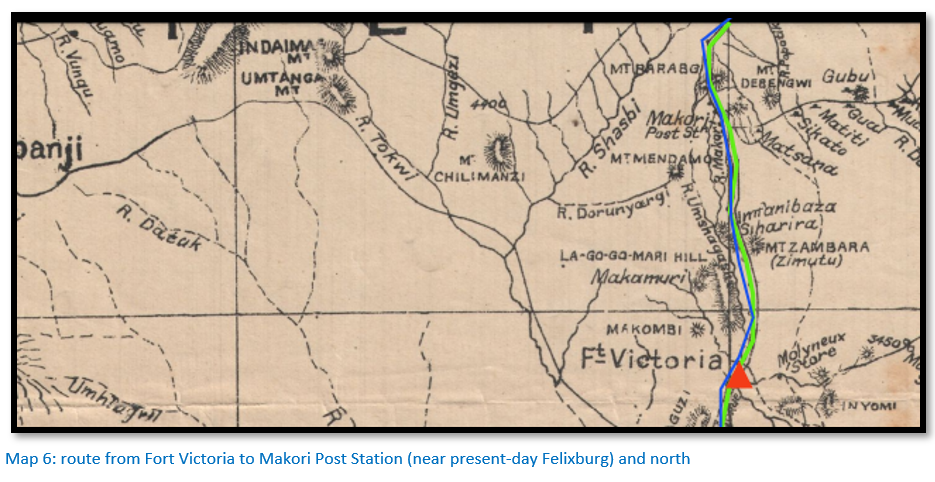 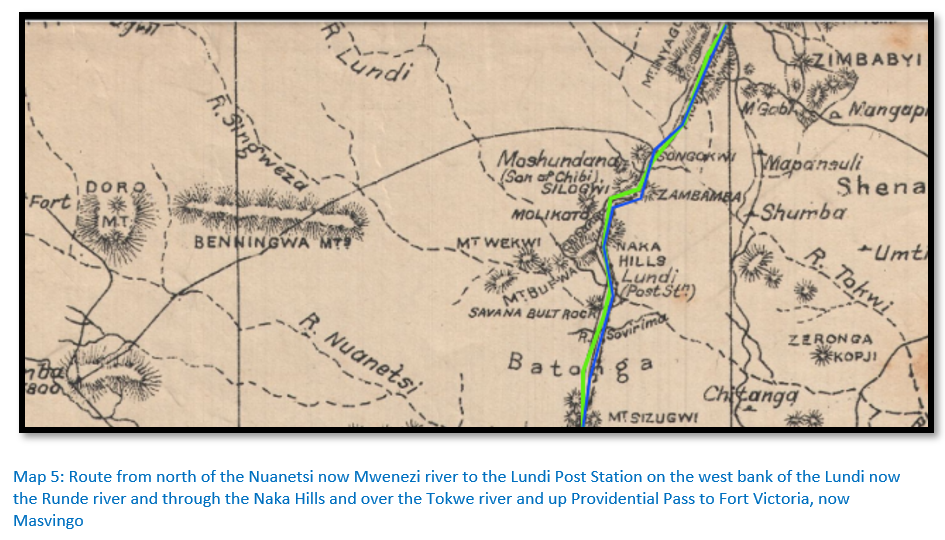 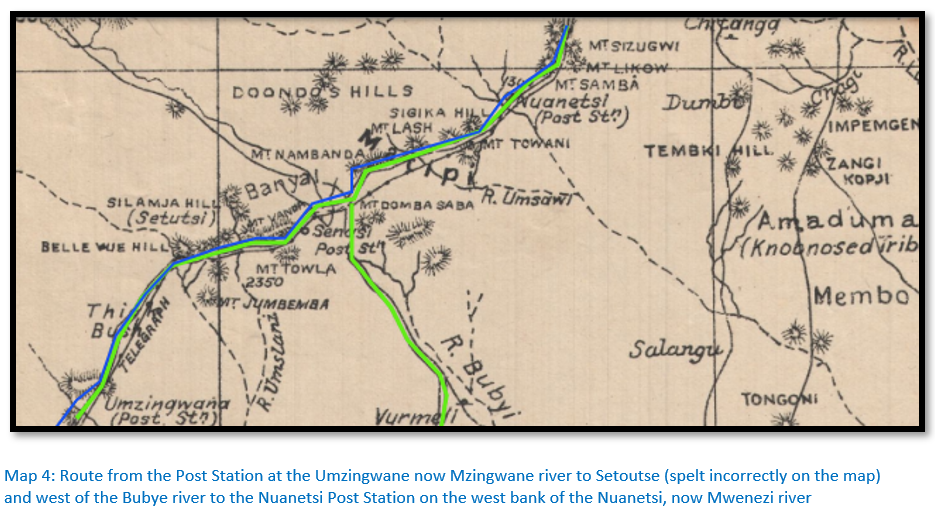 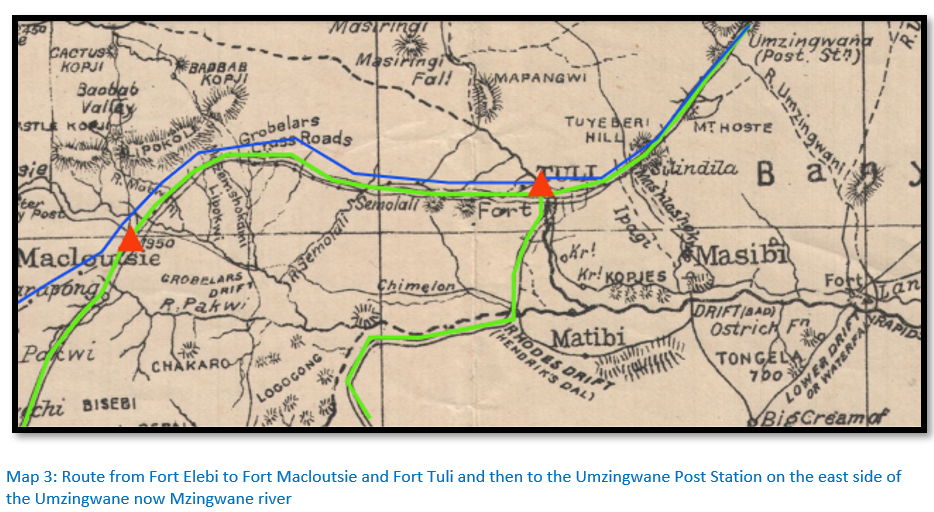 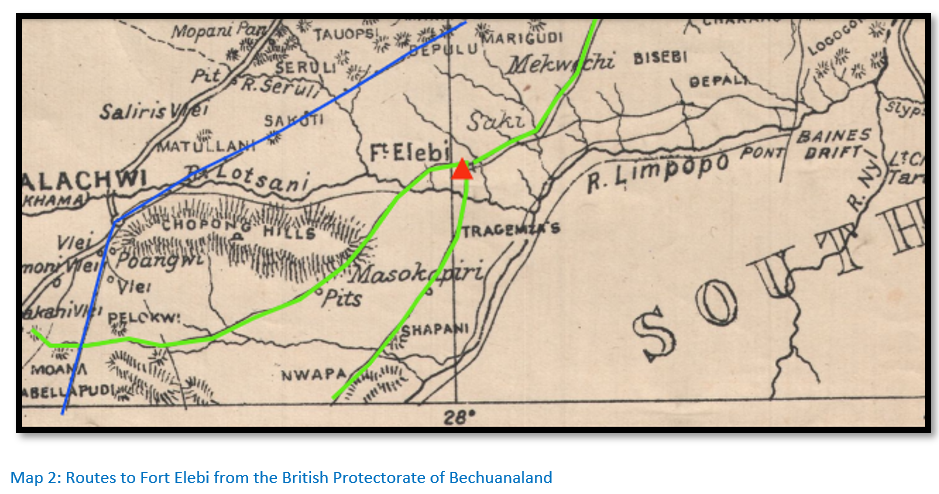 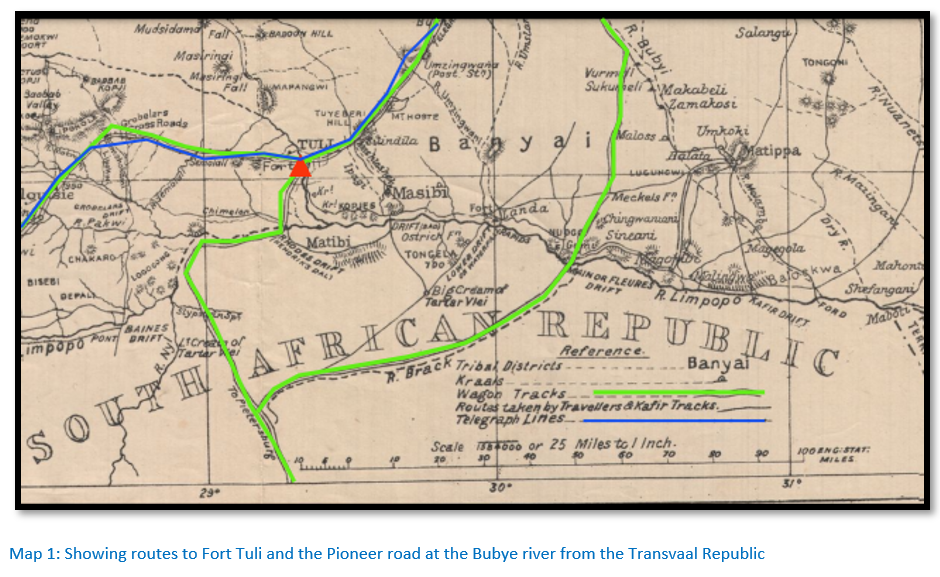 The Column was surrounded by advance guards, rear guards and flanking patrols with picquets out each night and for the Fort Tuli to Fort Victoria section there were also early morning patrols. Generally the column marched from 3am to 6am when they would arrive at the spot the advance guard had spent the night. The oxen would then graze and the men rest during the heat of the day and the march would then be resumed from 5:30pm to 9pm. This routine kept the oxen in condition and they covered about ten miles (16 kms) per day. However the routine varied when river crossings were reached and if some of the oxen were out of condition their wagons would be left behind with orders to catch up as soon as they could.

After Fort Victoria the column comprised “A” “B” “C” and Transport Troops of the Pioneer Corps and accompanying civilians, the BSACP “A” and “B” Troops and headquarters staff and between 90 to 100 wagons each pulled by sixteen oxen with a driver, voorlooper or leader and a general servant to apply the brakes on the rear of the wagon when needed and to forage for water and firewood.[i]

Brief Diary of the march of the Pioneer Column

Officers, NCO’s and Troopers of the Pioneers Corps

The detailed list of names is sourced from Robert Cary’s book The Pioneer Corps published in 1975 by Galaxie Press that has been cross-checked with the album of photographs taken on the Pioneer Column of 1890 by William Ellerton Fry and published as the Occupation of Mashonaland by Books of Zimbabwe in 1982.

Officers and NCO’s are listed by rank and the Troopers are listed alphabetically by Troop. This method might be easier for descendants who will know their relatives’ name but probably not their nominal roll number.

Also listed in alphabetical order are those civilians who accompanied the Pioneer Column as prospectors of the Bechuanaland Exploration Company and Goldfields, but also Dr Jameson as Rhodes’ personal representative and Colquhoun, the Administrator designate of Mashonaland.

The list drawn up by Cary also includes separate lists for the “doubtfuls” who claimed to be members of the Pioneer Corps but for whom there is little evidence from the records. Also those “discharged” before the main body crossed the Shashe river between 10 – 11 July 1890.

Peter Mclaughlin’s excellent introduction to Ellerton Fry’s album states that Johnson and his colleagues at various locations screened thousands of applicants from all over southern Africa but had an obvious preference for candidates with a military background.[ix] A complete cross section of people with skills were recruited: “the complete nucleus of a self-contained civil population” as Johnson writes in Great Days including ‘clergymen, doctors, lawyers, prospectors and miners, sailors and tailors, builders and butchers.’[x] 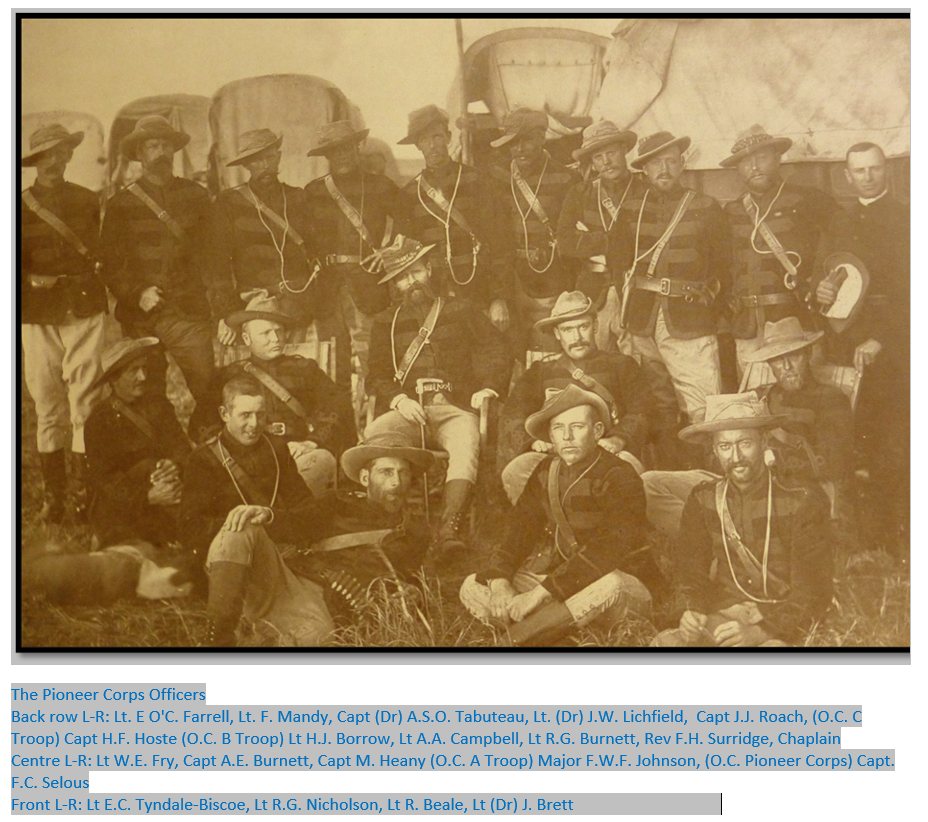 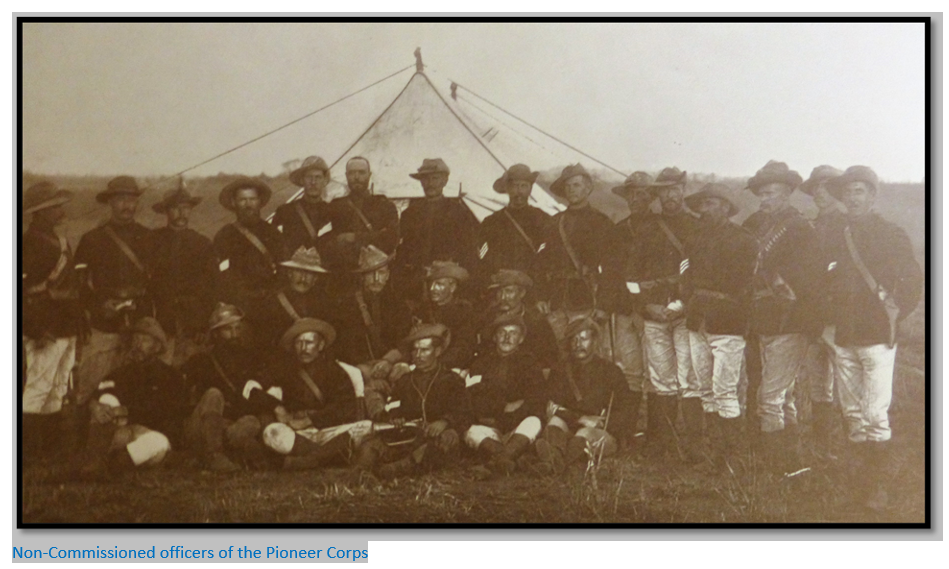 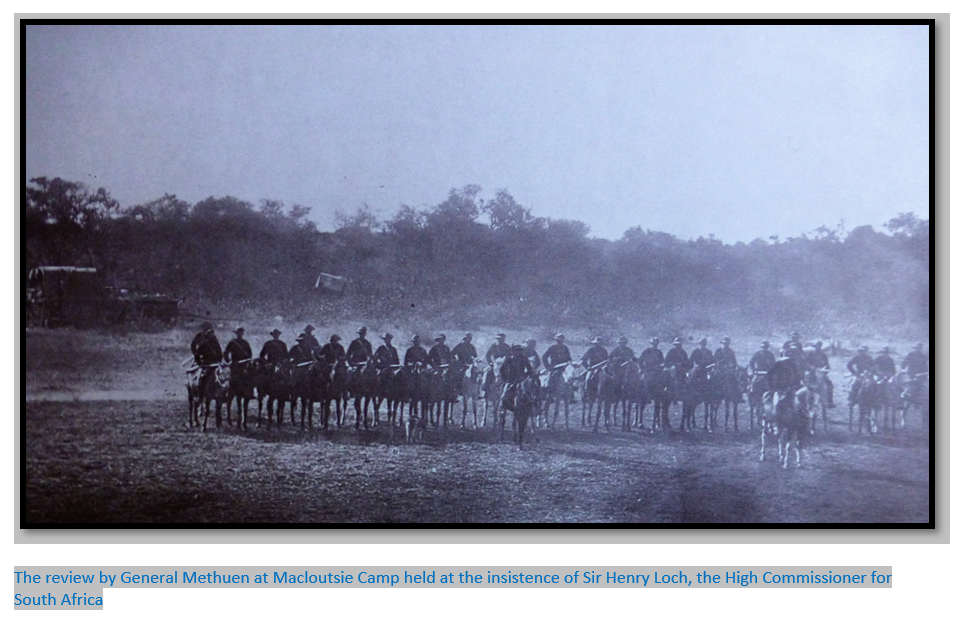 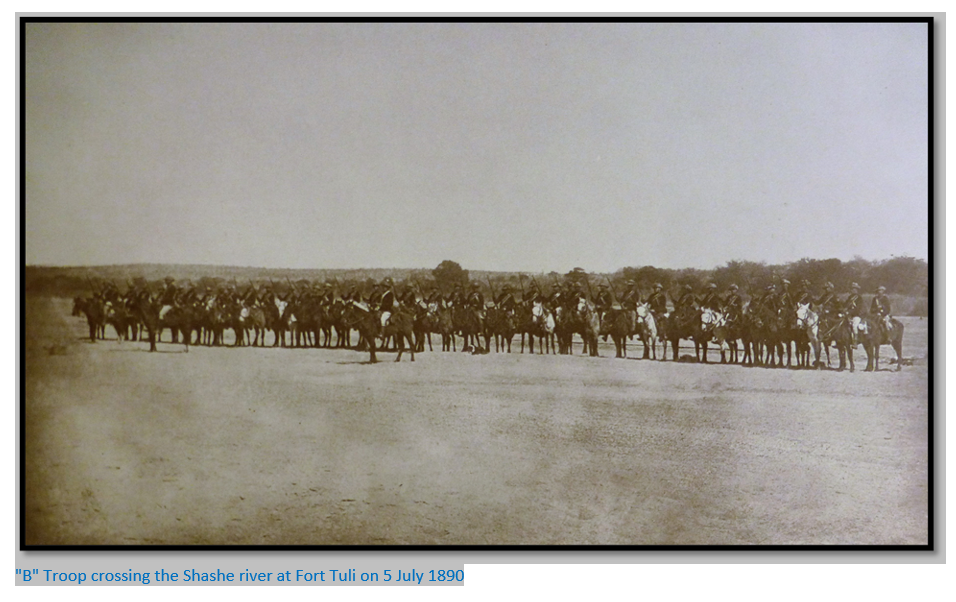 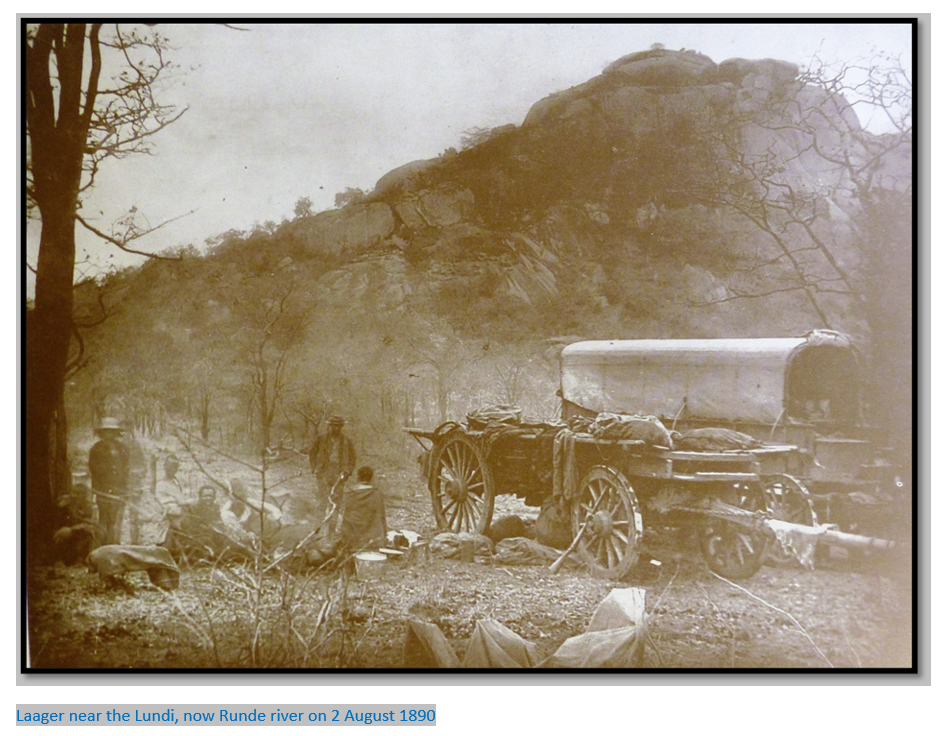 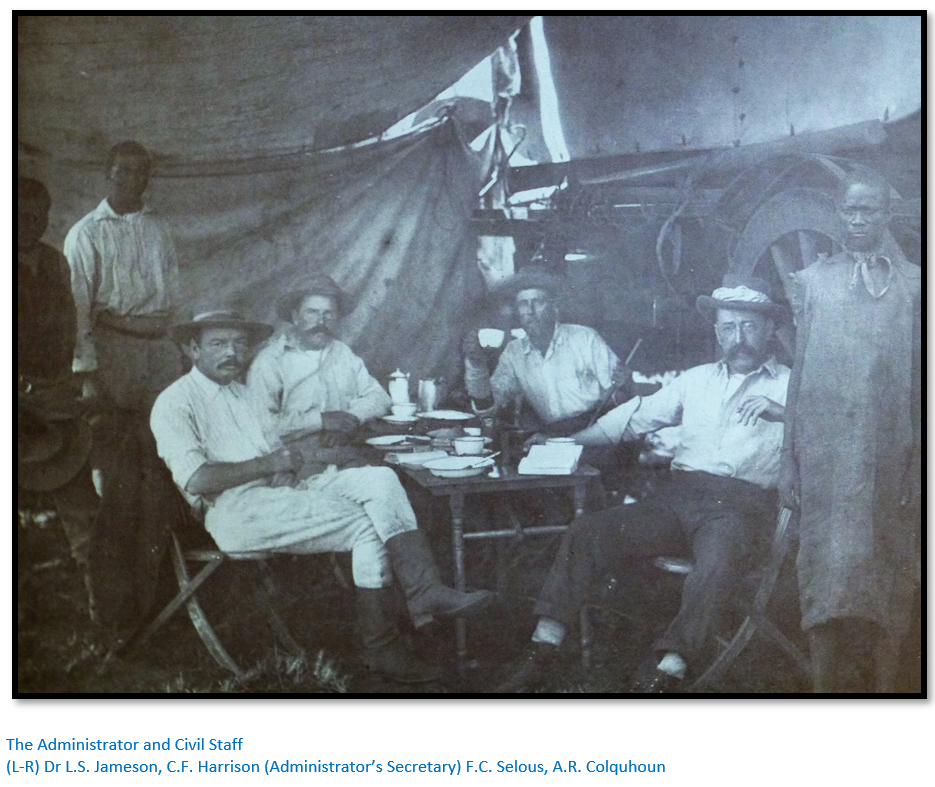 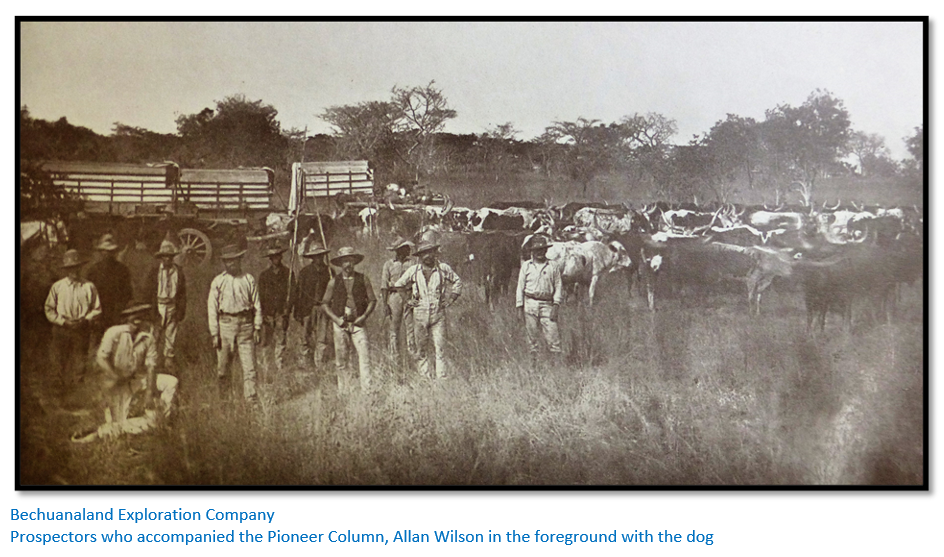 Why was an additional force required in the form of the British South Africa Company’s Police? (BSACP)

The initial plan to invade Mashonaland envisaged using the then known route through Matabeleland “the Hunter’s Road” and using troops of the British Army. Frederick Carrington who commanded the Bechuanaland Border Police from 1888 thought that a minimum force of 2,500 armed men would be required to defeat the amaNdebele and force a safe passage through to Mashonaland.[xi]

However Selous suggested that the Pioneer Corps should skirt amaNdebele territory by starting near the Limpopo / Shashe river confluence and marching through to the highveld and this suggestion was taken up by Rhodes and Johnson. Johnson, who always resented Selous’ influence, conceded that his objective: “obviously, was to complete my contract as quickly as possible, avoiding opposition and fighting like the plague.”

The widespread publicity that was generated by efforts to recruit Pioneer Corps recruits resulted in Sir Henry Loch, the British High Commissioner for South Africa, stating that an additional military force of at least 400 armed and mounted men had to be raised to defend the supply bases at Macloutsie (Pioneer Corps) and Fort Matlaputla (BSACP) and Fort Tuli and ensure that the Pioneer Corps could be rescued if necessary…the memories of the massive humiliation of Isandlwana still hurt.

Thus the BSACP was born with Capt P.W. Forbes being taken on as the first officer on 16 November 1889 and only on 1 March 1890 was Major E.G. Pennefather appointed in overall command of the combined forces and promoted to Lt-Colonel. [See the article on Lieutenant-Colonel Edward Graham Pennefather (1850 – 1928) under Harare on the website www.zimfieldguide.com] and the first recruits were taken on and trained initially at Fort Elebi where the Bechuanaland Border Police was based before moving to Macloutsie.

The concern over the military adequacy of the combined force was the reason that Lord Methuen, the Adjutant General of British Forces I South Africa observed the Pioneer Corps in manoeuvres on 23 – 24 June 1890 before giving his permission for the operation to proceed.

Adrian Darter reported: “Lord Methuen clearly pointed out to us that we were facing many perils and that amidst the hardships of pioneering, whilst cutting a roadway through a strange land, we might be attacked by the Matabele, and that anyone who desired to withdraw from the expedition could do so now by communicating his intention to his commanding officer. We slept over it that night and only three men decided to go back.”

The BSACP base camp was at Fort Matlaputla at Macloutsie.

“A” Troop then gets left at Fort Charter and “B” Troop (the senior Troop) continues with the headquarters staff to Fort Salisbury.

This information is sourced from Colonel A. S. Hickman’s seminal work Men who made Rhodesia published in 1960 and cross-checked with the schedules attached to the 1918 Statue concerning the  Frederick Clayton trust. [For details see the note below] Any names in the nominal roll that are not included in the Frederick Clayton schedules are marked in Italics.

Officers are listed by rank and NCO’s and Troopers are listed alphabetically. Again this method might be easier for descendants who will know their relatives’ name but probably not their nominal roll number. 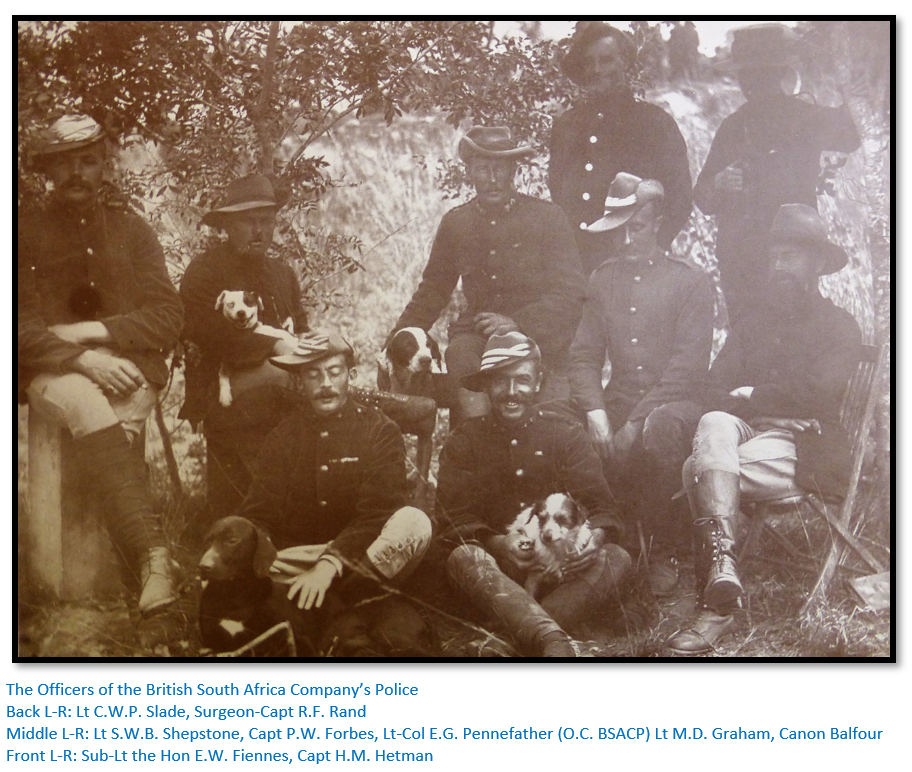 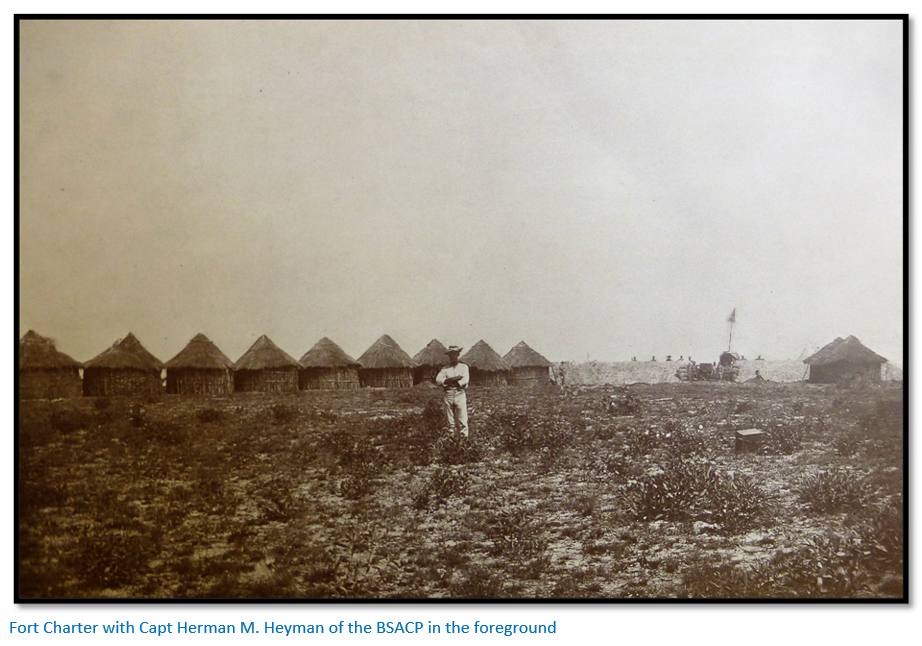 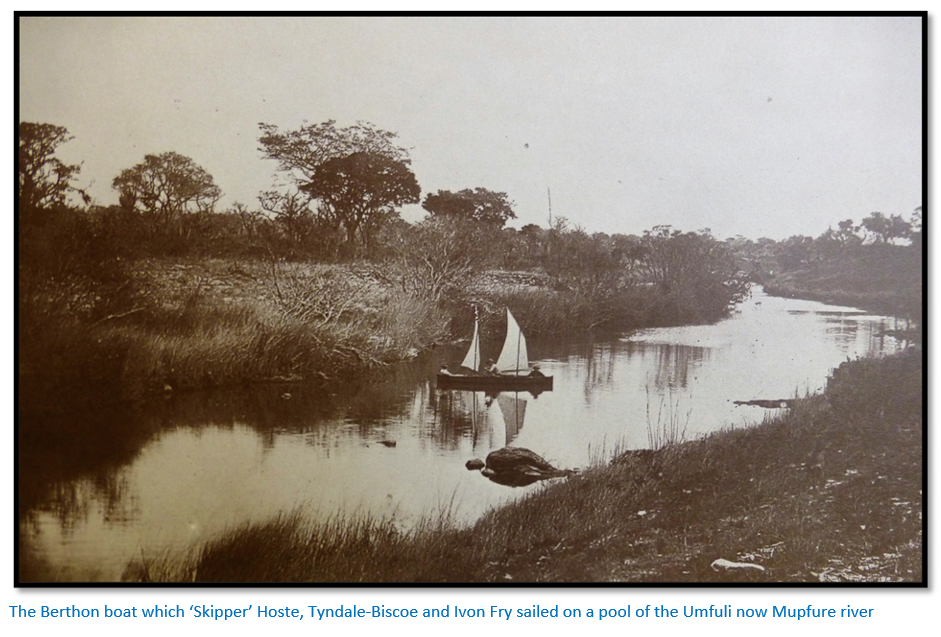 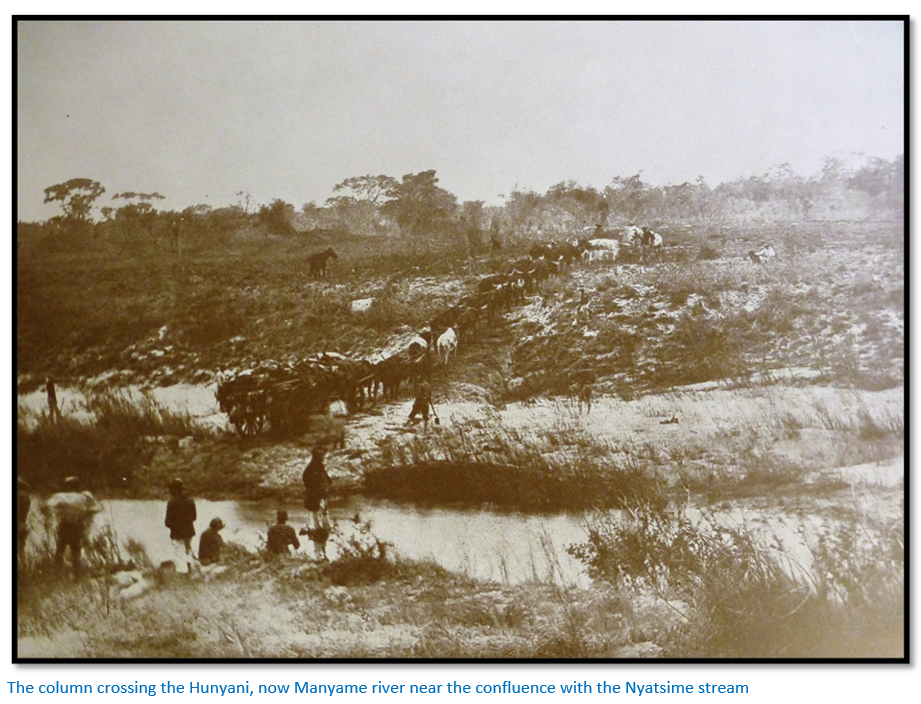 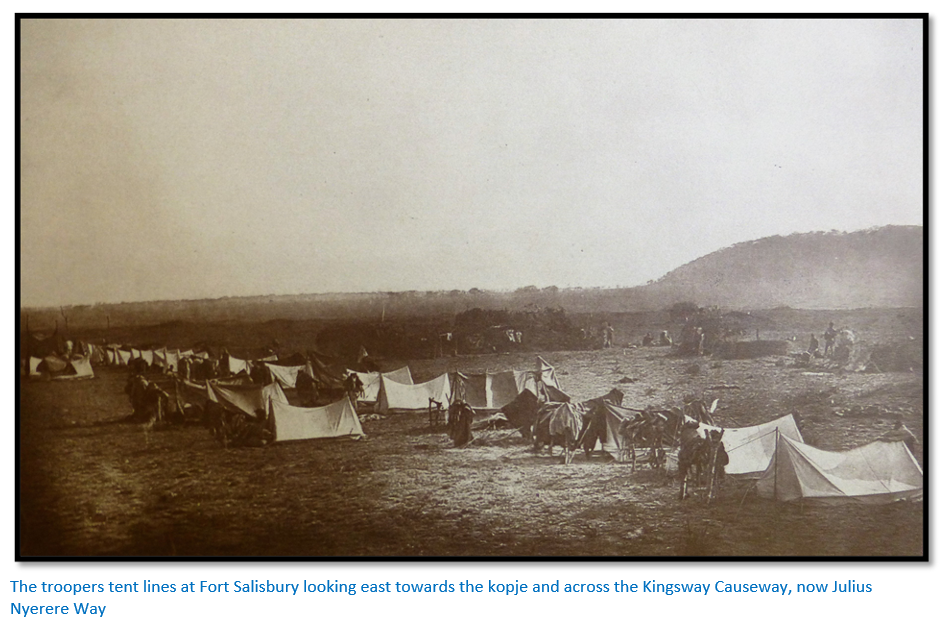 How many travelled the whole way to Fort Salisbury and what was the entire strength of the Pioneer Column?

The above number is from my schedules.

Details on the trek from W. Ellerton Fry's notebook on at the Bulawayo Public Library

The 1906 will of Frederick Clayton

This stated: The Hatcliffe Estate (estimated value £30,000) with all livestock implements etc. I leave to my wife Georgina Clayton for her full use and benefit during her life time, but not to be let or the livestock to be allowed to be less than it is at present the mortgage if any remaining to be paid out of my monies in hand. At the death of my wife the Hatcliffe Estate to be held in perpetuity for the use of Pioneers and descendants of Pioneers (especially those descendants of pioneers who have been disabled during this present war) whom are in need of help.

One of the exercises carried out has been to compare the Pioneer Corps members in the Frederick Clayton Will Trust list with those listed by Peter McLaughlin in Occupation of Mashonaland referred to the table as the Ellerton Fry album. Pioneer Corps Nominal Roll Numbers have been taken from Robert Cary’s The Pioneer Corps.

E.E. Burke. Fort Victoria to Fort Salisbury. The latter part of the journey of the Pioneer Column in 1890. Rhodesiana Publication No 28, July 1973

A. Darter. The Pioneers of Mashonaland. Books of Rhodesia. Bulawayo 1972

P. McLaughlin. Occupation of Mashonaland; Views by W. Ellerton Fry. Books of Zimbabwe, Bulawayo 1982. All the photographs used in the article are from this book

Ordinance No. 10/1918 of the Southern Rhodesian Statutes, The Frederick Clayton Trust

[iv] EE. Burke, P2. The original plan had been to build a fort to the north east near Mount Wedza to act as a block on the Portuguese, but the BSACP oxen were in such poor condition the column stayed on the watershed. Fort Charter was abandoned as a Police Post in August 1891, but continued as a post station

[v] Ibid, P2. The tracks from Selous' six wagons on his 1887 hunting expedition from Mount Hampden to the Ngezi river headwaters were still visible in the sandy soils at Charter when the column passed

[vi] Ibid, P8. The oxen were now so weak they had to be helped across the river. The 'Berthon' boat was tried out here on one of the long pools of the Umfuli river.