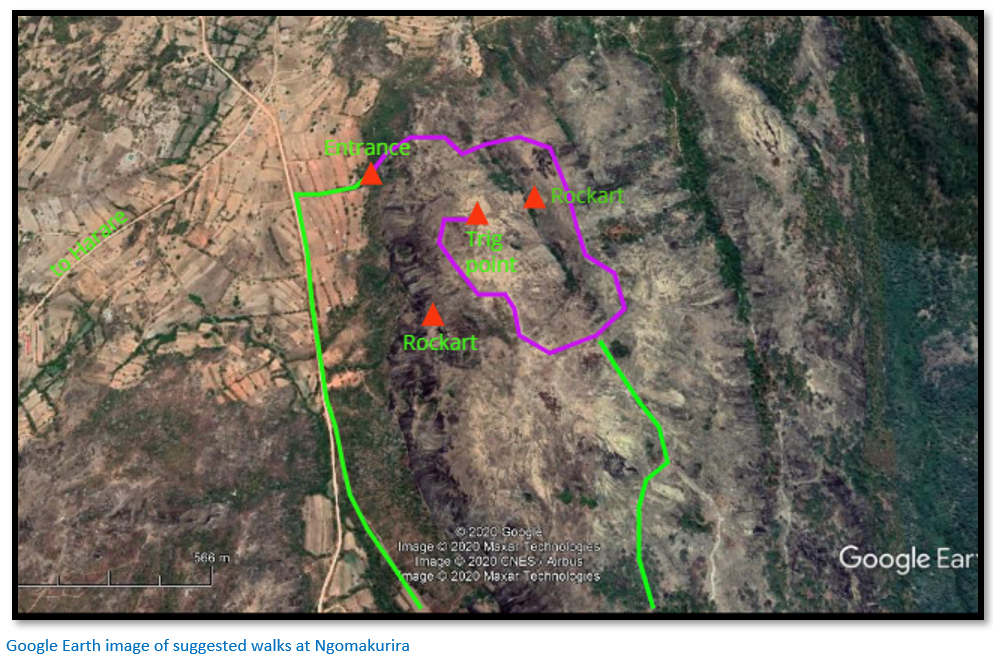 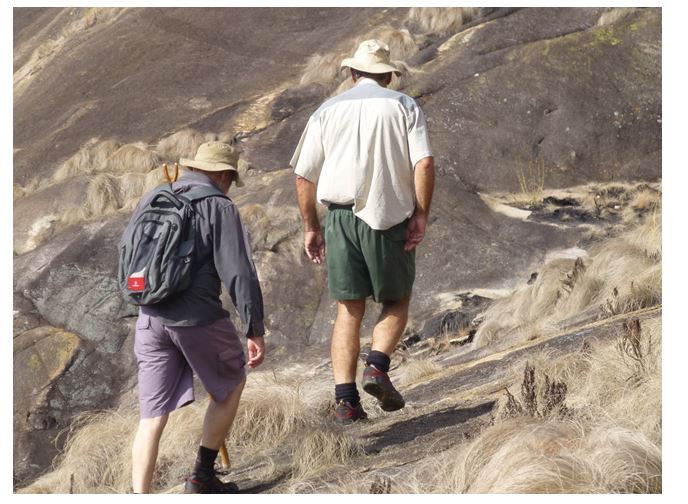 The stiff hike up the adjoining mountain, which is much more arduous than Domboshawa, is well marked with paint arrows, goes across extensive sheets of granite rock covered in colourful carpets of lichen, through beautiful forests of Miombo woodland, and directly opposite the main mountain, a wonderful echo effect can be heard by shouting across the space. Perhaps this natural phenomenon resulted in its name, which means “drums sounding” in Shona. 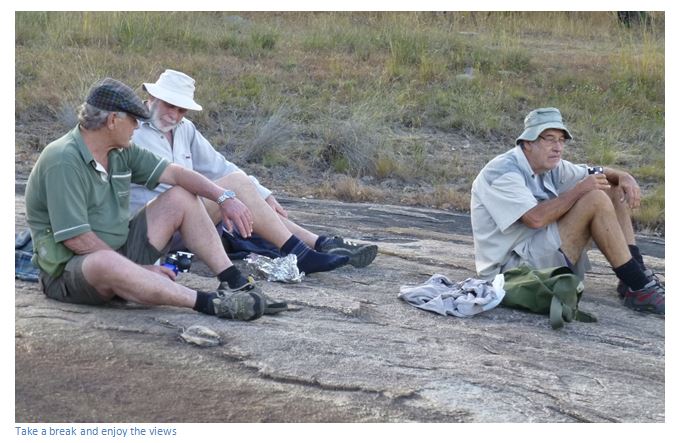 Baboons and vervet monkeys are often encountered and there is a great abundance of bird life, including birds of prey, which nest in the vertical ledges and use the strong up-draughts to soar amongst the peaks in their search for quarry.  There is a real reward for those who walk to the top of Ngomakurira with magnificent 360⁰ views and the strong cooling breezes. 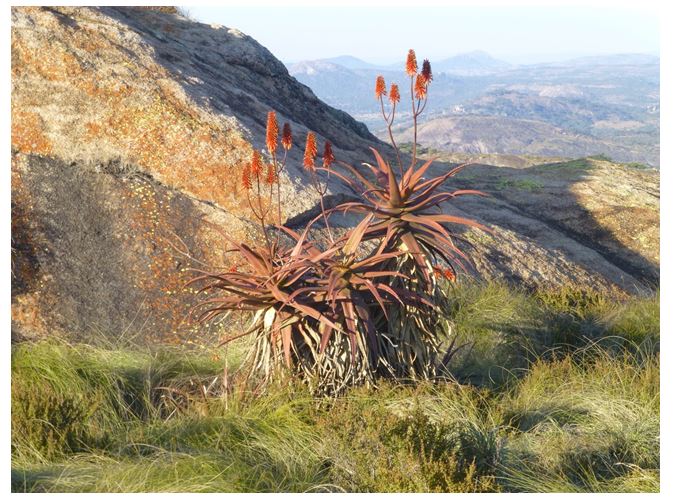 To view the San rock art paintings of the large elephants, follow the path to the trig beacon, but walk over in a westerly direction and down the granite face, instead of turning right for the summit and follow the painted arrows. A short scramble downwards leads to a treed-hollow set in the mountainside and within a vaulted shelter where these paintings can be viewed.

Sadly, vandals have comprehensively wrecked this frieze; most probably by schoolchildren writing their names using charcoal, but the “Mount Zion” indicates that Apostolic Church members may also have been responsible for the damage. Much of the graffiti is 3-4 metres high; indicating some sort of scaffolding was constructed from tree branches.

This kind of graffiti and smoke damage from the fires of Apostolic Church members who camp out overnight is becoming much more prevalent, as is evidence of their overnight vigils in the form of baby diapers, plastic containers, and mess everywhere they go

The first photo below was taken in March 2013, the second from an article in the Harare News by Stephen Tsoroti showing the graffiti in early 2016. 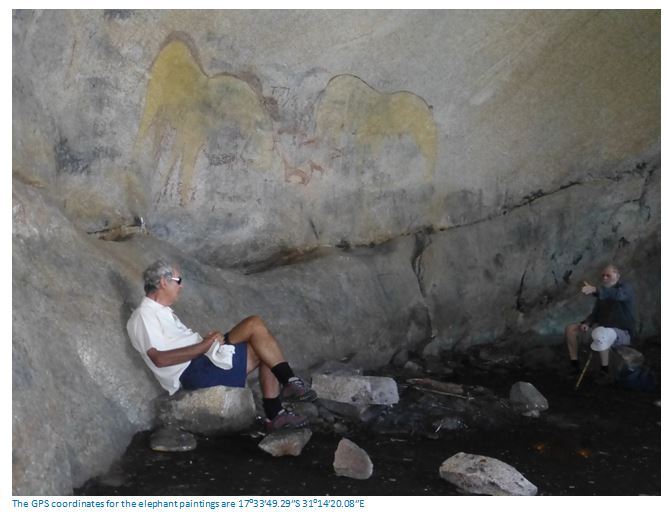 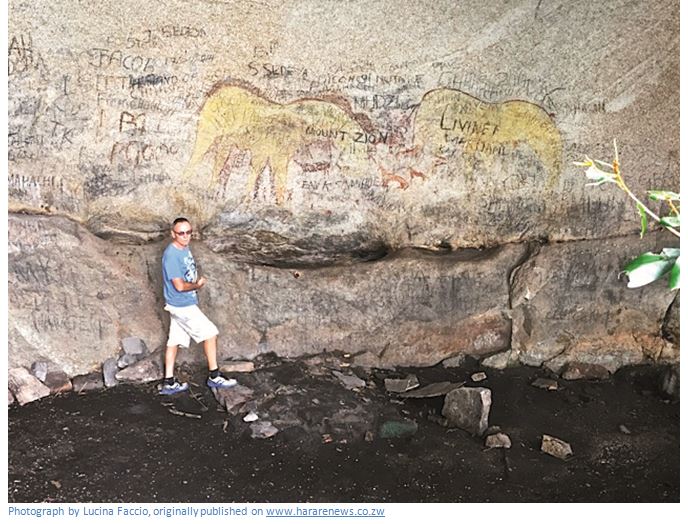 The Ngomakurira site is managed by the National Museums and Monuments of Zimbabwe, who with the Zimbabwe Republic Police are based at the entrance to the site. They will need to be a lot more active than they are at present and physically patrol the area if they are to prevent the actual damage that is being caused to national treasures in the past few decades. Makumbe Cave (see the separate article) just a few kilometres away and considered by Elizabeth Goodall and Peter Garlake to be the finest rock art site in the country has been totally destroyed by the smoky fires of members of the Apostolic Church sect within the last decade.

Additionally, there are concerns at the illegal tree-cutting free for all, which has already created a “highway” to the rear of the site where cut logs are dragged from the site and secondly, the practice of driving up the massif and "kissing the beacon" which is causing damage to the ground surfaces; both activities will result in accelerated soil erosion. The Authorities should curb both these practices, before this permissive culture results in environmental damage that cannot be undone. 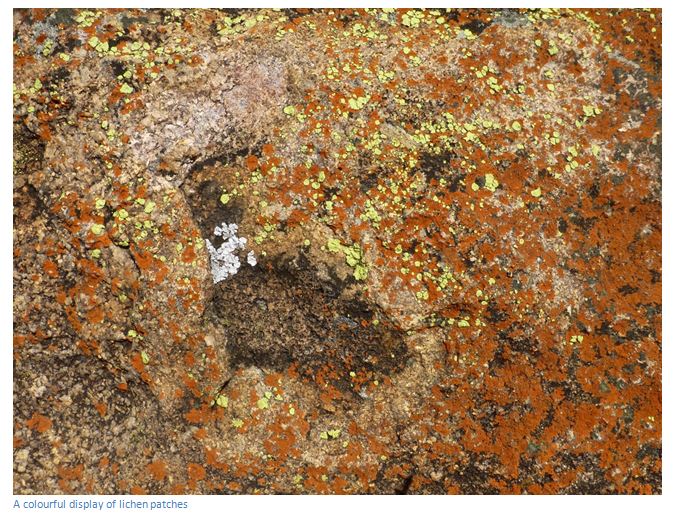 Most of the rock art paintings are not in a cave, but at the foot of the high orange coloured vertical granite face and they have all faded badly as they are fully exposed to the weather. Although they not in good condition, the remarkable open-air setting at Ngomakurira gives visitors a powerful sense of historical perspective. The outlines of four large elephant dominate the main frieze with many humans and animals superimposed onto the elephants. There is a faded camp scene close by which features a number of couples with their shoulder bags and weapons laid out on the ground. A very large obese figure holds rattles in his arms, different parts of the frieze feature an aardvark and hare; both are shown below amidst numerous antelope, zebra, and human figures. 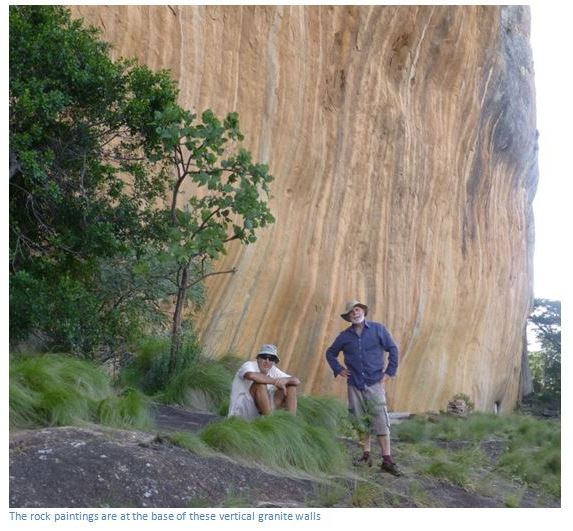 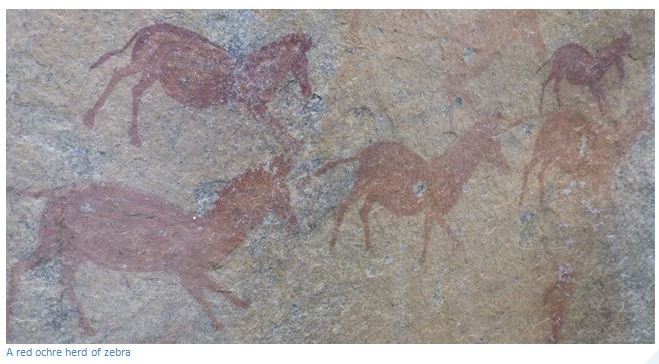 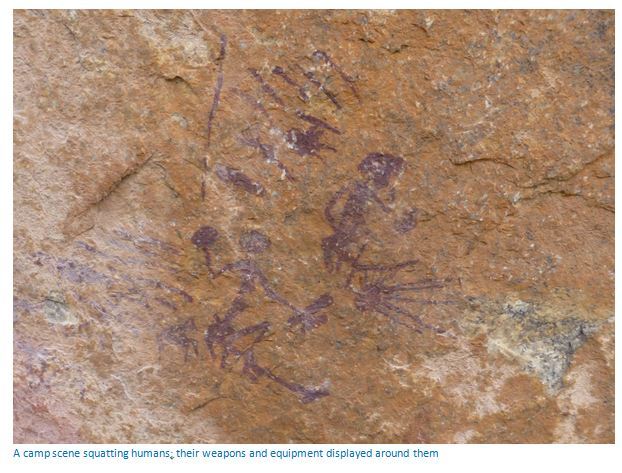 A crowded scene with kudu and sable antelope, women squatting, hunters with weapons, a figure in trance on all fours bleeding from the nose and the attenuated limbs of a figure from the spirit world and part the outline of a large elephant 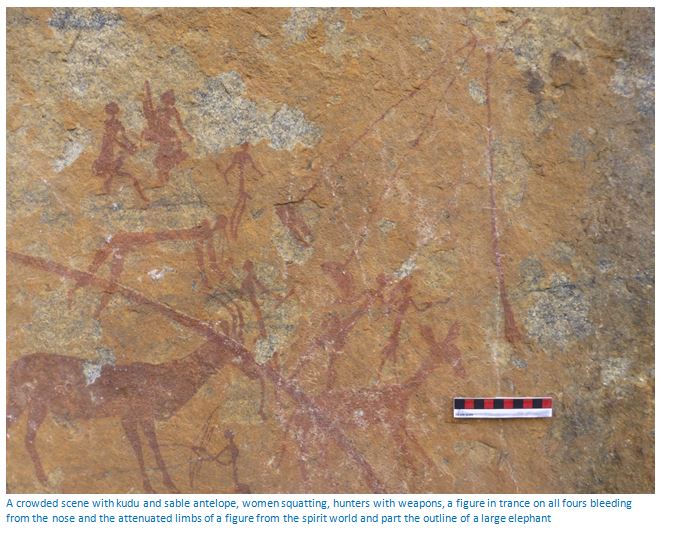 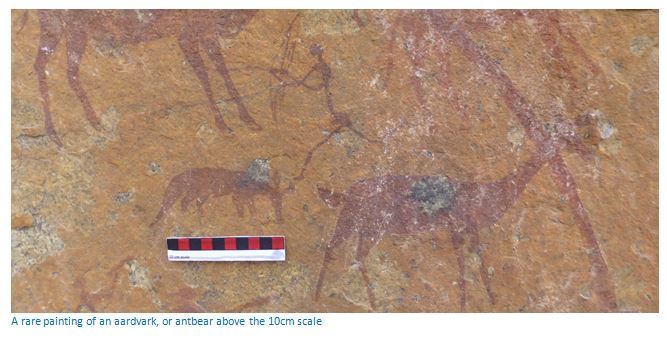 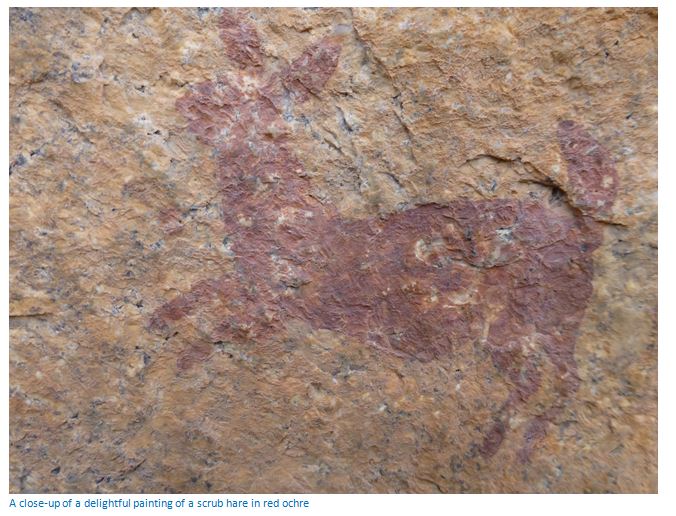 Visitors wishing to see the Late Stone Age rock art paintings at the base of the mountain should climb up and over the first range of kopjes and follow the arrows keeping to the right of the small stream in the valley. The paintings are at the very base of the prominent vertical cliff-face. 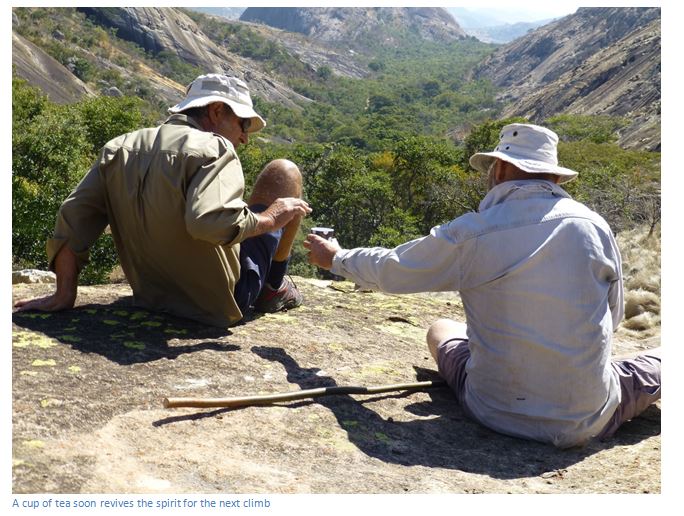 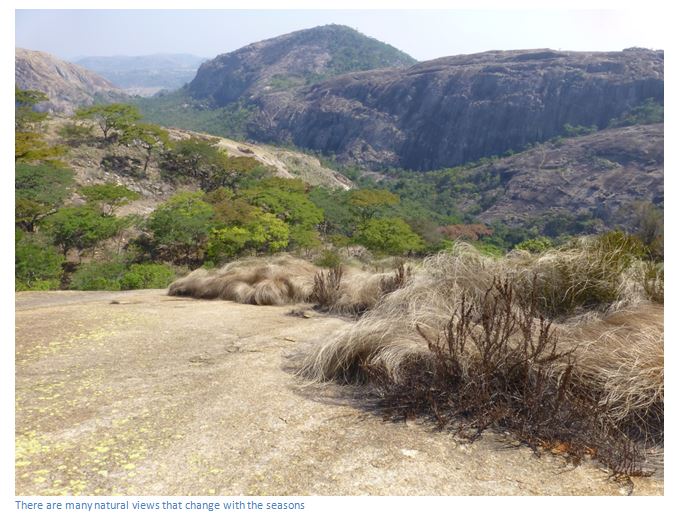 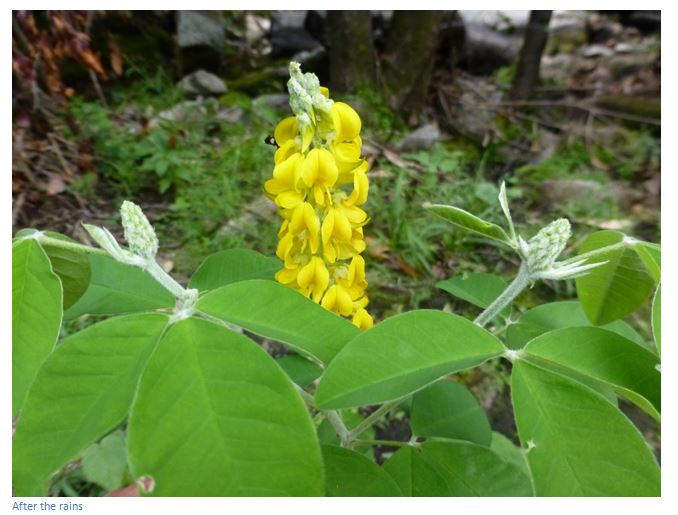 When to visit:
All year around Monday to Sunday 6am to 6pm
Fee:
An entrance fee is chargeable
Category:
Scenic
Geological
Rock Art
Province:
Harare