The Museum’s address is 107 Rotten Row, Harare. From Samora Machel Avenue, drive into the Civic Centre along Pennefather Road, turn left into Willoughby Road and then first left into Burnett Road.

Originally opened in 1903 and called the Queen Victoria Museum, it mainly focuses on archaeology and ethnography.

The opening section explores the role of spirit mediums, particularly their role during the First Chimurenga (1896-7); although only the roles of Nehanda medium, Charwe and Kaguvi are dealt with in any detail and there is no mention of spirit mediums in Matabeland.  The display focuses on the Mazowe valley, possibly because this was Charwe’s stronghold, but it would be more interesting to expand this display to other sacred sites tied to political and historical events and rain-making ceremonies. 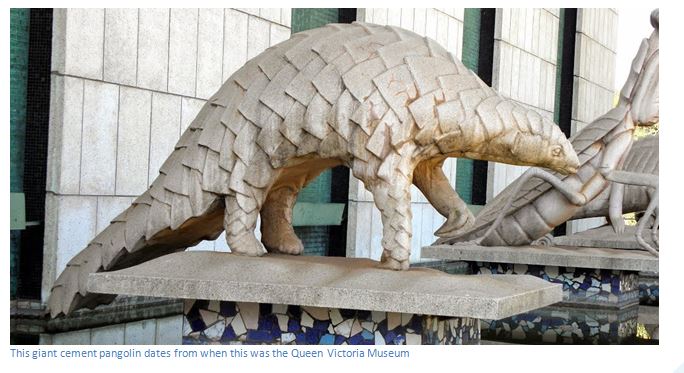 A large area is devoted to human evolution with examples of tool making from the earliest times in the Stone Age with good assemblages of tools; rock art is displayed through the copies of Elizabeth Goodall and three-dimensional life-size models of San hunter-gatherers. The Iron Age is dealt with in some detail showing the progressive development from early agriculture to the development of iron and copper smelting and production of hoes and arrowheads and with increasing wealth the development of external trade with Swahili merchants and the barter of cotton goods and beads for fine gold.

A further section deals with gold-mining showing how shafts and open and underground shafts were dug with the earliest radiocarbon dates in the 1200’s, although mining probably started in the seventh century. The gold trade developed with the arrival of the Portuguese who established trading posts, or feiras around Zimbabwe. A reconstruction of a Shona Iron-Age village displays examples of items from everyday life including musical instruments, basket ware, and weapons. 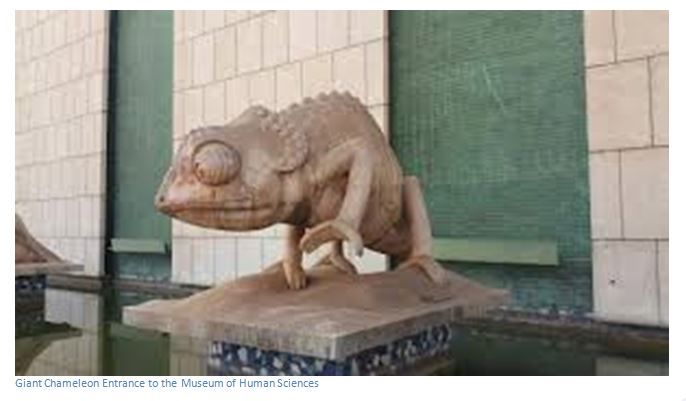 The star attraction of the museum is the seven-hundred-year-old Lemba artefact ngoma lungundu, which some believe to be a replica of the Biblical Ark of the Covenant. It is the oldest wooden object ever found in sub-Saharan Africa. The ngoma lungundu belongs to the Lemba people - black Africans who claim Jewish ancestry.

They say the vessel was built almost 700 years ago from the remains of the original Ark, which the Bible says was used to store Moses' 10 Commandments.

For decades, the ancient vessel was thought to be lost, until it was found in a storeroom in Harare recently.

Tudor Parfitt, who rediscovered the artefact three years ago, believed it was the oldest wooden object ever found in sub-Saharan Africa. "On each corner there are the remnants of a wooden ring, and obviously at one point, it was carried by inserting poles through these two rings on either side," he said. "Of course in the biblical account, that's precisely how the Ark of the Covenant was carried across the wilderness."

It was last photographed in 1949, but during the war of independence, it was hurriedly taken to Harare with other artefacts for their protection. It was forgotten about in the move and the Lemba people thought their sacred relic had been lost.

The museum then becomes a series of dioramas filled with animal displays ranging from fish to birds exploring various themes such as changing bird plumage, varied forms of bird nests, wing shapes in relation to habitat, concealing colours, and patterns in relation to animal camouflage. Some displays, such as the butterflies require some explanation of their purpose, a very large habitat display has a stuffed zebra and lion, and another has a leopard. The simulated natural backgrounds of granite kopjes and trees are well done, but there is no attempt to put them in context, or explain what they demonstrate and the uneven floor and poor lighting make walking rather hazardous for the occasional visitor.

The mezzanine attempts to explain the ages of life as seen through the months of the year…a rather old-fashioned method. The technical descriptions of the geological periods seem competent, but I am not sure what ideas all the young school children who visit take away with them, apart from some confusion. Finally there is a small room devoted to the Olympic movement, but like the Guinea Fowl School display at the Zimbabwe Military Museum at Gweru, its presence is not justified. Overall, it does not really live up to its billing as the National Museum.

When to visit:
All year around Monday to Saturday 9am to 5pm
Fee:
An entrance fee is chargeable
Category:
Cultural
Historic
Province:
Harare