Outside the main entrance to Mukwati Building in Livingstone Avenue, between Simon Muzenda Street (formerly Fourth Street) and Fifth Street.

Ask at the main gate on Fifth Street for permission to visit the Mortuary, a National Monument; one of the attendants may accompany you.

No women were included amongst the Pioneers, but it soon became clear they would be needed for nursing and education. The Superior, Father Alphonsus Daignault,   from the Jesuit Zambezi Mission approached Rhodes suggesting that some of the sisters’ from King William’s town go to Mashonaland to do the nursing and work in the schools and the Jesuits would devote themselves to educational and pastoral work. Rhodes agreed.

In February 1890, they set out on the long and dangerous journey to Mashonaland. They travelled to Grahamstown by post-cart and then by train and Cape cart to Mafeking. They then travelled from the 13th April to 10th May from Mafeking to Macloutsie, some 400 miles, as several of the men there were ill. Mother Patrick records in her diary: An enormous ox-wagon was hired, which was to be our abode for the next five weeks. We viewed this kind of conveyance with mixed feelings and our apprehension grew when we were told it was to be pulled by a span of sixteen oxen. 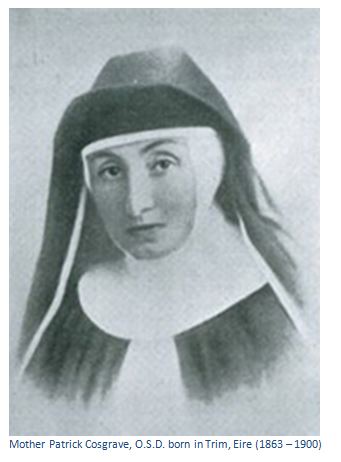 She records the lighter side of their community life: our evenings were enlivened beyond measure by Sister Frances who possessed a talent for mimicking anyone she could think of. We concluded the entertainment with an Irish jig. Sister Frances jigging away with an amusing variety of facial contortions, while I danced to the melodious strains of music. Then; we scrambled into the huge wagon with high spirits for at long last we would commence the tumble and jolt journey of about 400 miles. The five of us slept in the ox-wagon, the tall ones along the side, while Sister Constantia…being of short statue herself, fitted in cross-wise in the middle.

On May 10th 1890 with Macloutsie in sight she wrote; As the wagons drew near to the camp, the men formed two lines for us to pass through and burst into loud and prolonged cheers…the men outspanned (unyoked) and made ready to pull the wagons into the camp themselves; we got off and walked through the guard of honour into the hospital amidst loud and continued cheers, no uncertain sign that they were pleased we had come to take care of them.

Mother Patrick and her companions waited here and worked in the local hospital for ten months until the rains were over in March 1891. The five volunteers were teachers by profession and here they received nursing training from the doctors in charge. Describing the conditions there, she says, the hospital at Macloutsie consisted of two marques and two bell tents and held twenty-seven patients who were lying on the ground with nothing but their blankets and waterproof sheets to cover them. Nursing was difficult as the poor men were closely packed together; several of them were seriously ill and Sisters Amica and Constantia went on duty immediately. One patient died that night. Veld sores were a common complaint, some of which were so large as to cover almost a whole arm or leg. The Sisters felt nervous when alone on night duty for wild beasts prowled around the tents making weird noises.

Storms often blew the Sisters’ tents down when they were in bed, or at their meals, so huts were built for them on the orders of Rhodes and two of them were ready for occupation by the end of December when a second group of Sisters arrived at Mother Patrick’s request in March, from King William’s Town. These four German Sisters were Sister’s Berchmans Dreier (26) Bonaventura Kaltenstadler (20) Caroline Berchtold, (29) and Jacoba Zirn (34)

Sisters’ Jacoba, Caroline, Frances, and Ignatius continued nursing in Macloutsie; while In March, Sisters’ Patrick, Amica, Berchmans, Bonaventura, and Constantia left for Fort Tuli about 60 miles further on. Here too men were down with fever and required their urgent attention with very difficult nursing conditions. The Sisters lived in primitive conditions often plodding from tent to tent in the pelting rain, ankle deep in mud, sliding and slipping, while every now and then, a shoe would stick fast in the adhesive clay

On 5th June 1891 the five sisters and their chaplain, Fr Prestage, SJ, left Fort Tuli on the final leg to Fort Salisbury (now Harare) Their ox-wagon often stuck fast in swamps and mud and they all got out to help push. At last eighteen months after leaving King Williamstown they reached Salisbury (Harare) on 27th July 1891 ten months after the Pioneer Column had arrived, having covered more than 1,200 kilometres since their departure from South Africa.

As Thomas Pakenham remarks, the men cheered up at the beginning of the dry season. The first women arrived – nuns for the hospital and recruits for the red-light district.

They opened their hospital that consisted of three large huts, a marquee, and some tents, all in a poor state of repair and needing replacement on 1 August 1891. In the first three months of 1892, three hundred and eight patients, mostly suffering from malaria fever, were admitted. A better solution was required and a more permanent building was erected, consisting of two thatched pole and dhaka huts, each holding sixteen beds, a canvas ward with eight beds, and some isolation huts. Mother Patrick writes in her diary, we had to be on the warpath against the impudent and aggressive rats. Whenever a Sister had to go the dispensary hut, she would find a whole row of long-tailed rats sitting across the beam. They found their way into our beds, sat on the rim of our water buckets and dared even to invade the dinner table. Each patient was armed with a stick to beat off the enemy…one patient got a nasty bite from a rat and his thumb had to be amputated. After some time we procured a large cat and were soon rid of the rats. During the first moths of our stay in our new home, we were often in danger from snakes. One Sister picked up a cobra as it was lying between the beds of two patients…a few days later the cobra was found lying asleep under a pillow!

On 18th October 1892, a thatched pole and dhaka hut opened its door and ten pupils commenced lessons in their new school, this was the beginning of the Dominican Convent School.

In the early part of 1893, a small brick building was erected as a dormitory for the Sisters who until then had lived under canvas. Rhodes visited the Sisters and they told him of the urgency for a brick hospital. He agreed, and by the end of 1894 had provided the majority of funds required. The five original Sisters constituted the nursing staff, with Sister Patrick Cosgrave, 26, from Co Wexford, Ireland, as Superior of the group until Dr Andrew Fleming arrived in October 1894. 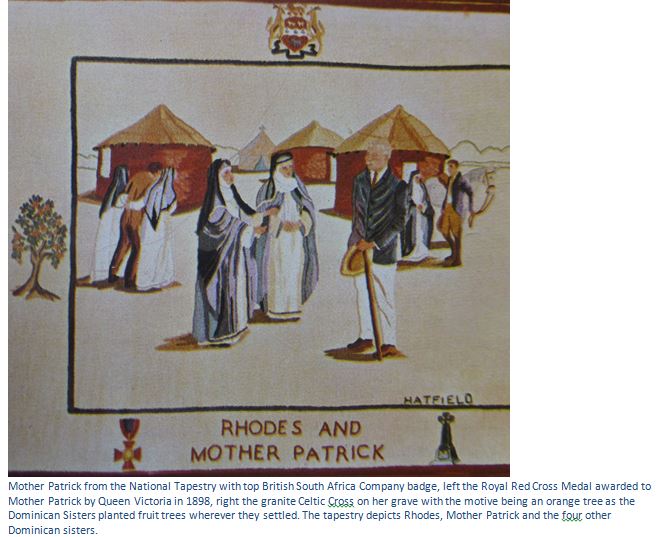 The new buildings were completed in ten months in 1894 and comprised single-storey brick under corrugated iron buildings arranged around three sides of a rectangle. There were two main wards for eight patients each and five small wards, consulting rooms, a doctor’s bedroom, kitchen and scullery and a special room with a high small window for cases of delirium tremens.

The mortuary featured here was omitted from the original plans and added afterwards. 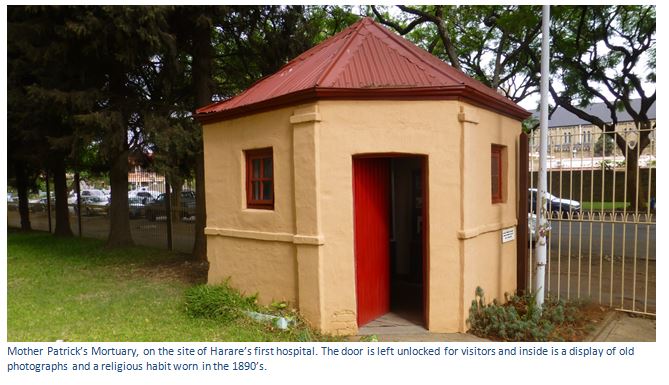 In early May 1896, Mother Patrick and a companion travelled to Gwelo (Now Gweru) where many of the wounded troops and civilians have been sent to convalesce during the Matabele Uprising, or First Umvukela. The courthouse has been turned into a hospital and a room prepared for the Sisters. The skilled work of mother Patrick and her companion and helpers over the next five months were much appreciated and there was deep disappointment when they were called back to help the victims of the Mashona Uprising in Salisbury. Initially in the laager around Salisbury gaol, they quickly moved back to their hospital site and carried on their nursing work.

Since 1892, several small groups of Sisters have come from King William’s Town, so that by the end of 1897 their total number has risen to about 30. However, the Dominicans of King William’s Town are a teaching congregation; it is becoming more and more difficult for them to satisfy the continuous demand for nursing sisters. After much discussion, they conclude that the Dominicans in Rhodesia (now Zimbabwe) should become independent of their Motherhouse in King Williams’ Town to enable them to adapt themselves better to local conditions and to look for and train their own recruits.

In April - May 1898, each Sister has to decide on either abandoning the mission and returning to King William’s Town, or declaring in writing that she wants to belong to the new congregation, and that she surrenders the right ever to return to the Motherhouse. Nineteen Sisters “desiring only God’s greater glory” decide to remain.

In December, a group of Sisters began missionary work at Chishawasha, a station 25 kilometres northeast of Harare started by the Jesuits six years previously. The Sisters started a school for young black girls, visited the sick in the neighbouring villages, and supplied medicine. Over the following decades, the Sisters moved into further mission stations in Rhodesia.

On January 6th1899, the Sisters unanimously elect Mother Patrick Prioress of all Dominican houses in the country. At the same time, they are increasingly worried about her health, as she has suffered from recurrent bouts of fever and has early stage tuberculosis; her health continued to decline throughout 1899. Her death on 31st July 1900 at the age of 37 years was not unexpected, but her fortitude in time of difficulty, her schemes for the expansion of the good work, especially the school, her thoughtfulness for others, scarcely relaxed or slackened  up to the very day of her death.

On the day of her funeral, all the stores closed as a mark of respect and flags flown at half-mast, and practically the whole town attended the burial service with all the vehicles in Salisbury forming part of the funeral cortege. The Mashonaland Irish association erected a granite Celtic cross that was unveiled on her feast day, the 17th March 1903. 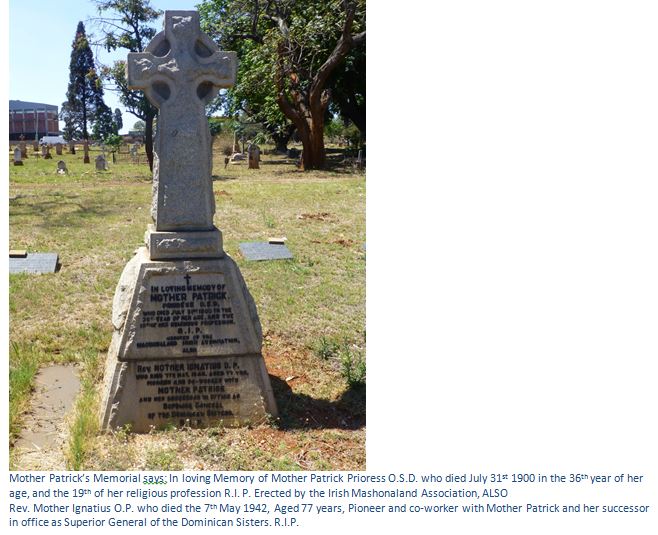 By 1908, there were beds for forty-three Europeans and twenty-three Africans, but the hospital could not cope with the town’s population growth. In 1911, twenty-five acres were granted in (formerly North Avenue) and double story building in the shape of St. Andrew’s cross was completed in 1914 and still form the basis for the Parirenyatwa Hospital complex.

Rhodesian Tapestry, a history in Needlework. Books of Rhodesia, Bulawayo 1971

When to visit:
All year around Monday to Sunday 8:30am to 4:30pm
Fee:
Not applicable
Category:
Historic
Building
Province:
Harare