Our government through its inept economic policies and widespread corruption is unable to provide any financing to the Zimbabwe Parks and Wildlife Management Authority and forces Zimparks to be self-sustaining, an impossible task in this year when the Covid-19 pandemic has deprived the country of any possibility of earning tourism revenue.

As a result, Zimparks which in a banner headline on its website www.zimparks.org.zw states “in harmony with nature” has been forced to sell hunting licences for as many as 500 elephant hunts to pay the salaries of its Game Rangers and for the expense of maintaining the eleven National Parks and additional eleven Recreational Parks under its care. 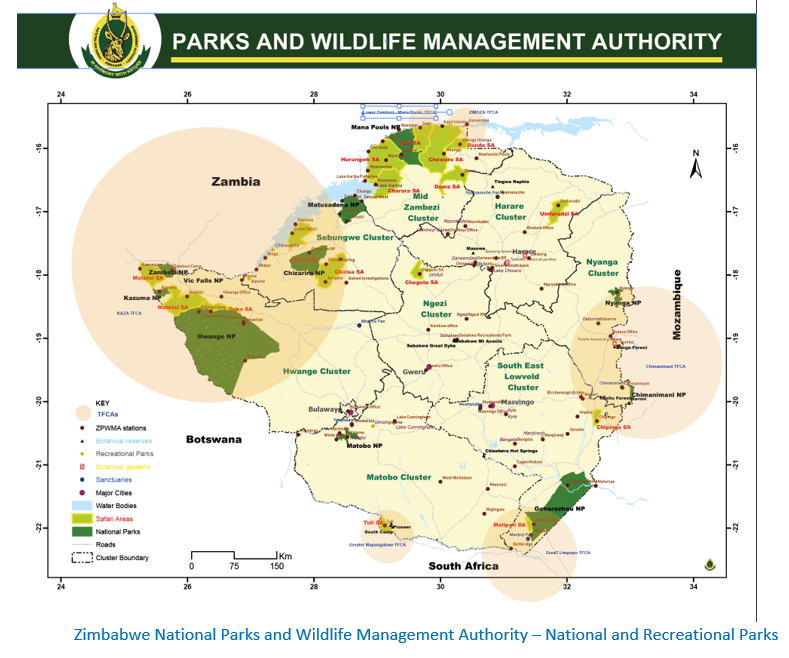 The country’s finances are in such a poor financial state that plans are to sell five hundred hunting licences in order that Zimparks can fund its national responsibilities.

The African elephant database[i] estimates that Botswana has the largest population with 131,626 elephants, Zimbabwe comes second with 82,630 and Namibia, the third largest, a long way behind with 22,754. All remaining Southern African countries (including South Africa) had just 56,437 elephants…just a remnant of the numbers that once walked this region.

Both Botswana and Zimbabwe plan to re-introduce commercial elephant hunts in the winter of 2021 and both have been heavily criticised by animal environmental groups. Botswana has had a five-year elephant hunting ban in place until this year.

In his article referenced below Godfrey Marawanyika quotes Tinashe Farawo, spokesperson for Zimparks who says: How do we fund our operations, how do we pay our men and women who spend 20 days (sic) in the bush looking after these animals...Those who are opposed to our management mechanism should instead be giving us the funding to manage better these animals.”[ii]

The financial circumstances behind his argument are correct…Zimparks needs to be properly funded just like all the other organisations in the country that safeguard the country’s resources such as Education, Public Works, Health and Child Welfare, Environment, Water and Climate. To insist that Zimparks is somehow different and should be self-funding when tourist revenues have totally collapsed during the Covid-19 pandemic is just an abrogation of responsibility by Government Ministers that care little for the welfare of their citizens and more about seeking opportunities for personal enrichment. 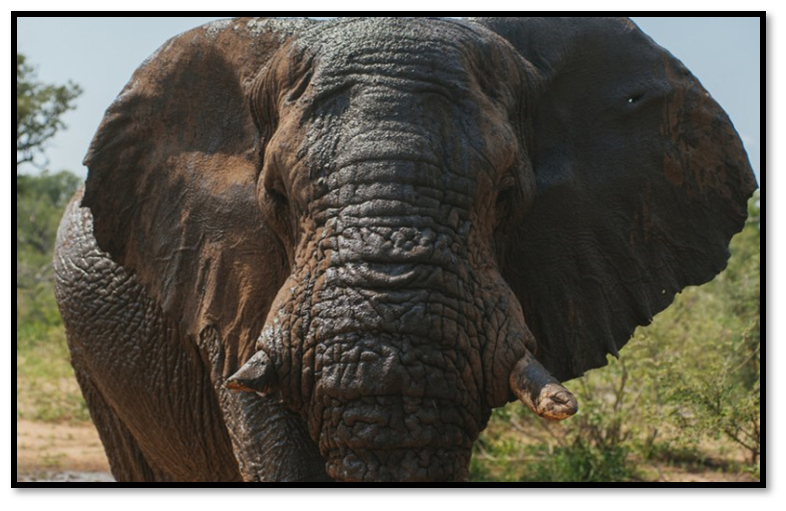 Hunting Licences to be sold for as much as $70,000 per Elephant

Zimparks has been forced into this regrettable situation that must clash with their own conservation ideals where they are compelled to auction off hunting licences to safari outfits in order to balance their budgets with rich trophy hunters from the USA, Russia, Germany, Italy and Mexico experiencing the dubious thrill of killing these wonderful creatures.

Safari outfits often justify their existence by saying that foreign hunters employ safari guides and sustain their employees in employment as trackers and camp employees. They point out that hunters pay $10,000 to $70,000 licence fees to shoot an elephant and on top of that pay a daily rate to the safari operator for providing the hunt infrastructure.

They argue that part of the licence fee is shared with local neighbouring communities and benefits local people with community development projects. In Zimbabwe, in practice local people gain almost nothing from the fees paid for hunting licences. The system is opaque, there is very little transparency, and it appears that more often than not the money is used to purchase high-end 4WD’s for senior officials within the organisation and Members of Parliament. This keeps them politically in line.

The argument too that by shooting older bull elephants no harm is done because they are no longer breeding is a false one. Older elephants take charge of bachelor herds and they teach the younger bulls good manners and keep them in check when they would otherwise become mischievous and cause distress amongst the elephants and to the human population.

The iWorry campaign by the David Sheldrick Wildlife Trust estimates that a living elephant brings in almost $1.6 million to National Parks such as Kruger in South Africa, or Amboseli in Kenya[iii] over its lifetime in ecotourism dollars. This is because in countries where there is flourishing tourism each photo-snapping and elephant-watching tourist is paying park entrance fees, guiding fees, souvenirs and accommodation that employs staff and generates tourist dollars. This income can be repeatedly paid by each tourist as long as the elephant is alive. The fact that Zimbabwe is not included in these tourist destinations does not reflect on the quality of the wildlife, or the integrity of Zimparks, but is the result of Zimbabwe’s poor governance and dismal political record that have caused it to be shunned by international tourists, except for the Victoria Falls.

Zimbabwe could thrive as a tourist destination, instead of being a pariah state, it just requires good political governance and sound economic policies. Zimparks has the potential to easily self-generate sufficient funds for the maintenance and improvement of all its properties if the ZANU-PF government turned its back on its current poor practices that result in an economy that is politically unstable and rampantly corrupt.

You don’t need an economics degree to see that $70,000 from a hunting licence pales in significance to the $1.6 million that a savannah elephant will generate in tourist-friendly dollars over its lifetime. 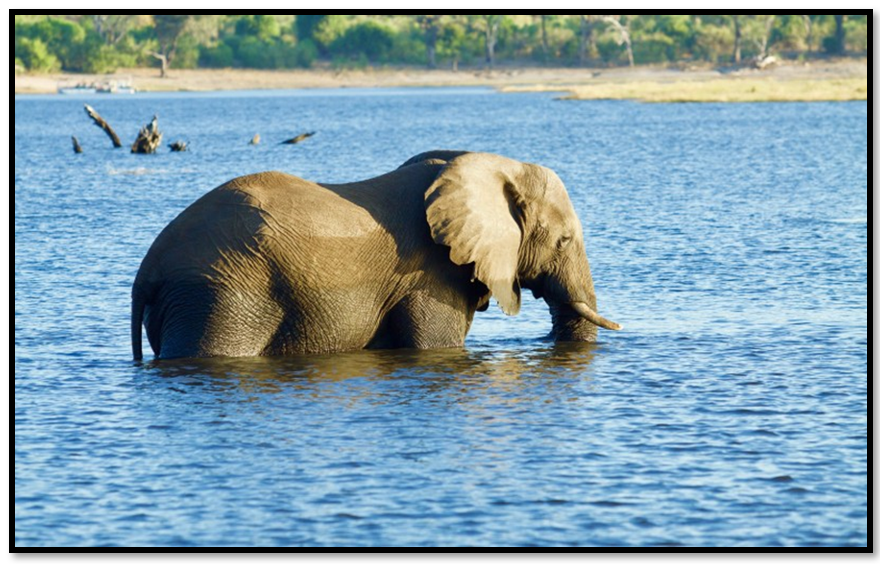 Elephants are worth much more alive than dead

The International Monetary Fund’s Ralph Chamihas estimated that forest elephants[iv] are worth $1.75 million for each animal, much more than the $4,000 a poacher might get for shooting the animal for ivory. Whales are worth slightly more at over $2 million, he also estimates, due to their “startling” carbon capture potential, and therefore also deserve better protection.[v]

It is a highly controversial way of thinking about nature; in the same article Naeem, a Professor of Ecology at Columbia University, often relies on humour to explain it and says that it doesn’t mean that fungi are about to unionise and charge humans for decomposition services! Although, if they did, it would get expensive. We would be in even bigger trouble if the trees started to charge us for oxygen. Really, he says, ecosystem services are meant to help us understand that plants, animals and intact ecosystems are worth more to humans alive than dead.

The same article makes the case for the financial value of ecosystem services being at the heart of much of 21st century conservation, increasingly guiding economic decision-making and government policy. This was on the agenda at Davos 2021 in discussions about protecting the Amazon and the post-Covid economic recovery and is likely to be a central issue in UN discussions on a Paris-style agreement on biodiversity to be negotiated in Kunming, China, later this year.

How do you value an elephant’s life?

It is certainly not valid to value an elephant’s life based on how much a hunter is prepared to pay to kill one as a trophy. An elephant can only be killed once giving it a one-time value in terms of hunting value.

An elephant needs to be valued in terms of how much money it will bring to the nearby communities and to the country as a whole. In the past elephant herds wandered free, but increasingly humans are taking over their habitat and this awareness led to the establishment of Zimbabwe’s National Parks which are dedicated to the conservation and preservation of wild animals in an environment that humans can also safely enjoy.

Some people argue that Zimbabwe has too many elephants

One argument used by many is that the number of elephants is higher than can be reasonably sustained and that culling excess elephants by hunting relieves the pressure on the land and on humans. This argument is used by the Zimparks spokesman as justification: “An excessive number of elephants, Zimbabwe has close to 100,000, has also increased the number of accidents when people encounter them…These include damage to crops and occasional fatalities when the elephants encounter people” and he added: “The distress calls from the communities have been increasing due to human wildlife conflict…So far [in 2021] 21 people have lost their lives and last year 60 people.”[vi]

However, the focus needs to be on investing in Zimbabwe’s land, people and the wildlife. If communities bordering the National Parks are given the ideas and tools to minimise human-elephant conflict then both the elephant herds and neighbouring communities can flourish [See the article Strategies for keeping elephants away from Zimbabwe’s communities under Mashonaland West on the website www.zimfieldguide.com] If we apply these strategies then even those that presently do not like elephants, because they have destroyed crops, or had their safety threatened by them, may come to value them instead.

In reality the denser that elephant populations are in an area, and we see that Zimbabwe has quite a high density, the more tourists are willing to spend for a chance to view them in their natural habitat. Elephant numbers are a draw, rather than a problem.

Our elephants should be viewed as priceless; they are a wonderful natural resource, the basis for a thriving tourist-friendly economy and in truth we should never put a value on them.

Zimparks mission is to save elephants, not to encourage hunters to kill them

Zimparks should be allowed to get on with their mission to create safe havens within Zimbabwe’s National Parks for elephants where they are heavily guarded against poachers, where hunting isn’t necessary, and where human-elephant conflict is rare, if not eradicated. Then elephant families will flourish, exponentially increasing their value to the community.[viii] 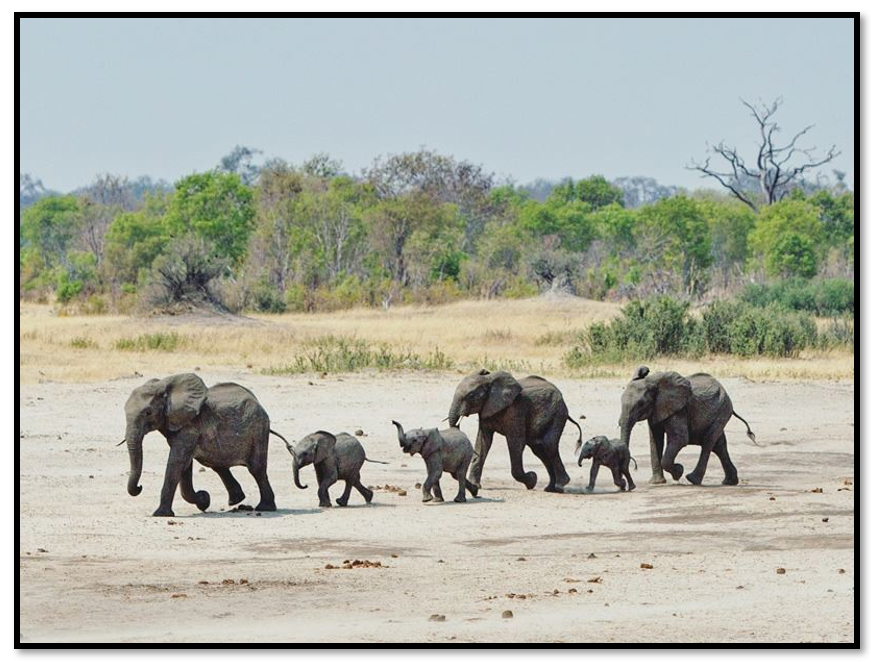 [iv] International Union for Conservation of Nature (IUCN) has finally recognised the African elephant as two separate species – the forest elephant and savanna elephant. The number of forest elephants in the wild in Africa had fallen by more than 86 percent over three decades and were now considered “critically endangered” – just a step away from becoming extinct, it said.

[v] How much is an elephant worth? Meet the ecologists doing the sums