This is one of the very oldest buildings still standing. Although the building looks unprepossessing  with its corrugated iron roof and squat shape it should be remembered that the iron roof sheeting was brought hundreds of kilometres by ox-wagon, the timber similarly imported, or cut in local sawmills and the bricks made by hand down by the Mukuvisi River.

Nine leading citizens including W.E. Fairbridge, H.J. Deary, and E.E. Homan formed the Salisbury Market Hall Co. Ltd with the object of securing some land in the Market Square and constructing a building that would include a market hall, offices and shops, a telegraph office and a bank. E.A. Maund purchased the lease from the company on 1st July 1893, work began on the main hall to measure 20 x 10 x 12 metres high, and Mrs H.J. Deary laid the foundation stone on 8th August 1893. E.A. Maund also built The Residency at 92 Baines Avenue / 2nd Street (A1)

By the end of September, the Market Hall comprised the central hall with a tall arched door at either end, with the front flanked by two offices, one for the use of Charles Maddocks, the Market Master. Then construction ceased during the military occupation of Matabeland in late 1893 as most able-bodied men joined the action and building activity came to a standstill. Maund arranged for an illuminated clock made by W. Burden of Salisbury England to be installed in the centre of the front gable and this chimed the hours from Christmas Eve 1894. 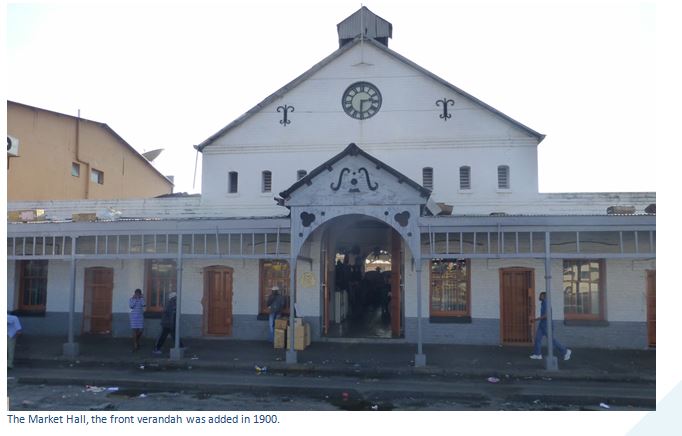 Photos of 1896 show a row of shops or offices on either side of the Market Hall. From then and for many years the Market Hall was used for the selling of agricultural produce grown by Indian and Chinese market gardeners on the banks of the Mukuvisi River. The vegetables were stacked on trestle tables hired from the Market Master and in the early years, it was a weekly event that was looked forward to by both buyers and sellers. The problem was that the vegetables were auctioned and the large buyers, the hotels and retailers, monopolised the event. Small customers had to buy from hawkers who came from outside the town’s boundaries and they became so numerous that by 1918 sales of vegetables at the Market Hall ended.

After the 1896 / 7 Mashona uprising  / First Chimurenga, a curfew bell was hung outside the entrance to the Market Hall  at 9 o’clock by which time all Africans had to be off the streets,  in 1900 the curfew bell was moved into the wood and iron housing built onto the roof ridge.

In May 1899, a new agreement was signed between the town council and the Exploring land and Minerals Co. Ltd called the Market Hall Concession with a lease of 50 years at £5 per annum. The Hall was to be used by the Council for selling market produce between 2 am – 10 am daily and the Company was to erect buildings worth £5,000 within two years. St Swithin’s buildings, a handsome block of offices, were named after the street in which the BSA Company’s offices were in London, was built on the southern portion of the leased land. This building was demolished in 1963.

To the right of the entrance was a Post and Telegraph Office that charged two shillings and sixpence to send ten words to Causeway Post Office. It was pointed out in letters to the Rhodesia Herald that an African boy would take the same message by foot in almost the same time for sixpence.

Also in May 1899, the Beira Railway reached Salisbury (now Harare), the Market Hall was decorated in bunting, and flags and a large banner read: “Welcome to Salisbury. 1890 – 1899.”

In October 1899, the Second Anglo-Boer War broke out and a detachment of volunteers paraded in front of the Market Hall and led by the British South Africa Police band marched up Abercorn Street.

The building served as Council offices until the Town House was built in 1902. After 1918, various companies took up offices, but Saturday morning markets continued in the hall and it was hired out for concerts, roller skating, meetings and cinema shows. The Saturday morning auction sale on the square itself became increasingly popular as the social event of the week with people coming from far and wide on carts, wagons, and bicycles. Ploughs, guns and cartridges, mules, cattle, furniture and books were sold. Sir Roy Welensky, the Federal Prime Minister, was born in Kaguvi Street (formerly Pioneer Street) remembered the Market Hall in 1913 when to his young eyes it appeared very dilapidated and was used by the auctioneers in market square for storage.

The building was restored to its 1900 appearance with the iron and timber verandah and the walls were painted to protect the soft bricks from weathering, the interior openings were widened and offices demolished to make it more open and give more light. The first chiming clock which operated from 1894 – 1952, was also replaced and today it is still in use as a people’s market.