How did COVID-19 happen?

This question of how the virus managed to make the transition from animals to humans still leaves scientists divided but when we do have the answer to this question it will leave us better equipped for future pandemics.[i]

Scientists are pretty sure from studying the genetics of the virus that bats are the original source. Virologists found a bat virus that's genetically 96% similar to SARS-CoV-2, the coronavirus that causes the disease COVID-19. Here’s why they are such a convenient host:

(3)  Bats are the only mammal that can fly and from the stress incurred in flying they have evolved very robust immune systems. So, if the virus can live inside a bat, it finds life in humans with their weaker immune systems relatively easy 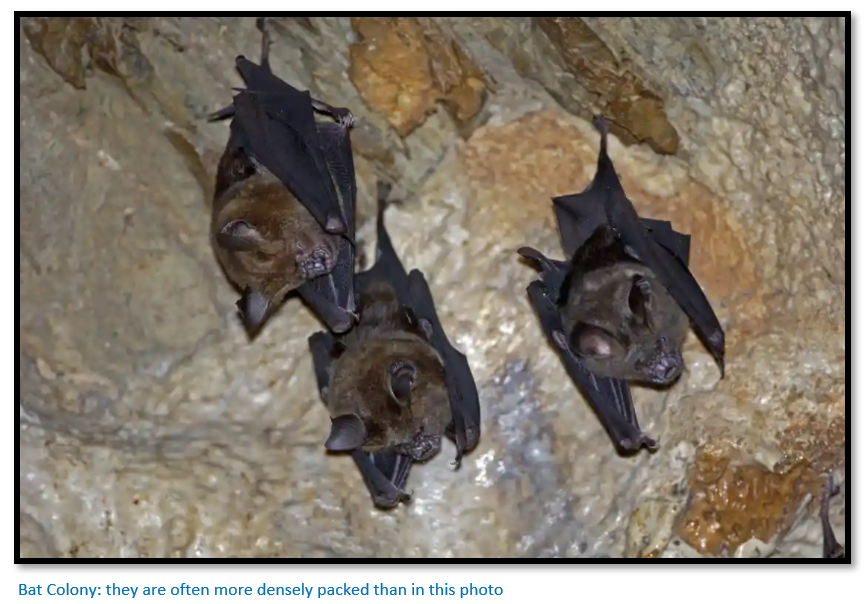 Did the latest COVID-19 pandemic outbreak cause surprise?

Not really, the first Severe Acute Respiratory Syndrome (SARS) virus originated from horseshoe bats before spreading to humans through civet cats[ii] sold for meat in local markets another animal in 2002-3.[iii]

In the scientific literature in 2019 alone there were at least three predictions that there was the likely prospect of another SARS virus making the transition from bats to humans in Asia alone.

There are precedents and two previous incidents are telling: Australia’s 1994 Hendra virus infections, in which the contagion jumped from horses to humans, and Malaysia’s 1998 Nipah virus outbreak, in which it moved from pigs to people. Both diseases were caused by pathogens that originated in fruit-eating bats. Horses and pigs were merely the intermediate hosts.[iv]

Whose to blame for these repeated outbreaks?

Most scientific experts say that we shouldn’t blame the bats. There are two forces that have contributed to the problem:

Peter Daszak, a disease ecologist who travelled with the recent WHO team to China stated that the most likely source of the COVID-19 pandemic was wildlife farms in southern China. Those wildlife farms, including ones in the Yunnan region, are part of a unique project that the Chinese government has been promoting for 20 years now. "They take exotic animals, like civets, porcupines, pangolins, raccoon dogs and bamboo rats and they breed them in captivity."[v] They are bred for their meat, fur and in the case of pangolins their scales are used in traditional Chinese medicines.

He continues: "China promoted the farming of wildlife as a way to alleviate rural populations out of poverty…The farms helped the government meet ambitious goals of closing the rural-urban divide…It was very successful…In 2016, they had 14 million people employed in wildlife farms, and it was a $70 billion industry."

The small farms were promoted by government officials as a way to reduce poverty in rural areas of China with few other job opportunities; they numbered in the thousands and employed millions of people.

Before the pandemic, these wildlife farms kept China’s markets stocked with live animals—civets, bamboo rats, crocodiles, porcupines, and snakes, among others—primarily for sale to restaurants. High-end restaurateurs used civet meat—considered a delicacy by some in China—as an ingredient in a pricey soup that might also include snake meat.[vi]

Many of the animals, such as civets, live penned together for 8 to 12 months before being sold and being housed closely together and often in unsanitary conditions, the potential for disease spread is greatly enhanced. 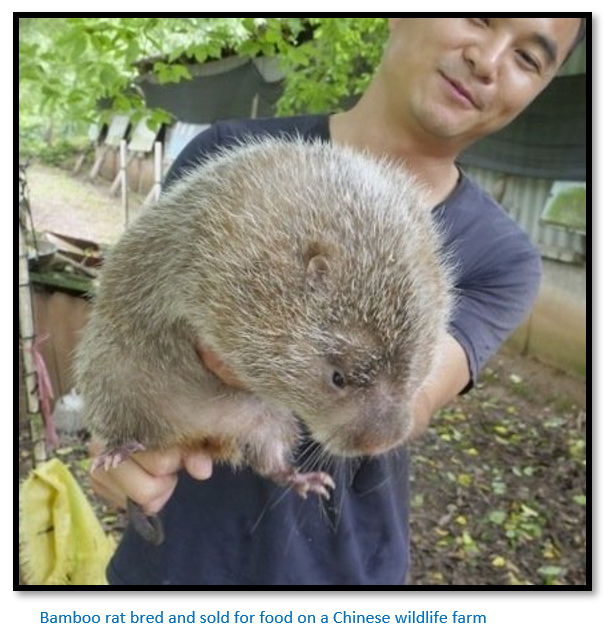 Then on 24 February 2020 when the COVID-19 outbreak in Wuhan was winding down the Chinese government made a complete about-face on the wildlife farms and issued declarations saying that they were going to stop the farming of wildlife for food. Daszak says: "They sent out instructions to the farmers about how to safely dispose of the animals — to bury, kill or burn them — in a way that didn't spread disease."

However, scientists claim that although China has banned the sale and consumption of wild animals for food, it has allowed farmers to continue raising wildlife for other purposes, such as fur and traditional Chinese medicine. Pangolin scales for example are a valuable ingredient used in traditional Chinese medicine. That means the risk of disease spreading from captive wild animals has not been eliminated.

Why were wildlife farms so suddenly banned?

Both Chinese scientists and then the WHO's team to China found evidence that these wildlife farms were supplying sellers at the Huanan Seafood Wholesale Market in Wuhan, where an early outbreak of COVID-19 occurred. After the market was linked to cases of what was then described as a mysterious pneumonia-like illness it was shut down overnight on 31 December 2019.

Chinese scientists and finally the Chinese government realised that the existence of the wildlife farms led to the jump from bats to intermediary animals and then to humans.

A wildlife farm may have displaced or provided a new home for a colony of the rhinolophid[vii] bats that harbour the virus. With the bats in the dark rooftops of the wildlife farm barns, their faeces probably fell into the food of one of the farm animals below (the “intermediate”)

Once the virus was incubating in a captive animal—whether that animal came from the wild or was bred on the farm—the pathogen could then have hopped from animal to animal, mutating in the process. By the time the animal arrived at Huanan or other markets in Wuhan, the virus could have evolved to the point where it could take hold in yet another species: humans.

Scientists still aren’t sure what this intermediate animal was: the pangolin was suspected early because it has closely related viruses, but subsequent studies have thrown this into doubt. It might have been a racoon dog, a palm civet, a ferret badger or a bamboo rat. Whatever it was, the intermediate animal was probably taken alive on a truck to Huanan Seafood Wholesale Market in Wuhan, a wildlife market. There, possibly at the point of slaughter is where the jump probably happened, and the first human became infected.

Daszak says: "I do think that SARS-CoV-2 first got into people in South China. It's looking that way." 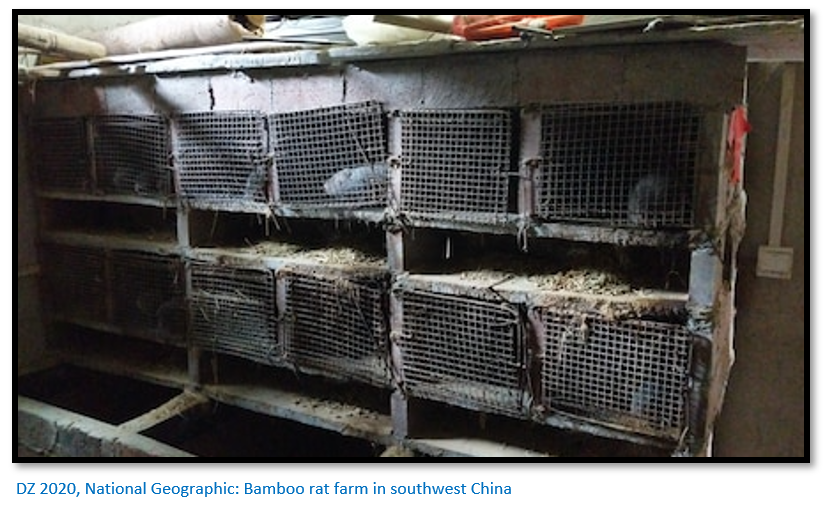 The evidence behind this claim

(1)Many of these wildlife farms are located in or around the southern province of Huanan.

(2)Bats have been found in Huanan province with a bat virus that's genetically 96% similar to SARS-CoV-2, the coronavirus that causes the disease COVID-19.

(3)Finally, the wildlife farms are known to breed animals such as civet cats and pangolins that are known to naturally carry coronaviruses. Over time they have built up an immunity to these coronaviruses, but humans have not.

Daszak told NPR that:” …it’s human destruction of their [Bats] natural environment that is driving them to live closer to other animals that then become the intermediary animal from which the virus jumps to humans.”

Many of the Chinese wildlife farms now closed were on the edge of natural wilderness areas, so captive animals easily could have become infected by the faeces of nearby infected bats. 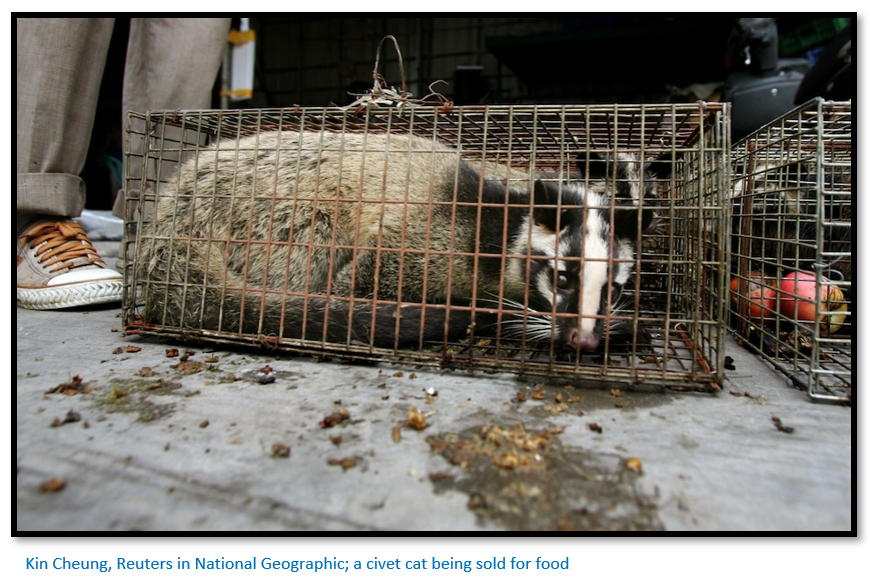 What tentative conclusions can be drawn?

The scientist Peter Daszak thinks that the Chinese government response was a strong signal that they thought those wildlife farms were the most probable pathway for a coronavirus in bats in southern China to reach humans in Wuhan.

But given the circumstances, is the COVID-19 pandemic bad-luck, or inevitable?

A number of favourable conditions need to be lined up in order for the virus to jump from a bat into another animal, and from that animal into a human. That intermediate animal has to come into close contact with a human and that human had to come into contact with lots of other humans.

Of the 1.7 million viruses thought to be circulating in animals, barely any ever make that leap. Dr William Karesh, advisor to the WHO is quoted in the same NCP article saying: “…over the last half-century, we’ve encroached further and further into wild territory, destroying animal habitats and increasing our interactions with animals. When you have hundreds of millions of people going to live animal markets, and you’re a virus, you have 100 million lottery tickets to make the jump. There’s a good chance one of those viruses is going to make the jump.”

[i] Chris Van Tulleken. 22 March 2021. Why Covid happened - and what the next pandemic might look like. BBC Radio 4

[iii] According to the World Health Organization (WHO) a total of 8,098 people worldwide became sick with SARS during the 2003 outbreak. Of these, 774 died. In the United States, only eight people had laboratory evidence of SARS-CoV infection. All of these people had travelled to other parts of the world where SARS was spreading. SARS did not spread more widely in the community in the United States.

[vii] a leaf-nosed bat of the family Rhinolophidae