National Monument No.:
73
Why Visit?:

Best avoided in its current state

From rotten Row turn left into Ranche Way. Skipper Hoste Drive is a one-way system, the first road right is the exit from the Harare Toposcope, and the second road right is the entrance. Drive up the kopje, be careful negotiating the steep curve and DO NOT STOP as directed, or you will be hassled and berated by units of the ZNA, before parking at the car park on the top. 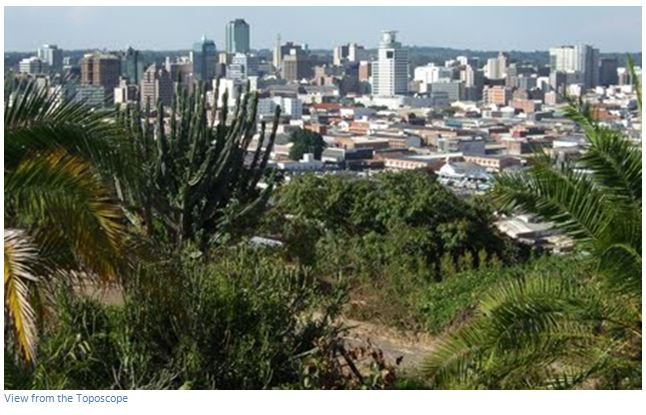 Visits to the Harare Toposcope are best avoided. Skipper Hoste Drive that visitors use to drive up the Harare kopje is neglected and covered in litter; the Zimbabwe National Army has an anti-aircraft unit parked on the southern tip of the drive, which is cause for caution, and the Toposcope itself has been destroyed. All the former plaques indicating distances to various local and international destinations have been stolen and the view over Harare is not worth the trip. This National Monument should be restored or delisted, it is rather ironic that this is probably the closest National Monument to the NMMZ headquarters in Rotten Row. The altitude at the Toposcope is 1,539.8 metres or 5,051.8 feet above sea level. 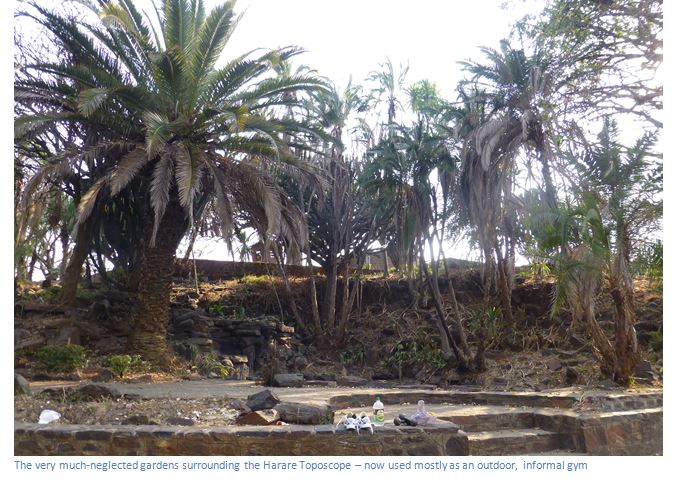 At the time of the Pioneer Column’s occupation in September 1890, the kopje belonged to Chief Gutsa’s people who had taken possession from Chief Mbare after they defeated him in a skirmish. There are no Iron Age buildings still standing on the kopje from the period, but no doubt the hill was a well-known landmark and walling and hut circles have been found in the hills around.

Chief Neharawa, after whom Harare is named, is reputedly buried within the vicinity of the kopje. The name means, “he does not sleep.” The actual kopje area covers around 15 hectares (37 acres) and was declared a National monument in 1968. 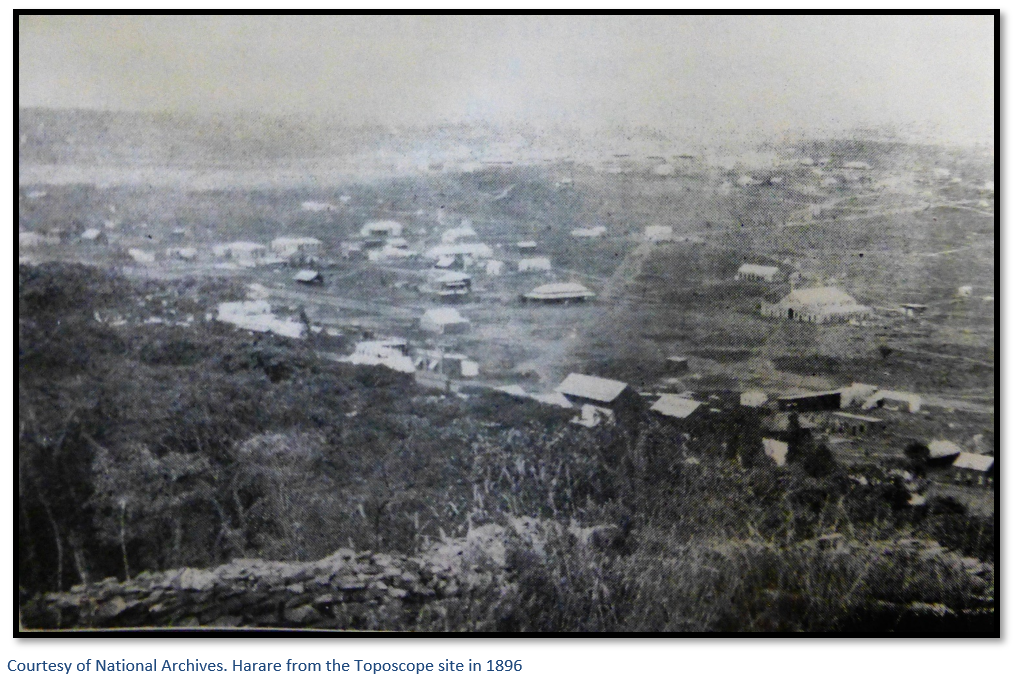 In the photo above the Market Hall is the large building in the centre right. The Causeway is the marshy unoccupied area between Pioneer Street and the commercial hub below the kopje and the administrative offices in the background.

Today the state of the kopje is synonymous with the current state of Harare’s City Council. The lower surrounds of the hill are covered with dumped litter, the roads are in poor shape, the hillsides are used as a public toilet, and many of the Msasa trees have been cut for firewood. The toposcope is destroyed and the public gardens that used to make the site so attractive have gone to ruin. It is no longer a place that you would want to take a visitor to give them a bird’s eye view of the city. The fact that this is also the closest monument to the offices of the NMMZ and the City of Harare and that it is in such bad shape makes it even more shameful.

When to visit:
All year around Monday to Sunday 6am to 6pm
Fee:
Entrance free
Category:
Scenic
Province:
Harare