The Meikle Brothers came to Zimbabwe (then Rhodesia) in 1892. Stewart opened a store at Fort Tuli, John was in Fort Victoria (now Masvingo) and Tom had a store in Pioneer Street (now Kaguvi Street) Salisbury (now Harare) In 1894 Tom opened further stores in Bulawayo and Gwelo (now Gweru) In 1896 John started farming in Umtali (now Mutare) and then Stewart decided to open hotels, but died in 1912, leaving Tom to implement the idea. 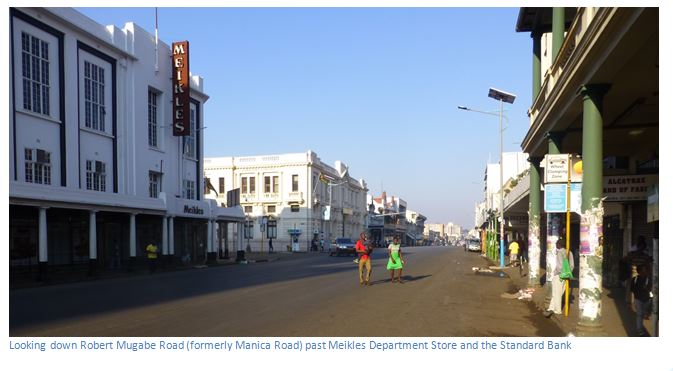 The middle gable contains the completion date “Anno Domini MCMX.” Arnold had the property built for his own use as auctioneers rooms (left below) and two shop units (right below) on the ground floor and his personal rooms on the first floor. The main feature is the ornate double-storey balcony verandah on the front with its ornate ironwork of six columns on each floor made by Wade and Dorman of Durban. 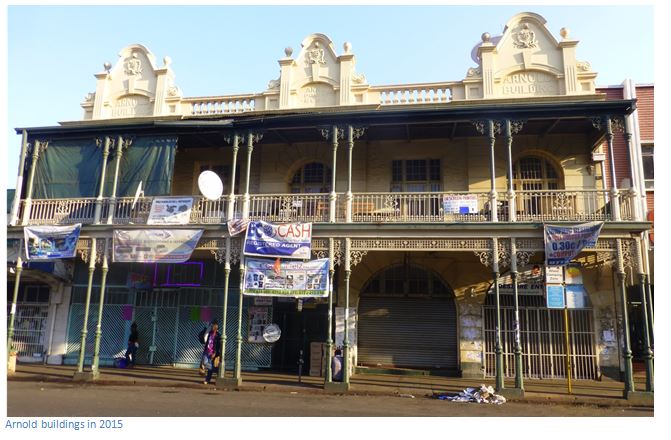 Arnold’s auctioneer’s rooms were on the western side of the ground floor (left side of the photo) and had a brass and glazed shop front with ceiling mirrors over the entrance doors reflecting the marble tessellated floors. The glazed teak door, with original brass handles and kickplate is still in place. The interior has pressed metal ceilings and a timber floor.

The middle of the ground floor has an entrance lobby that divides the shop and has a teak staircase with elaborate newel post at its foot. The two eastern shop fronts have teak surrounds and curved doors with their attractive original hinges and both shops have their original pressed metal ceilings and timber floors.

The BSA Company granted this stand in 1895, but after a number of companies were liquidated, Cope-Christie was commissioned by its owners, Cambitsi and Vassilatos (V&C) to design bank premises and offices for letting. The original building on the ground floor had a banking hall with strong room and offices with two shop fronts with offices on the first floor. 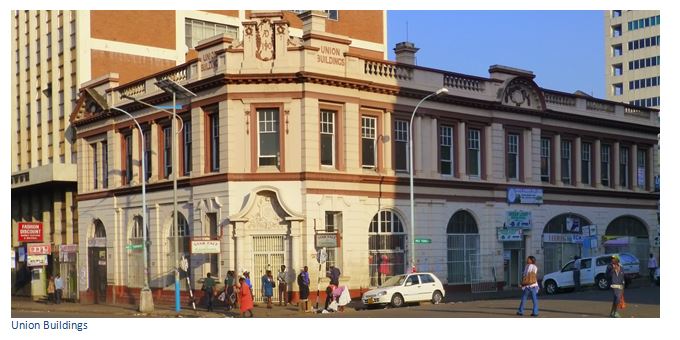 Curved granite steps lead into the former banking hall with “ABC Ltd” set into the black tessellated paving and three large Tuscan columns dominate the interior that has steel pressed ceilings. A timber staircase leads to the first floor through an arched portico with arched glazed timber doors. The first floor rooms all have pressed metal ceilings and timber floors.

The exterior façade features a semi-balustraded parapet that hides the corrugated iron roof. The first floor has large sash windows divided in half with a clear glazed lower sash and six small panes in the upper sash. The ground floor features rusticated arches and large square windows. The corner portico entrance has a Cape Dutch pediment on Tuscan arches.  The pediment has C&V with the date AD 1910 and UNION BUILDINGS on the parapets.

The four brothers, Robert, John, Albert and Frederick Store and Stephen Sugden bought the stand in 1910 and set up as drapers and milliners. The main feature is the cast iron double-storey verandah that was made by MacFarlane’s of Strathclyde and has floral decorations on the column heads and first floor balustrading. The building forms a pair with Adams Building with similarly shaped corrugated iron roofs. The gable with three vertical windows has a plaque inscribed AD 1911 and STORE BROTHERS.

The first floor is divided into three feature windows with some decorative stained glass and is an open area with timber floors. Originally, two light wells illuminated the shop below, but are now closed. An attractive staircase leads down to the ground floor that has cast iron columns down the centre of the shop. The ground floor now has a concrete floor and sash windows light the rear of both floors.

The shop front is a fine example of its type with glass panels within timber frames and hardwood doors with bevelled glass and original brass work. 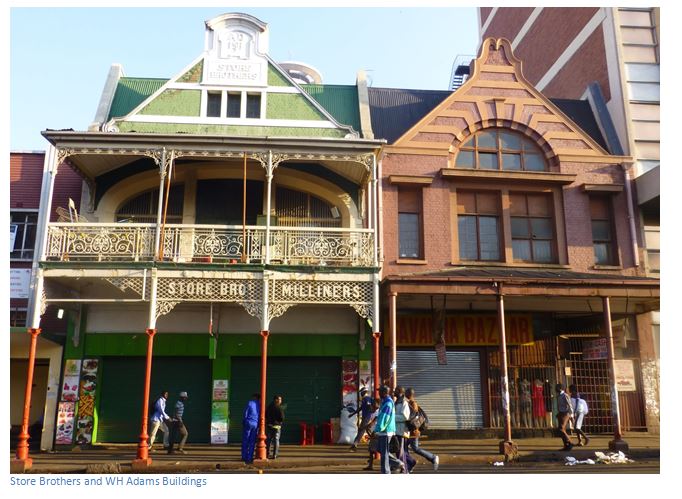 This building, which appears on the right above, was a “Gents Complete Outfitter” and was owned by Adams until 1937. The double storey building has a lean-to corrugated iron ground floor verandah standing on granite pedestals. The shop front is no longer original. It had two entrance doors, although only one door remains. ADAMS is set into the tessellated entrance paving. The door handles and kickplate are original. The building has a very distinctive gable with a large semi-circular window with horizontal bands of stucco and an unusual “beaked” motif.

The interior has two open floors, the first floor with pine boards divided in half by cast iron columns made by Wade and Dorman of Durban (who also did the ironwork in the Arnold Building)  The ground floor has modern vinyl floor tiles. The ceilings are pressed metal and a very dramatic hardwood staircase rises through a large open stairwell.

The building still has one of the few double-storey balcony veranda’s and original shop fronts and single recessed entrance doors on either side of the central lobby and a timber staircase to the first floor. The shop front on the right of the photo had curved glass windows and hardwood entrance door and panels with original brass handles and kickplate and the original shopfitters name “S. Haskins & bros, London, England.”

The timber dogleg staircase was lit up by a large window in the stairwell and there are nine first floor offices off a central passage with their original timber floors, pressed metal ceilings and original panelled doors. 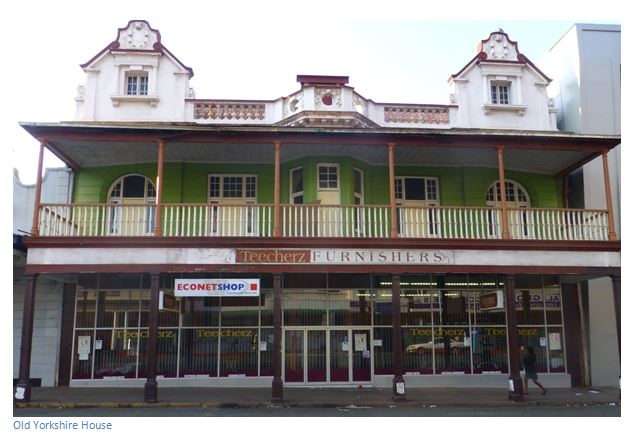 The roof has a balustrade; the central section has a balcony projection with a central dormer, the ends have unusual pedimented gables giving them a Cape Dutch flavour.  For many years, the Bamboo Inn operated from the ground floor on the left of the photo until the owner — George Danville Kee — was brutally murdered there in mysterious circumstances in 1999. The Kee brothers’ father started the famous old Harare / Salisbury eatery more than half-a-century ago, having emigrated from China. Once upon a time, there were two excellent Chinese eateries within about 150 metres of each other in Manica / Mugabe Road: The Bamboo Inn and The Mandarin. The Bamboo Inn had a “Chinese roof” addition that made the building a landmark, but this has now gone. On the right hand side of the building was Charles E. Harris, another familiar old name.

The original building had three storeys including an extensive basement vault and an Assay office at the rear of the stand. The ground floor had a banking hall and bank offices with a separate shop where the two right-hand windows are now. The door on the far right provides access to the Standard Chambers that were let on the first floor. 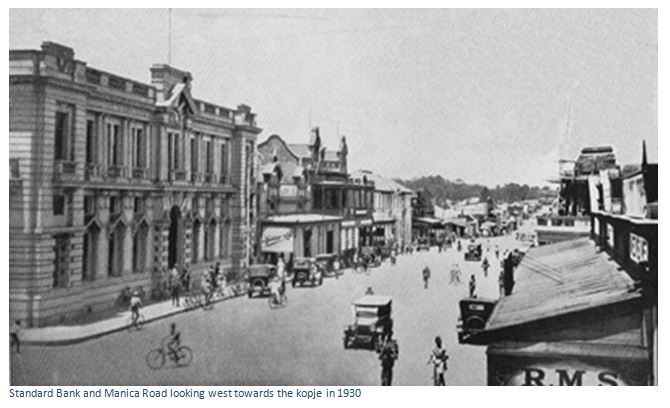 In 1939, D’Arcy Cathcart enlarged the banking hall by extending to the rear of the stand and taking out the separate shop. A large dome with a coloured glass lantern supported on piers was introduced to light up the banking hall, the bank took over the first floor offices, and an Otis lift was installed.

The corners and middle of the building are slightly projected and rusticated pilasters form architraves to the ground floor door and window openings that were very similar to those on the now demolished Queen Victoria Memorial Library also designed by Cope-Christie.  The sash windows with their arches on the ground floor, balustraded balconies and Ionic columns on the first floor give a pleasing three-dimensional quality to the façade.

In 1986 when Peter Jackson published his book on Historic Buildings of Harare, the interior of Fereday’s still had its original shop fittings comprising beautiful hardwood counters with dozens of small drawers for hunting and fishing accessories, gun racks and four mounted antelope heads of kudu, sable, bushbuck and waterbuck shot in 1919 on the site of the present Harare international airport by A. Bagnell, another gunsmith. The central feature of the roof was a roof lantern supported by four iron columns and the shop had the original string holders and cash till.

Above the windows is a mezzanine floor with storage shelving which was accessed by ladder. The storage areas and gunsmiths rooms at the rear were also approached beneath a rear mezzanine floor on which were painted reproductions of early cycling advertisements. 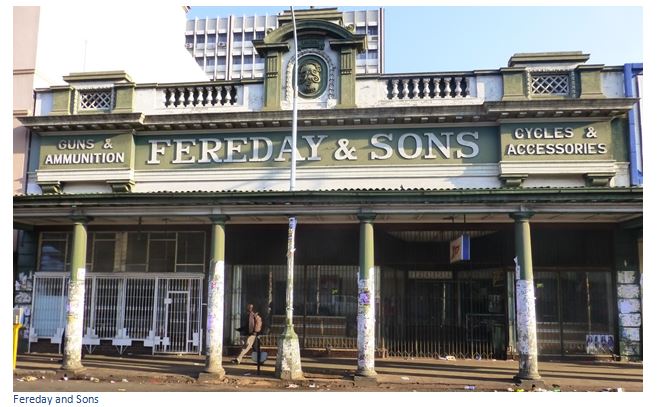 Externally the single-storey iron verandah is supported on six grand Doric columns and the original doors have outstanding brass handles and kick plates. Above is a balustraded parapet with the inscription “Guns and ammunition” on the left and “Cycles and Accessories” on the right. The gable reads, “Erected 1923 F&S established 1910” with below “FEREDAY & SONS”

This massive brick structure with 60cm thick ground floors originally has three vertical compartments with timber floors supported on an internal steel structure. By 1985 when the entire building was renovated into an office block by Metro-Peech the internal structures had gone and it was almost an empty shell up to the corrugated iron roof. Originally a soap factory designed by Cope-Christie in 1918, industrial complex developed into a maize mill with grain stores and a railway spur serving the rear of the site.

The conversion from mill to offices required new concrete floors supported on an independent concrete frame. A new stairwell was incorporated and the original fire escape relocated at the rear of the building and the original steel industrial pivot windows were retained. The executive offices on the top floor have panelled doors from Rumbavu Park, the original home of the Peech family. Since then, the building has been turned into an IT Centre and the former milling complex because of its central location has become an odd assortment of service and retail businesses. 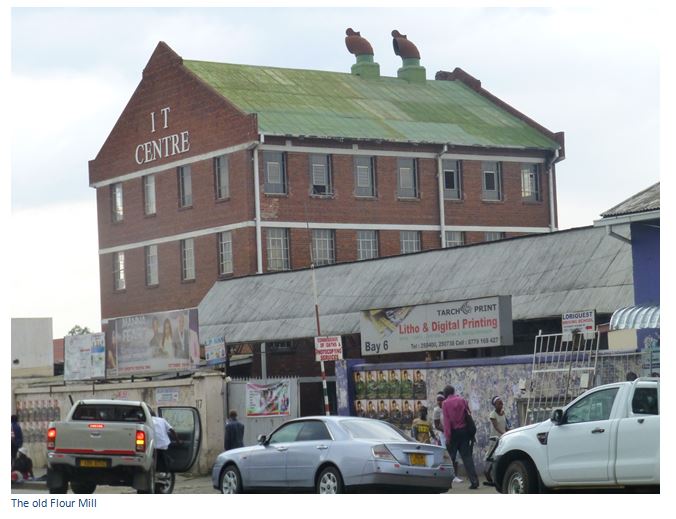