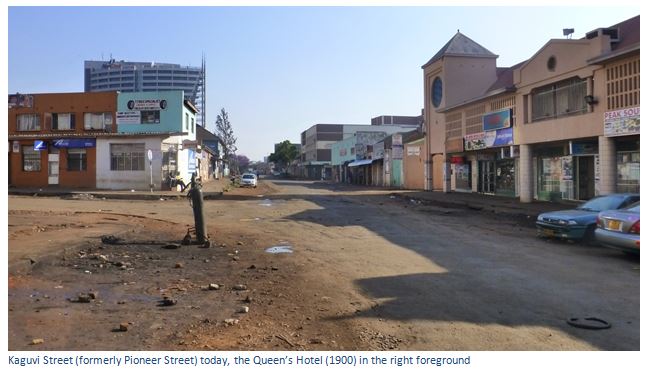 The Queen’s Hotel was opened on 31 December 1899 on the eve of the twentieth century and consisted of a single storey building on the corner of Robert Mugabe Road (formerly Manica Road) and Kaguvi Street (formerly Pioneer Street) The street side of the building was wrapped in a long timber and iron verandah and the hotel had a billiards room, bar and a dining room which was equipped with a stage and acetylene lamps. A “U”- shaped block on the adjacent stand 418 behind comprised the bedrooms.

The first proprietor was George Farthing who purchased the hotel in 1904 when it featured significantly in the town’s early social and civic history. Disputes between the town’s citizens and the Council, or the BSA Company, often resulted in stormy meetings at the Queen’s Hotel. A rickshaw service, called the Salisbury rickshaw service, operated between the hotel and the Avenues from 1905 into the 1950’s.

The original balconies were replaced by a brick and concrete verandah in 1929 and the ugly four-storey brick and stucco block was added in the 1950’s.

The building built of facebrick with an iron roof is rectangular in plan with an apse at the east end and an entrance vestibule flanked by two anterooms at the west end. As the Jewish Community declined in Zimbabwe the building was sold and Tattersall’s moved in and enlarged the betting hall, but in the process destroyed the original spatial integrity of the building. In time, they moved on and today the building is occupied by a Funeral business. 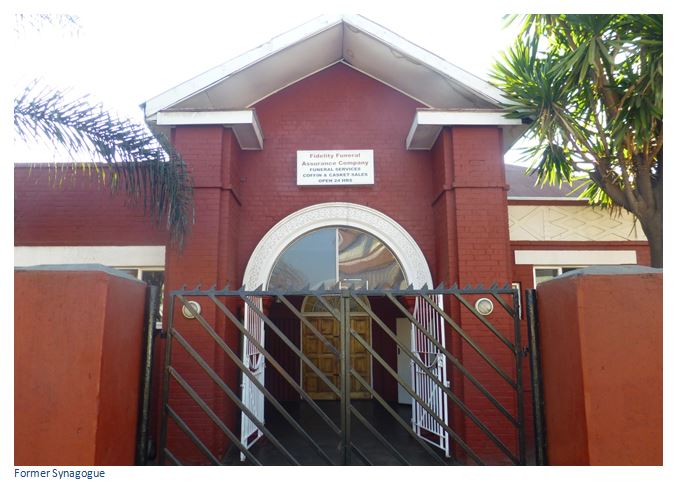 Despite the negative impact of the changes, the former synagogue remains an important building. The entrance arch seen above has an interlocking geometric pattern. The elaborate glazed timber doors remain, but the sunburst fanlight has been replaced by clear glass. The ceilings are pressed metal supported on four masonry columns and the original timber floor has been replaced. 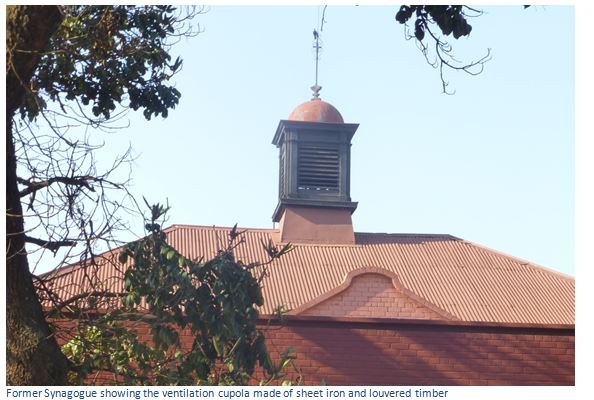 Nevertheless the exterior has been kept in good order and the building has a very neat appearance in its red paint with the detailing picked out in white paint.

The Guild Hall was built four years after the former Synagogue but the two buildings occupy adjoining stands (1526-7 and 1515) and both are long low rectangular buildings built in facebrick. Tattersall’s have moved out of both buildings that are now occupied by the same Funeral business. 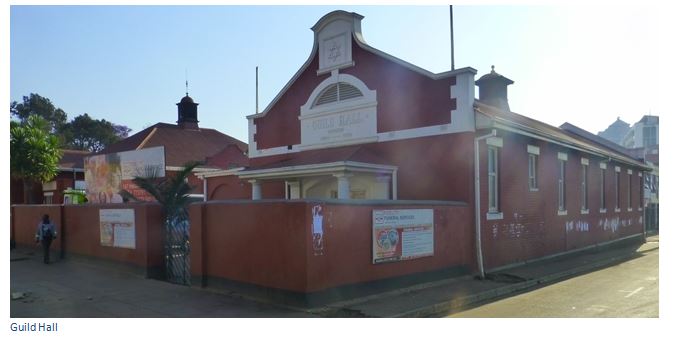 The gable on the west has a Star of David with below an arched louvered ventilator and a panel inscribed GUILD HALL ERECTED 5680 – 1920” the dates referring to the Hebrew and Roman Calendars. Below the entrance portico has a corrugated iron portico supported by two round and two square columns.

Internally the pressed metal ceilings and floors of imported timber are still intact as are the timber window frames. The brick arched verandah on the north side facing into the courtyard was added in 1925 by F.A. Jaffray. The double-pitched corrugated iron roof contains an attractive timber and iron louvered cupola to ventilate the roof space.

The Guild Hall and former Synagogue are both painted in the same red colour, and together with the courtyard form an attractive and coherent piece of architecture in the midst of a scruffy and run-down neighbourhood.

Isaac McCullagh and Samuel Bothwell started their partnership in Kimberley in 1893 as “Men’s and Boy’s Complete Outfitters and Boot Merchants.” They bought the current stand in 1902 for £850 and sub-divided stand 1969 into three portions; selling one to the Bank of Africa and one to Charles Duly for a cycle shop.

Their shop has an ornate façade with a very simple and the double-pitched corrugated iron roof is well hidden. The pavement canopy is supported on four high cast iron columns with ornate decoration and decorative filigree brackets typical of the time.

Most of the original building remains; including the original timber framed shop fronts, although the front door with brass fittings has gone, as has the lantern light projecting above the apex of the roof…this has been replaced by strip lighting.

McCullagh and Bothwell occupied the shop until 1912 when they sold the shop. It was bought in 1942 by Mithal Vasan whose descendants still own the building today and sell shoes from China. 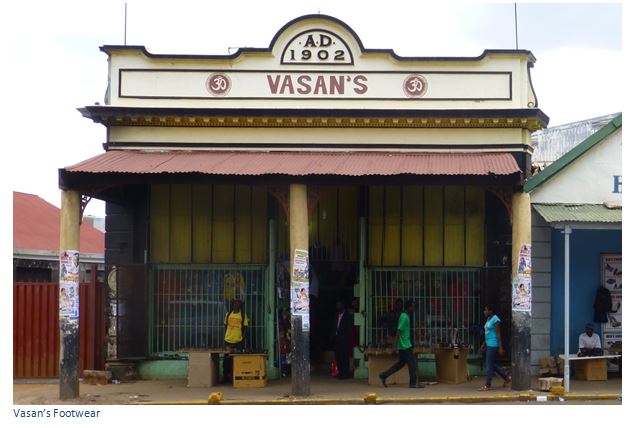 In 1898, the then Mayor and first resident director of the Argus Publishing Company, William Fairbridge, had his printing presses in the adjacent corner building producing the Rhodesia Herald. Originally called Herald House, the present India building housed the 15 horsepower Crossley Engines used to power the printing presses that ran next door. Substantial walls were built to withstand the vibrations of the new machinery.

Internally India House has been altered considerably over the years and has few remaining original features. It was later used by Ali Adam & Company for fifty years as a clothing factory, in the 1950’s it was named for the India High Commission, which had its offices here.

The building is Victorian neo-classical and was a very popular style for commercial buildings in the late nineteenth and early twentieth century. The first floor has five pedimented timber-framed casement windows with circular pediments over the three centre windows and triangular pediments over the end windows, between each window are pairs of Ionic headed pilasters. The first floor windowsills are joined to create a stringcourse separating the floors. 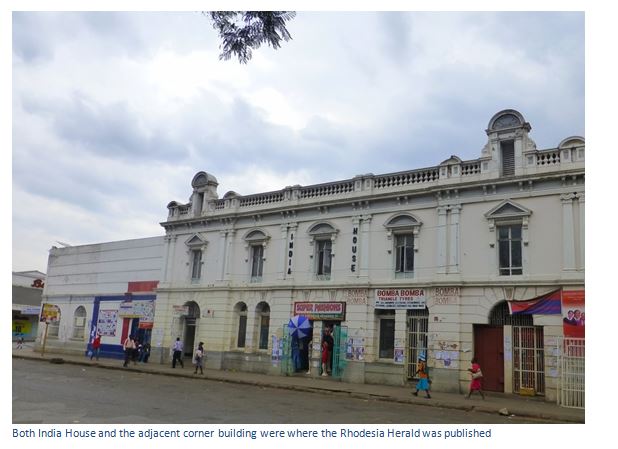 On the ground floor in the centre were three pairs of tall rounded windows, only the left one remains unaltered, with larger openings at the ends, which have both been altered, and the original doors removed. The balustraded parapet conceals a corrugated iron roof and rests on a projecting cornice supported on corbelled brackets. The raised pediments contain a decorative oyster shell relief and a very similar to the features in Berea House, in Fife Avenue that Le Roux designed for himself. 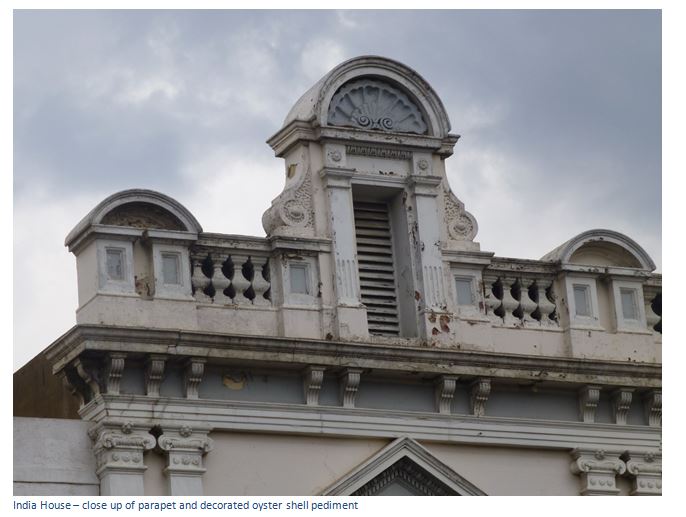