National Monument No.:
16
Why Visit?:
How to get here:

Leave Harare on the Borrowdale Road, distances are from Borrowdale police station, 13.4 KM the road crosses a grid and enters the Chinamora Communal Lands, 16.3 KM turn right at the signpost to Domboshava National Monument on to the gravel road. The rock face and scared forest are visible ahead; 17.2 KM reach the Interpretive Centre car park.

The Monument came under the custodianship of National Museums and Monuments of Zimbabwe in 1936. The Site is a short drive from Harare and has spectacular granite geological formations and a cave with late Stone-Age rock paintings.  Major attractions include an Interpretive Centre, dusty rural landscapes, the rock art panels, sacred forests and wooded vegetation. The name is derived from dombo meaning "hill" and shava (pronounced shawa) meaning "red", literally translated as ‘the red rock.’ Probably the red and yellow lichens are where Domboshava derived its name. 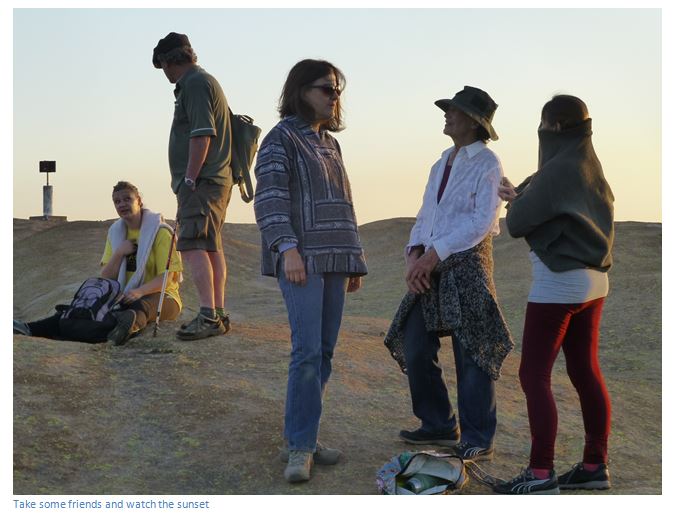 Remember that lightning strikes are very frequent in this area during the rainy season, so avoid walking when it looks like rain and even sheltering under a rocky overhang may be hazardous.

From the Interpretative Centre visitors face up Domboshava visitors have a number of options:

(1)    If they just want to get to the cave and see the rock art there is a well-marked footpath with painted arrows on the bare granite that skirts to the left of the rock pools and crosses the lowest point of the granite whaleback directly ahead and to the left of the summit and trig point. The path then gradually descends towards the cave that appears as a horizontal slit densely covered with shrubs and trees on the eastern side of Domboshava. This route is about 800 metres and is easily negotiated by small children with a helping hand over the occasional rock obstacle. Many visitors will then choose the return by the same route.

(2)    The route marked in blue takes visitors up the telephone tower with good views towards Harare from the top and back via brachystegia woodland to re-join the footpath.

(3)    The route marked in green goes around and above the cave and past the tunnel exit from where smoke issued when the wind was coming from the east and might bring rain. Visitors walk steadily uphill to the trig point at the summit to watch the sunset and enjoy the refreshing breezes, before returning down the west side of Domboshava and then turning north to meet the footpath as it descends.

(4)    The longest route is around 4.5 KM and goes south before passing below the summit and along an edge before crossing a valley and ascending up a whaleback. The unmarked route follows the summit of the granite before turning north and ascending steadily to a streambed, then up onto Domboshava Hill following the east side and either turning left to the summit or continuing on the cave and returning on the marked footpath.

The rough surface of the bare granite makes negotiating quite steep ascents and descents quite easy providing visitors are in track shoes, or good hiking shoes. 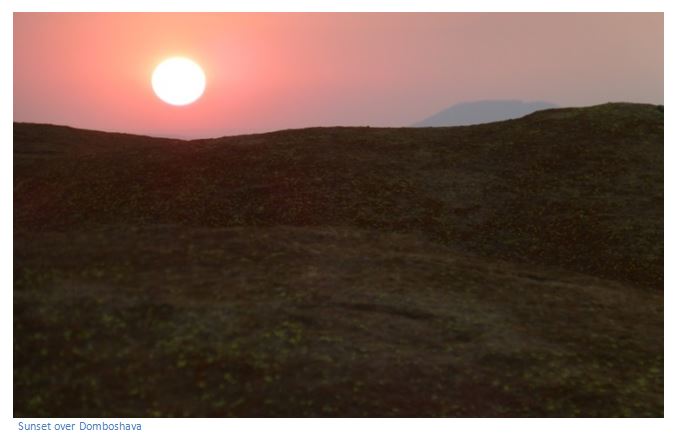 Seekers of rain, who made the pilgrimage to Domboshava in time of drought, came to the sacred cave bearing offerings to the Rain Spirit. During periods of drought these ceremonies are of ritual importance to the local Shona communities. The offerings were laid in the cave and a fire was lighted within, the resulting black residue of soot can be seen today on the granite surrounds of the tunnel. There is a natural tunnel which comes out the side of the hill like a chimney.  The pilgrims squatted down upon the hillside to await an answer from the spirit. Sometimes they had to wait a very long time before the Spirit accepted the offerings and signified that rain would come. The promise of rain was shown by an issue of smoke from the top of the hill. Sometimes the Rain Spirit ignored the offerings of the pilgrims, who had to make further pilgrimage bearing gifts, to appease the spirit and elicit the rain-promise.

The physical explanation of the phenomenon is that at the back of the cave at Domboshava there is a crack which leads through the granite to the top of the hill. When a rain wind was blowing, its action would carry the smoke of a fire in the cave up the chimney crack and smoke would be seen to drift up from the bald dome of Domboshava. When the wind was unpropitious, no smoke would issue from the chimney and further attempts to gain the favour of the Rain Spirit would seem necessary. 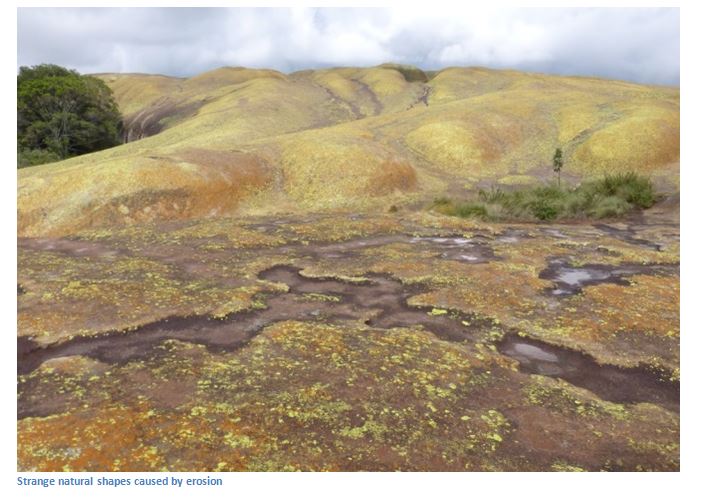 The rock paintings are found on the left side of the same shelter, they have been partially vandalized and have become very faint, but the trance scene painting by Elizabeth Goodall that features these dancers in a line with attenuated legs and elaborate headdresses is still just visible; there are other small shelters with faded paintings, so look out for them. 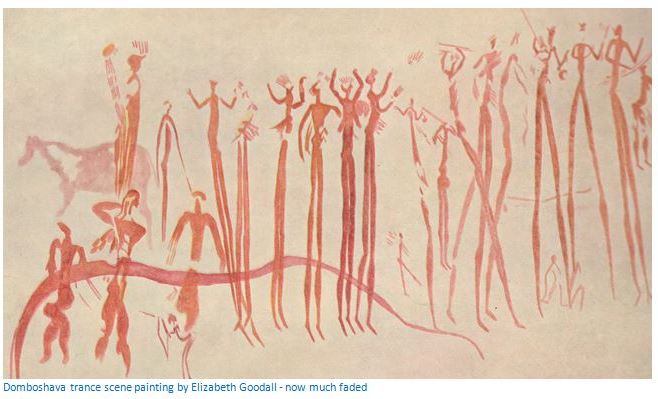 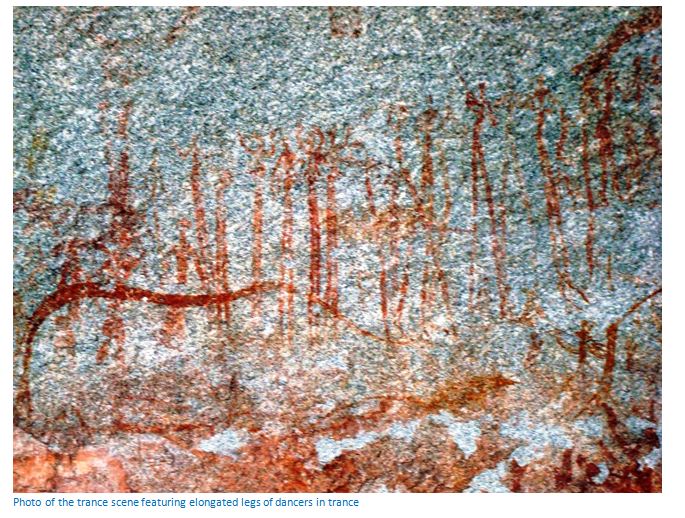 There are several rock formations at the top of the hill which have been formed by natural erosion and the hill and rocks are covered with red, yellow and grey lichens. The Rambukurimwa forest meaning “cannot be tilled” at the base of the hill and to the left of the entrance is mostly of Muzhanje trees (Uapaca kirkiana) which are considered sacred, so the local community will not cut firewood here, although the fruit is popular. 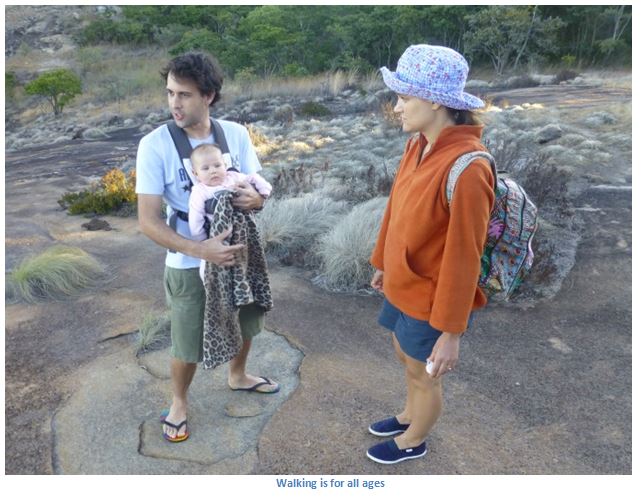 On the Harare side of Domboshava (i.e. south) is a low hill covered in a jumble of boulders. This is Chavaroyi whose local meaning is “for witches” and in times past, those thought to be witches were made to run around the hill before washing in a nearby sacred stream to cleanse them of witchcraft.

The excellent Interpretive Centre acts as a source of historical and ecological information, giving information on the history of the site, erosion, farming and conservation and the Archaeology and Monuments Department works with local schools and leaders in preserving the site and other awareness programmes.

There are picnic shelters, braai stands and ablution facilities provided, but take your own firewood and loo paper. 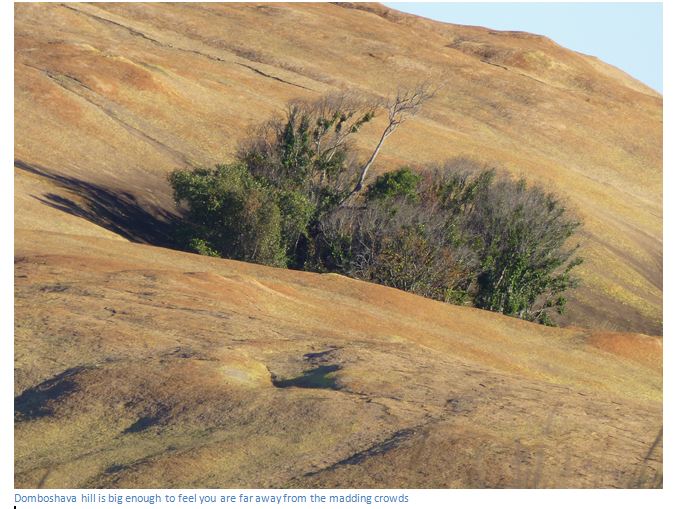 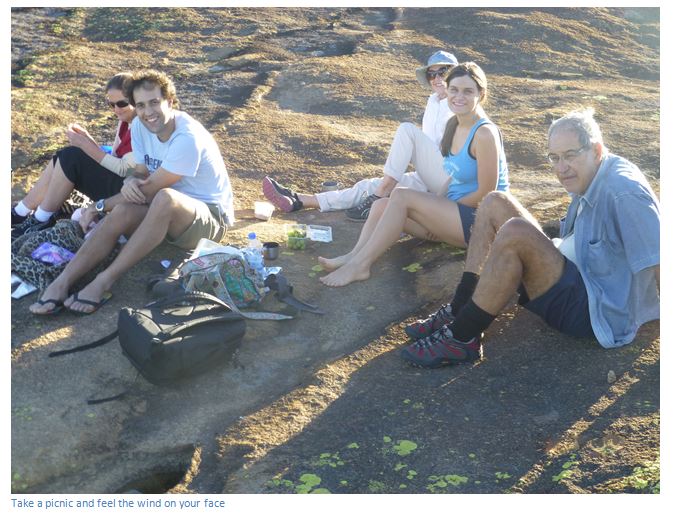 When to visit:
All year around Monday to Sunday 6am to 6pm
Fee:
An entrance fee is chargeable
Category:
Scenic
Cultural
Rock Art
Province:
Harare