National Monument No.:
47
Why Visit?:

The Jesuit Fathers reached old Bulawayo early in September, 1879, and were received by Lobengula, eventually obtaining permission to stay in the country and establish a Mission. A Greek trader, Mr. Griete had established a store and trading post on this spot. On 26 November 1879, he sold his store and house to Father Prestage and the Jesuits for £500, a lot of money in those days, for the purpose of founding a mission.

The roofless stone buildings are still fairly intact and are the oldest remains of a European built house in Zimbabwe. Their builders, the Jesuit Fathers Depelchin and Croonenberghs, lived here and entertained Lobengula to tea in the centre room of this little cottage.

4.5 KM turn right off the narrow tar onto the gravelled Criterion Road, at 11 KM National Monuments sign indicates Old Bulawayo on the east and the Indaba Tree on the west. At 11.5KM park your car for the Jesuit Mission, short walk of 0.5KM to the site of the Jesuit Mission

In 1879 the Jesuits made arrangements to establish missions to the north of the Limpopo River and in the Zambezi river valley. The head of the mission was Father Depelchin, a Belgian who had already spent eighteen years in India. He took with him a ten other priests from Belgium, Italy, England and Germany.  They made three successive expeditions between 1879 and 1882, beginning in the coastal town of Grahamstown, in the Cape Colony, and involved hundreds of kilometres by ox-waggon through difficult country taking six months. The goal was always the same – to ask the local people for permission to open a mission station in their land, but each time, they refused. Depelchin wrote about their misfortunes, trials, diseases and accidents in his letters sent "from the lands of the Matabeles," in the huts of the Batongas" and from "the valley of the Barotses," which were published in Brussels as a two-volume set in 1882 and 1883 under the title of Trois ans dans l'Afrique australe [Three Years in Southern Africa] 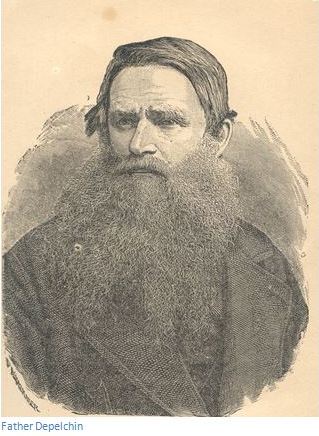 On the 6th September 1879 Fathers Depelchin and Law accompanied by James Fairbairn meet Lobengula at his royal kraal at Ishoshani, or White Rocks. After presenting their gifts, they returned two days later. They told Lobengula they would be happy to live as missionaries amongst his people and to have a mission station at koBulawayo and another at Tati.  Lobengula replied through Fairbairn that he had enough of abafundisi, that is teachers and missionaries and that for 20 years the Protestant missionaries had worked in his country without success.  “They have attained nothing” he said, “absolutely nothing; the children don’t want to learn and the grown-ups are quite happy to be as they are.”

Father Croonenberghs also notes in his diaries that on the 7th November they moved on to the royal kraal at koBulawayo, (which they call Gu-Bulawayo) although Fathers Depelchin and law and Brothers Nigg and Hedley remain behind for a few days at Ishoshani to repair the King’s wagon. Father Croonenberghs says the trader Martin treats him like a spoilt son, and that from his house built on the top of Lion’s head, a local hill, over koBulawayo and its hundreds of huts.

Finally, Lobengula gave the Jesuits permission to stay and buy Greite’s house and land from the English trader Grant. He has also given permission for the Jesuits to mount an expedition to the Zambesi River in the following year after the rains have gone.

They bought Greite’s house on present-day Sauerdale. Father Croonenberghs S.J. wrote in his diary: "We have just bought for £500 sterling, an excellent house: it is one of the best in Gubuluwayo, though, to tell the truth, that is not saying much. Our enclosure, fenced with hedges, contains a large one-storey cottage, constructed in stone, like the small farm houses in the district of Namur; there are also some sheds and stables made of wood and pise; in addition there is a large store made of sheet iron. We propose to turn this into a chapel: it could hold 200 people with case. We also have a garden and poultry yard." 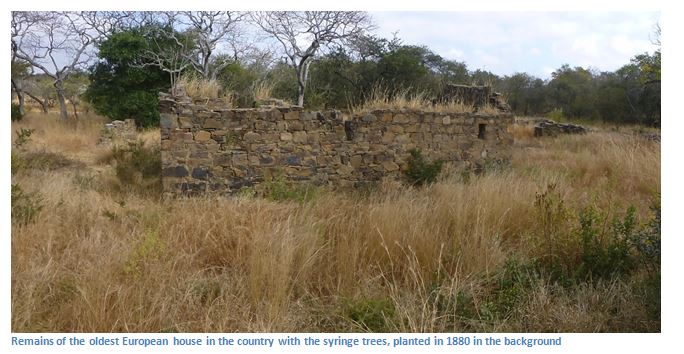 Adjacent is a small graveyard where there are two graves. One of these is that of Father Bartholomew Kroot, S.J., who arrived at the Mission on May 10, 1885, and died there from cancer on June 21 of the same year, at the age of thirty-eight. The other grave is that of a native leper who converted to Catholicism.

In August-September, 1881, Lobengula transferred his kraal to the present site of Government House, Bulawayo and all the buildings at koBulawayo, with the exception of those belonging to the Catholics, were destroyed, including “the King’s palace, the Queen’s huts, all the buildings in the royal kraal, sheds, coach houses, stables, and even old King Mosilikatsi’s waggon. ” 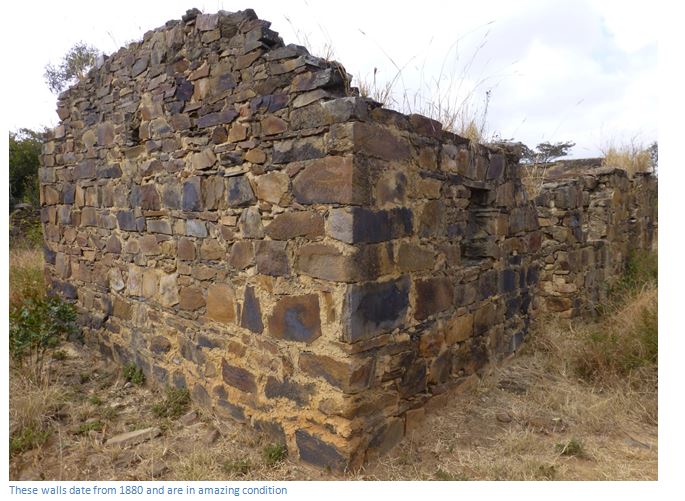 Within the Mission grounds there are the remains of the trees Father Croonenberghs planted in 1880. Seven white syringe, (Kirkia acuminate) one lucky-bean tree, (Erythrina latissima) and two small velvet-leaved corkwoods, (Commiphora mollis) and possibly a syringe-berry (Melia azadarach)

Near here at the royal kraal was held the Inxwala or first fruits ceremony in 1880. The Great Dance was held annually just before the raiding season when the Ndebele Regiments would be sent on their expeditions of plunder. Father Croonenberghs drew this scene and his first sketch is in the National Archives with Lobengula’s brick house in the background. 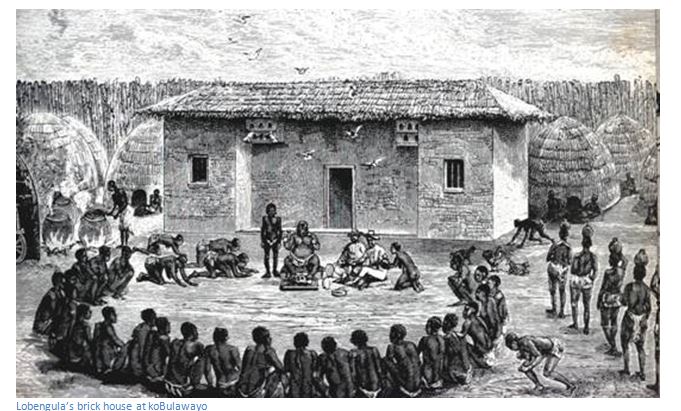 The Jesuits struggled on, but made no headway in terms of their aim of bringing the Christian faith to Lobengula's people.  In 1886, Father Prestage eventually persuaded Lobengula to allow him to start a school at Empandeni, but the new superior, Father Alfred Weld, decided that a period of consolidation was called for, and ordered the withdrawal of all Jesuits from Matabeleland.  Father Prestage accordingly withdrew, but he begged Father Weld to allow him to return, to which he finally agreed.

In 1887, Fathers Prestage and Andrew Hartmann built up Empandeni and classes began in the school.  But the signing of the Rudd Concession soured relations between Lobengula and the Europeans, and the Jesuits felt they had to withdraw for a time, leaving a caretaker in charge of the mission.

1890 was the year when Rhodes’ expeditionary invasion, also known as the Pioneer Column, came to claim the land between the Zambezi and the Limpopo. His claim was based on a flimsy agreement with Lobengula, which Rhodes interpreted liberally. In 1892, the first mission in Mashonaland was founded at Chishawasha, near Harare.

Empandeni, south of Plumtree, is the oldest school still existing in Zimbabwe to this day, though no longer run by the Jesuits.

Diaries of the Jesuit Missionaries at Bulawayo 1879 – 1881. Rhodesiana Society publication No. 4.

When to visit:
All year around Monday to Sunday 8:30am to 4:30pm
Fee:
An entrance fee is chargeable
Category:
Cultural
Building
Province:
Bulawayo