The The Museum’s collections relate to:

From the entrance turn right for the Geology exhibits which were established by F.P. Mennell (1880 – 1966) the first Curator and author of over a hundred scientific papers and five books. The exhibits begin with minerals and their identification and include typical pitfalls for prospectors. Then follows an A to Z of minerals starting with aluminium and arsenic; minerals found in Zimbabwe include alluvial chrysoberyl, topaz and ruby from Somabhula, amethyst from Hwange, garnet from Pfungwe and Beitbridge, emeralds from Mberengwa and Filabusi, beryl from Mwami and chrome chalcedony (mtorolite) from Mutoroshanga.

The origin of rocks is explored and their classifications into igneous, sedimentary and metamorphic. There is a slice of orbicular granite from one of the few sites in the world on the edge of the Matobo and examples of Stromalites from Huntsman quarry north of Bulawayo which is 3,000 million years old and amongst the earliest forms of life on earth.

The cross-section of a gold-mine is supplemented by displays of early gold-mining equipment, including lamps and theodolites for surveying, candle holders and test kits for mineral identification. Many early pioneers were involved in prospecting for gold and the display reminds potential prospectors that the granites which cover much of the country are devoid of ore deposits; but schist’s and gneisses on the edge of the granite areas often contain gold, copper, tin and tungsten and the serpentine formations often have chrome, asbestos and nickel. 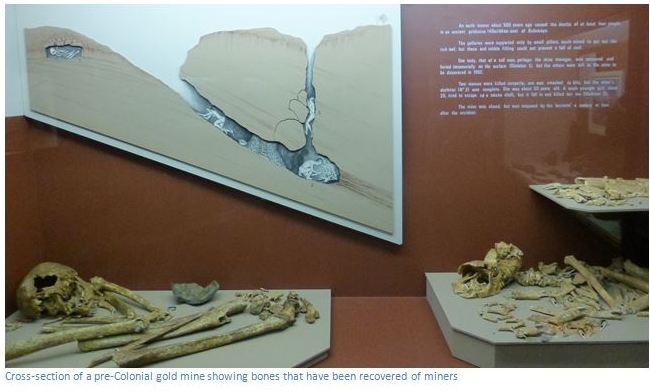 A life-size reconstruction of the inside of a gold-mine shows miners involved in rock-drilling, the cocopans carrying ore to the surface and the air and water pipes required for drilling and blasting. A diorama of minerals found in Zimbabwe features the skull of artisanal miner found at Umkondo mine which has been stained green from long exposure to copper ore; copper ingots were used as a form of early currency.

Reptiles are represented with live specimens of the puff adder, gaboon viper and southern file snakes which are scarcely recognizable in their enclosures so superb are their camouflage. Above are wall mounted specimens of the long horned ox from Barotseland and a rhino; nearby a dugong, that strange sea creature which supposedly lured sailors and their ships onto the rocks, a python stretches out on the floor. A very rare coelacanth is displayed; with a lineage of nearly 400 million years, it is a 100 million years older than the dinosaurs.

The Captain Cecil Damen Priest Gallery is a must for any visitors interested in birdlife. Fully half of the remaining ground floor is given to dioramas that exhibit mounted specimens of birds, mammals and large animals in their natural environment; the painted backdrops are very realistically painted and far superior to any other Museum. Birds flock around a naturalistic looking pan, vultures and marabou storks on a carcass, a pangolin, aardvark and aardwolf eat insects, dassies in their Matobo rocky hideouts watch for the hovering black eagle. In the larger mammal displays hippo jostle for space in a secluded pool, a wildebeest watches for predators, sable antelope, an eland and kudu browse together. In the walk-through diorama which pulsates with sounds of the bush, a pride of lion feast on their kill and buffalo, giraffe, warthog and smaller antelope share the space with the Doddieburn elephant, the second largest elephant ever mounted which stood 3.52 metres (eleven feet seven inches) and weighed 5.5 tonnes. 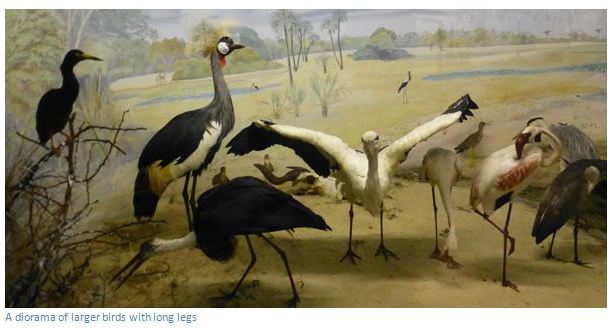 The first floor begins with the story of mankind in Zimbabwe starting with early man as a social being and tool maker and exhibits large early tools from the Sangoan period 250,000 years ago and the finer points and scrapers from the Magosian period 100,000 years ago. Various displays examine the themes of art in society, African music, ancient gold workings including a cross-section of a shaft and the skeletons of miners crushed in rock falls, the Portuguese arriving at Sofala in 1505 and the development of the long distance trade.  Zimbabwe gold has been exported for at least 2,000 years through Swahili traders up the east coast of Africa to India, China and Europe. In 1825 Robert Moffat and the missionaries settled in Kuruman: then in Zimbabwe with Thomas Morgan Thomas, Sykes and David Carnegie at Hope Fountain and Father Prestage. The role of the Nganga and his divining bones within traditional society is examined, then Ndebele Society and the Ndebele (or Matabele) warrior.  There is a display of part of the Robert Codrington knives collection and a comprehensive display of traditional basket wares, pottery and domestic utensils.

The nineteenth Century history of Zimbabwe is examined in detail with the BSA Company which through its Royal Charter governed modern day Zimbabwe from 1890 to 1923 running the law courts and post offices through its own police force the BSAP and granting mining licences and farm land. The role of transport in the development of Zimbabwe is examined including Mangwe Pass, the railways, Odzi Bridge built in 1899 and Victoria Falls Bridge in 1905; the contractors responsible Sir Charles Metcalf and George Pauling and a fine example of the Zeederberg coach is displayed along with the gun carriage used to carry Rhodes’ coffin to his grave-site in the Matobo. The different mediums of currency exchange are displayed from ancient copper ingots to trade beads, bangles and cowrie shells to early twentieth Century notes and coins. 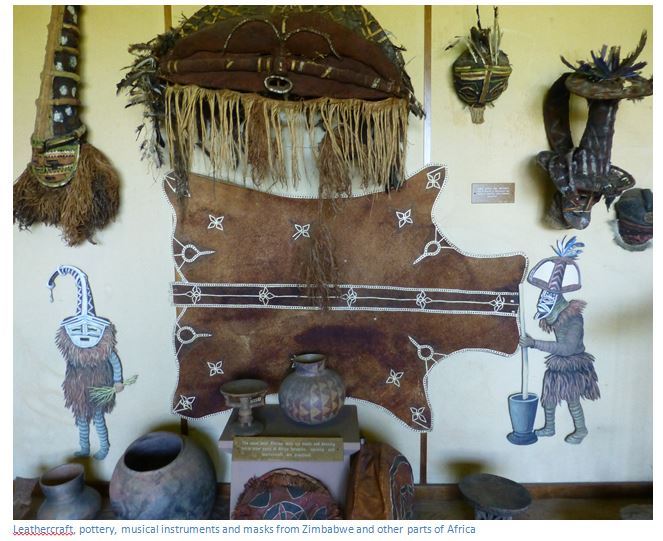 The Hall of Kings features Mzilikazi and Lobengula who ruled the Ndebele people in Matabeland in the nineteenth Century. Throughout these galleries most of the forty-two panels from the National Tapestry are exhibited; these were stitched by members of the Women’s Institutes from 1946 and portray events from the country’s history. The final tapestry made from over five million stitches was presented to Parliament in 1963.

The Hall of Invertebrates shows off part of the Museum’s collection of insects and other invertebrates in well-lit, mounted displays that are extremely artistically presented…the very opposite of the boring and stuffy displays that were the norm in the past and both children and adults will find them fascinating… the very essence of a good Museum, an achievement which the Natural History Museum of Zimbabwe accomplishes with ease.

When to visit:
Open daily and Public Holidays (except Christmas Day and Good Friday) from 9am - 5pm
Fee:
An entrance fee is chargeable
Category:
Cultural
Geological
Historic
Province:
Bulawayo