National Monument No.:
6
Why Visit?:
How to get here:

The site covers 35 hectares, so it is worth taking a picnic and spending half a day exploring the site.

Great Zimbabwe between 1300 to 1500AD was the largest settlement in sub-Saharan Africa, its wealth founded on the cattle and gold trade down the Sabi River with Swahili merchants based around Sofala on the African east coast. At Zimbabwe the art of dry-stone walling was learned and although there are regional and historical differences, over 300 dry stone sites developed, and are given the name madzimbahwe “houses of stone.”

In the late 1400’s land exhaustion and succession disputes weakened the ruling elite at Great Zimbabwe which split into two successor states. One under Mutota Chibatamatosi went north and founded the Mutapa State in northern Mashonaland; the other went westwards and founded the Torwa State at Khame.

The principal features of this architectural style are in the walling, which is no longer free-standing as at Great Zimbabwe, but a series of stone walls which are in-filled to create levelled platforms, or terraces.  In addition the walls have simple geometric designs built into them, the most important at Danan’ombe (formerly Dhlo-Dhlo) Nalatale, Zinjanja (formerly Regina) and of course Khame. The Torwa Dynasty was centred at Khame and flourished between 1450 and 1683. The Portuguese established a fortress at Sofala in 1505 and partially destroyed the Arab-Swahili trade system that had dominated the coast. Its elite, dominated by the Chibundule Dynasty whose leader was known as Mambo, controlled the rich grazing lands and gold, copper and salt mines of Matabeleland and adjacent Botswana. The gold trade, although diminished, still existed and it is likely that the wealth of the Torwa attracted the envy of others. On Old Portuguese maps the Torwa Empire is always referred to as Butua.

About 1644 a family feud saw competing claimants for the throne and a crippling civil war erupted. The legitimate Mambo was overthrown and the deposed leader fought back with help from a Portuguese landowner / mercenary from Mozambique. Khame was attacked and some parts seem to have been burnt. Political power now slipped to the northeast where the Rozwi State would ultimately be founded, as Khame sunk into a provincial backwater. The Rozwi most likely came from the Mutoko area in north-eastern Zimbabwe and were led by Changamire who raided the south-east sacking Khame in 1683 and destroyed the Torwa dynasty. The Rozwi Kingdom took over those areas previously held by the Torwa, including southeast Zimbabwe, eastern Botswana and northern South Africa. It continued the stone-building culture that it had inherited and resumed trade through the Portuguese, who knew it as Butua, but over time the Kingdom was weakened by a succession of disputes and droughts, until in 1838 it was overthrown by the Ndebele under Mzilikazi. 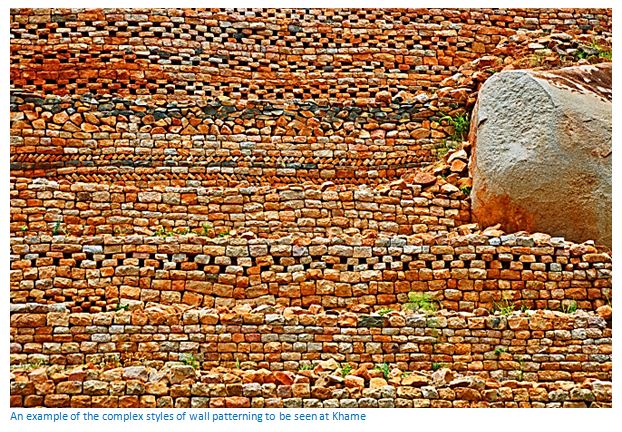 The Main Platform, or Hill Ruin are generally the first to be visited; these were the royal residences of the Rozvi Mambo. These terraces, many profusely decorated, create stepped platforms on which the ruling elite lived out their lives. Their actual houses were built of clay, poles and thatch. There are three artificially built platforms lying like giant steps, one above the other.  Immense labour was undertaken in carrying gravel from the valley in baskets or pots to infill the retaining walls for hut platforms and there is evidence that the platforms were enlarged and heightened on a number of occasions. Below the platforms were the huts and courtyards of most of Khame’s estimated population of 7,000 with the royal residence of the Mambo on the uppermost platform. Hundreds of house compounds filled the open valley where the current site museum stands. They were the craftsmen, the ritual specialists and the military men who worked for the ruling elite. The niches on the main passageway indicate that it was probably once roofed. 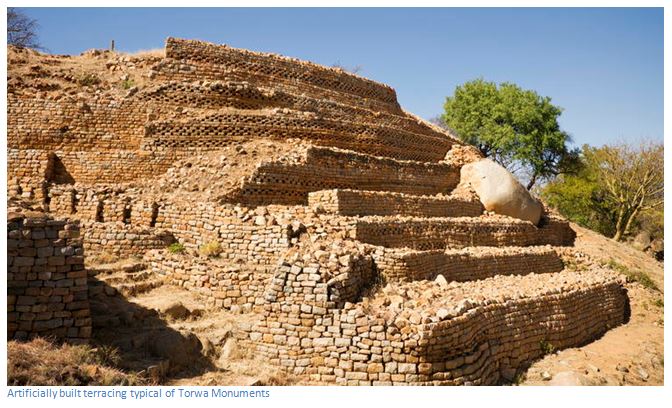 Remains of hut walls and floors can be seen on the platform area, the largest probably the Mambo’s audience chamber with the royal court. Here was found the zoomorphic pot which the Mambo may have used for requesting guidance from his ancestors and is now housed in the Site Museum.  Adjacent are the remains of a stone-lined covered passage leading to the Mambo’s home, where at least twelve iron and eight bronze spearheads, two carved ivory lions and five ivory diving dice were excavated, plus imported porcelain, further indications of a royal presence. 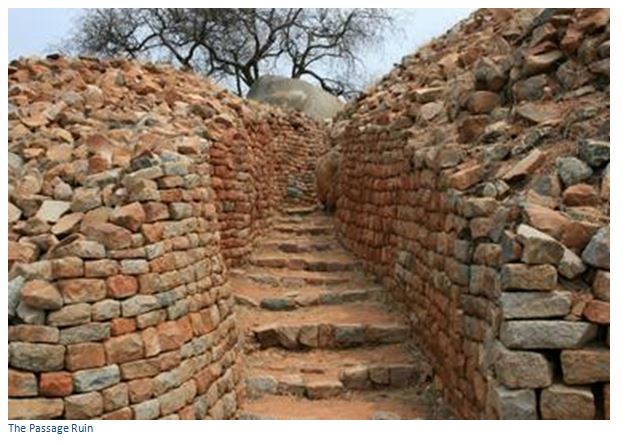 Note all the wall stones in the covered passage have been cracked by heat. This is evidence of a destruction period when in all probability the passage roof was pushed in, the passage filled with brushwood and set alight. The prevailing south east wind blowing up the nearly ten metre high passage would have created ideal condition to generate enormous heat.

The passage widens out to a semi-circular chamber called the “sunken house.” This was roofed and excavations unearthed highly decorated pottery and a beautiful beaker which was undoubtedly a beer container, many post holes in the floor furnished evidence for a substantial roof. The stone work forming the inside walls was completely covered with mud plaster which continued over the top of the ledge which can be seen about four feet six inches above the floor. On this ledge were found the charred stumps of the roof timbers. If the visitor looks towards the top of the platform above, steps leading into mid-air may be seen. These must have led onto the flat roof of the passage and chamber.

Excavations on the steep slope leading to the river revealed broken pottery and glass, iron tools, small bits of ivory and gold and the remains of broken objects thrown off the hill. The lowest platform may have contained the homes of the more junior wives.

Near the Hill Ruin is the Cross Platform with a cross of stone laid out upon a great flat slab of rock on the summit. This was probably the residence of a senior figure in the ruling elite; a close advisor if not also relative to the Mambo. It was only after the platform ceased to be a residential area that the mysterious Dominican Cross was laid down made from loose blocks of granite. Its origins are obscure; it may be a victory symbol, marking the presence of the Portuguese mercenaries at the time of the town’s sacking in the 1644. Whatever the truth, the cross is widely respected, a spiritual site where some visitors remembering their ancestors and leave offerings. There are no records in the Portuguese chronicles of their presence so far to the west as Khame, but the Portuguese did participate in the civil war that destroyed the Khame site. The cross was cemented in position in 1938, the original stones being used.

Follow the trail east and then south along the river, a very pleasant spot in which to picnic. A short walk leads to the Vlei Platform. This little ruin is remarkable for the fact that it has free standing walls, the remains of two dhaka houses, which may have housed the lesser rulers and behind them are two enclosures which may have been cattle, or small stock kraals.

The Precipice Platform overlooks a wide stretch of water of the Khame Waterworks Dam, the decorated retaining wall is probably the most massive and the longest of its type in the country, being 75 metres long and over 6 metres in high, the three breaches in this wall may have been made by the raiders pushing over huts during the destruction period. The lack of archaeological finds here, plus the presence of a large rock gong, suggests this platform may have been used for community activities and festivities.

Further along the path is the Passage Platform which is roughly circular in plan with a passage leading between two artificially built platforms on which were built the huts of a complete family unit, having the living quarters on the platforms and the housing for domesticated animals behind them. Perhaps it was the residence of a minor royal or important official of the Butua State, although some academics suggest it was a later occupation reporting to the Rozwi capital of Danan’ombe near Gweru. Notice the Tsoro game board carved into the rock. Set amongst the trees, this is one of the prettiest parts of the site.

Across the main access road is another large platform, the Monolith Platform. Like the Vlei and Passage Platforms, this is probably another residence of a member of the ruling Torwa / Rozvi elite. 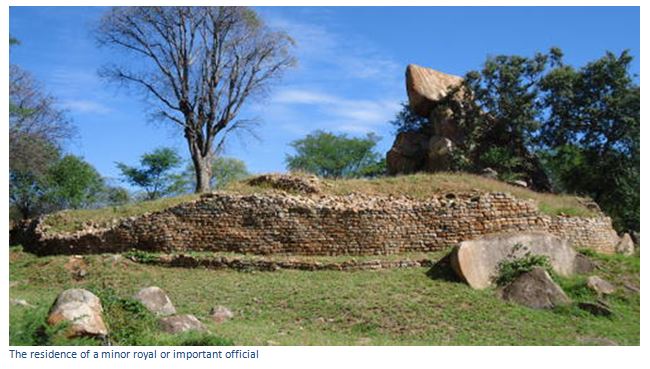 The pathways are well maintained, but there are many steps requiring a reasonable level of fitness. There is no cafeteria, but a large picnic area for a bring-your-own lunch. For a deeper understanding of Khame Ruins, visit the Museum of Natural History in Bulawayo which contains many of the artefacts found at the site.

If you have time take a walk along the path from the site museum and along the banks of the Khami River. The thick riverine vegetation provides luxurious shade in the heat of the day and is excellent for birding.

When to visit:
All year around
Fee:
An entrance fee is chargeable
Category:
Ruins
Cultural
Building
Province:
Bulawayo