The story of the Ndebele from when they are forced out from present-day South Africa by a coalition of Afrikaners, Griquas and Zulu to the establishment of modern-day Bulawayo can appear confusing.

During Mzilikazi’s reign as King there are four different capitals (Gibxhegu, Mahlokohloko, Inyathi and Mhlahlandleia) He was succeeded by Lobengula  who established a new Gibxhegu and then renames it koBulawayo (this is the where the Site Museum is situated) and finally Umhlabathini, or the second koBulawayo, the site of modern day State House. This was in keeping with tribal custom; the royal towns of Matabele kings were never intended to be permanent and whenever a King died, the capital moved and the old royal town was burned.

Below is a time line of the sequence of events, particularly in relation to the sites of the king’s kraal over the years: 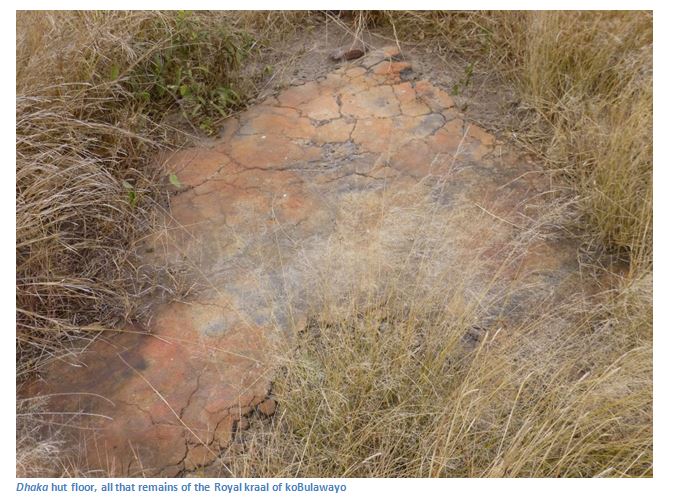 The AmaNdebele capital was about a mile in circumference, and was surrounded with a high and well-built palisade of wood. Inside, this palisade were situated the huts of the inhabitants, and near these was another strongly-built barricade similar to the outer one, but not so high, where the cattle were kept at night. A large inside space was reserved for a parade-ground, where great public ceremonies took place when the tribe was present in large numbers. Here was the royal hut, and another small kraal where the sacred goats were kept, and into which it was death for anyone to enter but the King without special permission. There were also here separate huts for each of Lobengula’s wives.  At the entrance to the kraal were two large heaps of horns and other refuse, the remains of bullocks which had been killed at different times and which in the hot weather sent up an odour that was long remembered by European visitors. Here would wait the soldiers, messengers, and others waiting to see the King.

In 1998 a number of structures such as a wagon shed, the outer palisade, King Lobengula’s palace, eight beehive huts and cattle kraal  surrounded by a palisade as well as a nearby interpretive centre were constructed. They were led by a team of experts from Zululand who visited the Zimbabwe to teach locals how to build beehive huts, characteristic of King Lobengula’s era.

Unfortunately in August 2010, a serious bush fire sweep through the site, destroying everything on the site except for the Interpretive Centre which survived unscathed. Even a hut built by the Khumalo’s to perform traditional rituals was not spared by the fire, as well as a stone laid by President Mugabe in 1993 to commission the reconstruction of the site. The Environmental Management Agency (EMA) fined National Museums and Monuments of Zimbabwe (NMMZ) US$500 fine for failing to put fireguards in place which resulted in the reconstructed  Old Bulawayo being burnt to ashes.

The original site established by King Lobengula was deliberately burnt down in 1881. One of the king’s indunas, Magwegwe, led the process of burning down the capital after which Lobengula and his people moved northwards to the site of the present-day State House in Sauerstown, Bulawayo.

The indaba tree where Lobengula held court at Gubuluwayo between 1870 and 1880 was a Pappen capensis, called uzagogwane by the Ndebele.  It was killed in the 1960’s by a strangler fig, Ficus burkei, which stands in its place today. 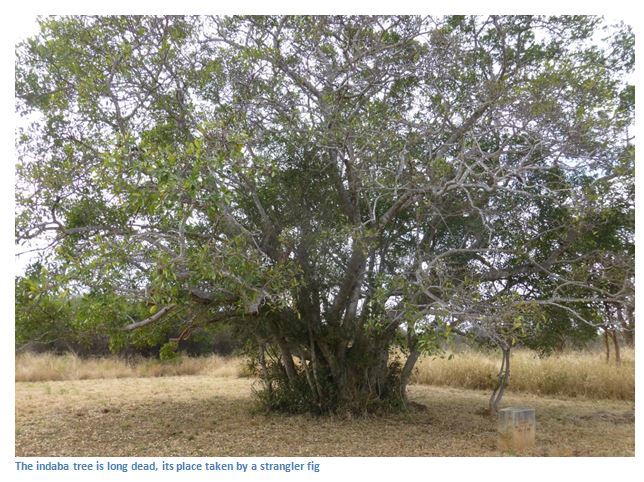 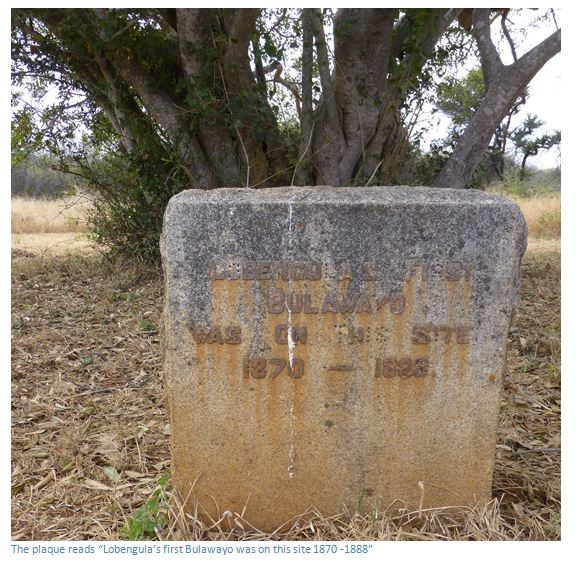 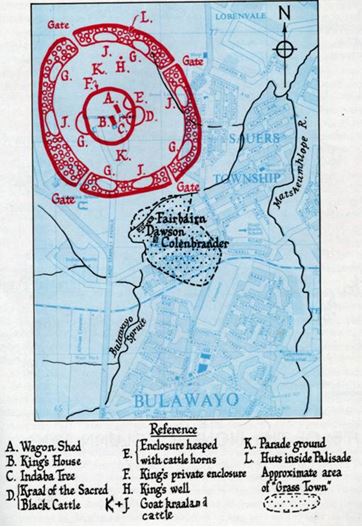 Outline of the kraal at Umhlabathini, or the second koBulawayo, drawn on a modern map

When to visit:
All year around Monday to Saturday 8:30am to 4:30pm
Fee:
An entrance fee is chargeable
Category:
Cultural
Historic
Province:
Bulawayo