These dinosaur trackways provide a fascinating insight into our geological past.

Visit with responsible experts who can provide interpretation and information such as the Geological Society of Zimbabwe, or NMMZ

From the Fossil forest site continue on the untarred road 22 Km to the Angwa River Bridge. Stop to see the potholes on the west side and the resident crocodile on the east side. 54 KM keep to the main road and after the Mkanga River bridge turn left for Zimbabwe National Parks and Wildlife Management’s Mkanga Field station. Check in here to book and pay National Parks entry fees.

These notes have their origin in the Field Excursion Guidebook prepared by Dr. Ali Ait-Kaci for a visit by the Geological Society of Zimbabwe to the South Chewore Safari Area from Saturday 23rd May to Monday 25th May 2015.

The Geological Society of Zimbabwe and guests stayed at African Hunters Mana Angwa camp in Chewore South Safari Area situated on the Angwa River in the lower Zambezi Valley at 16⁰13′45.93″S 30⁰05′47.26″E and operated by Adrian Read. These dinosaur footprint sites are seldom visited except by small parties of visitors in the company of an experienced and armed professional guide and ZPWA armed game scouts.

The process that resulted in the trackways being fossilised and preserved began with the deposit of fine-grained sands in fairly stationary inland waterways or swamps. The waters dried up leaving distinct ripple marks and desiccation cracks which are visible today and during this period the Allosaurus and Brachiosaurus dinosaurs walked over the drying mud and left their prints. The prints hardened rapidly in the intense heat of the late Jurassic / beginning of the Cretaceous period about 160 million years ago and mud filled in the prints. Further sedimentation took place over millions of years until recent times when river erosion exposed the original trackways.

Site 1 was discovered in 1984 by an Australian hunter and Tim Broderick, then of the Geological Survey of Zimbabwe on first inspection confirmed that the tracks emerge from the north bank of the Ntumbe River in a straight-line of 14 footprints before disappearing beneath the river bed sand. 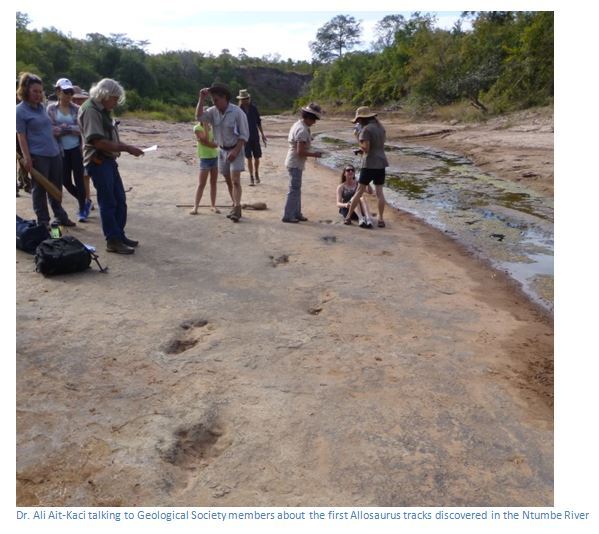 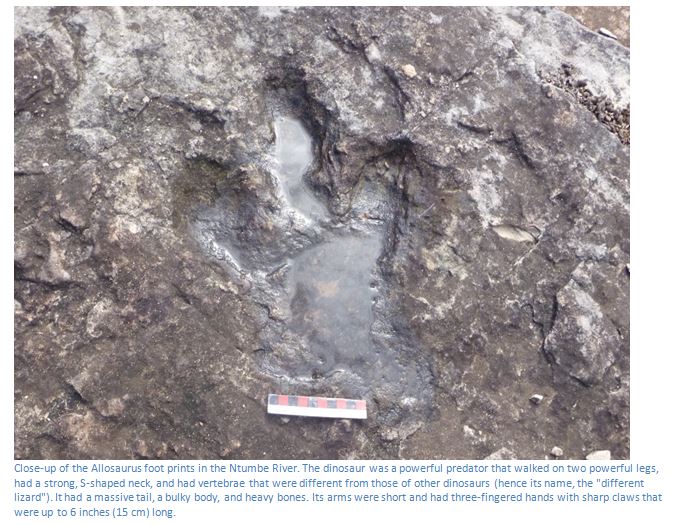 In 1990 an expedition sponsored by Operation Raleigh and the Geologists Association of London went in search of further dinosaur footprints and a further 31 were discovered when they excavated under the river sand. These footprints are believed to have been made by a large carnivorous dinosaur which walked on its back legs (bipedal) such as Allosaurus, an ancestor of the Tyrannosaurus rex as similar fossil bones were found by Mike Raath 50 KM away to the East in the Kadzi River. The Allosaurus footprints average about 40 cm with distinctive three digit claws and from these footprints it has been calculated they were about 12 metres long and 5 metres tall and weighed about 1,400 kg. There large skulls had brow-horns above the eyes and they would have been formidable hunters with powerful jaws and serrated teeth 5 to 10 cm long.

Site 2 was discovered by Dr. Ali Ait-Kaci, then of the Geological Survey of Zimbabwe and it was the first giant Sauropod footprint found in Sub-Saharan Africa. From its dimensions of 96 cm and absence of crescent-shaped characteristic of the front legs these are believed to be from the rear legs of Brachiosaurus, a plant eating dinosaur.  Sadly at least one of the five footprints here has been destroyed by elephants or floods in the stream bed in the last few years.

Site 3 lies in a shallow tributary of the Ntumbe River and at four close locations has at least eighty-eight  of the distinctive footprints of the Allosaurus along with the ripple marks and desiccation cracks which indicate periods of flowing fresh water and periods of drying. 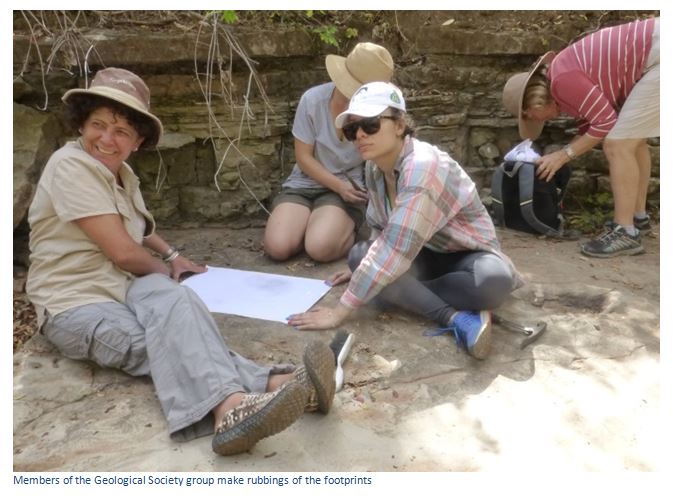 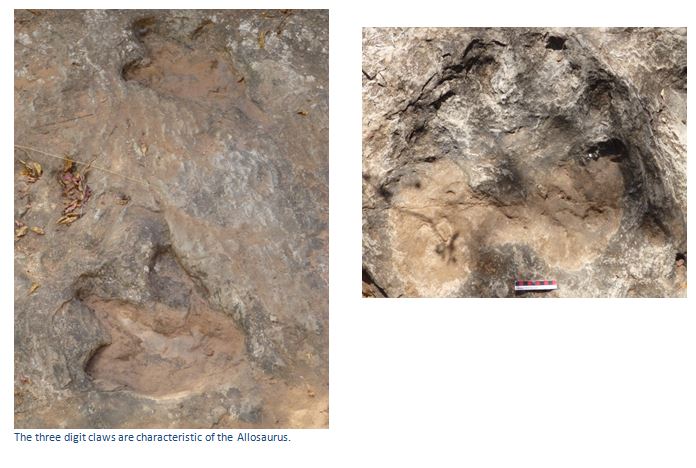 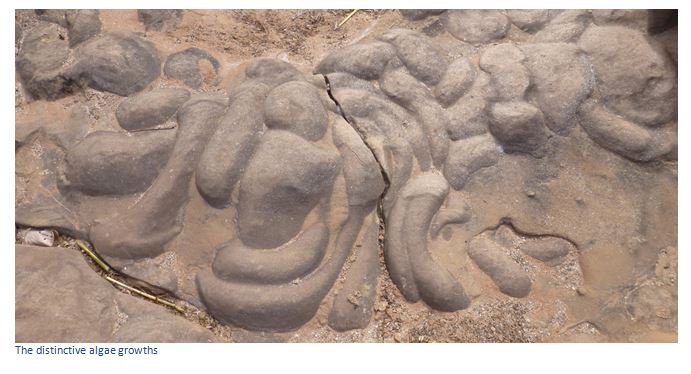 Site 5 and 6 have the remains of tiny clam shrimps called Concostrachans which are visible as black specks in the sandstones. They are known since the Devonian, about 400 million years ago and some species of this family still exist. Also within the same area and same Period are found fossil Lepidote fish and a good example of its black enamelled scales was found by one of our expedition members. 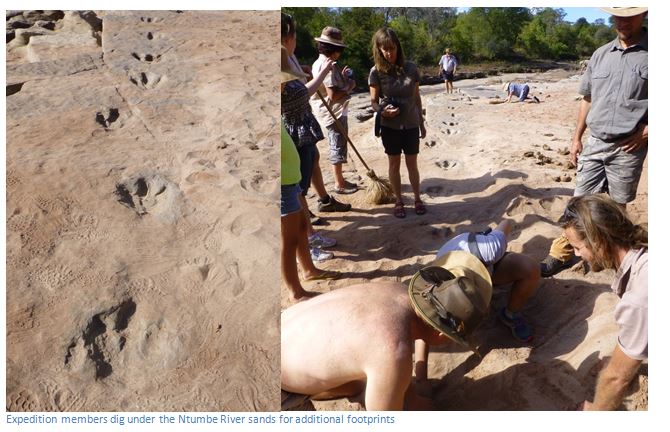 Site 8 is another Sauropod footprint site discovered by P. Broderick with seven or eight Brachiosaurus footprints;  some with the additional crescent shape which signifies front feet. 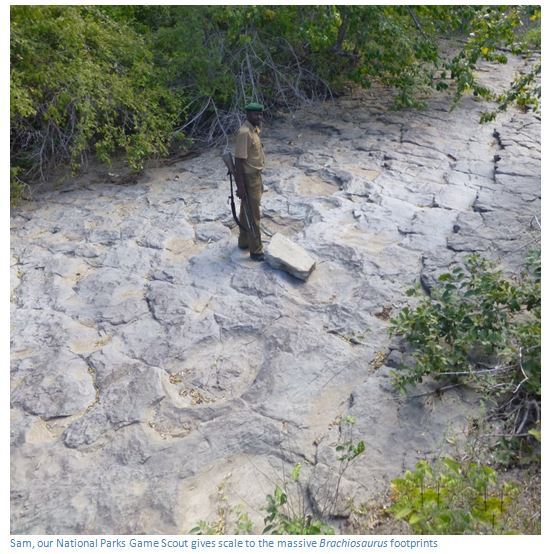 Site 9 is a small Massospondylus dinosaur skeleton part lying on its side in the pink and white Forest Sandstones on an island in the Angwa River. Many bones here have been washed away in the heavy seasonal floods, but the specimen remaining is at the top of a Forest Sandstone outcrop; its’ articulated joints folded and connected and preserved within the underlying sandstones. 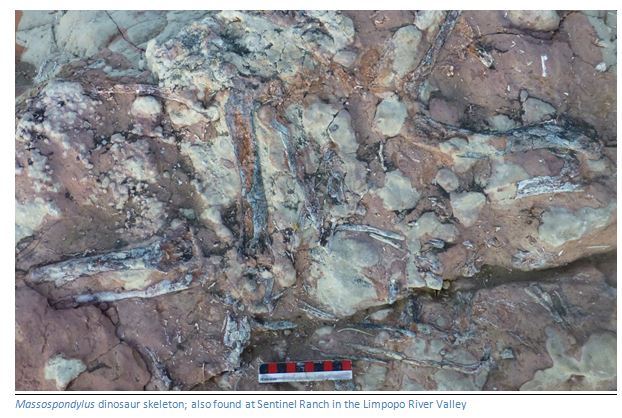 Allosaurus was probably a carnivore, the predecessor to the Tyrannosaurus Rex, and walked on two legs and had very distinctive tracks that are three-toed and clawed; in 1984 the first of several trackways with fourteen large footprints of dinosaurs in former muddy terrain was discovered by Mike Aldersey, an Australian hunter at the Ntumbe River area near in the Chewore Safari Area. Since then several other sets of tracks have been located by Tim Broderick of the Geological Department of the Natural History Museum with Professor Theagarten Lingham-Soliar and Zimbabwean geologist Dr. Ali Ait-Kaci. They include some of the best preserved dinosaur trackways in Africa and date between 145 to 170 million years ago and were formed in shallow-water deposits perhaps in a pan in the middle to Upper Jurassic. The moulds of their footprints are kept in the Paleontological collection at the Natural History Museum of Zimbabwe in Bulawayo and in the museum of the Geological Survey of Zimbabwe in Harare.

Even larger was Brachiosaurus, a very large plant eating dinosaur with a large body and long neck, as tall as 16 metres and weighing over ten tonnes, has been excavated only 50 km away near Kadzi River in the Dande Communal Lands in 1965; other specimens have also been found in Tanzania and the United States proving they were far-ranging.

Another Tim Broderick find was a series of tiny bird-like footprints no more than five centimetres long that Lingham-Soliar and Broderick decided was an infant Allosaurus. At one point, the tracks show the infant slipped and fell forward, but tried to break its fall by stretching out its hand to the muddy ground. The trackways contain footprints of a larger sub-adult and other juvenile dinosaurs…a unique record in the stone.

So far the riverbeds have exposed about 120 dinosaur footprints, very likely of different species

There are a lot of theories about why suddenly dinosaurs became extinct. The most widely accepted theory is that major climatic changes caused the extinction. University of Zimbabwe, Geology Lecturer Dr. Dennis Shoko believes  volcanic activities may have ejected a huge amount of toxic gases and materials, others think a giant meteorite crashed onto Earth, causing a great dust storm and blocking out sunlight. The plants died, followed by the herbivorous dinosaurs and then the carnivorous dinosaurs. But today all that's left of the dinosaurs are fossils and examining the fossils contained in a rock is one of the fastest and most accurate means palaeontologists have of telling how old that rock is and this information is vital to the mining industry and especially the petroleum industry.

African Hunters (huntersafrica.net) operate three hunting camps in the Chewore South Safari Area and is led by Adrian Read, well-known in African hunting circles. Kachowe Camp is furthest north, Chenje camp is in the middle and Mana Angwa is furthest south.  All the camps offer comfortable tented chalets in scenic locations and hunting for all the big game is conducted within their concession with most guests opting to fly in and out of the Zambezi Valley.

The Tashinga initiative (www.thetashingainiative.org) works with Zimbabwe National Parks and Wildlife Management Authority as despite vast natural resources Zimbabwe’s economic potential is not being realized and poaching remains a grave threat to wildlife. The Trust provides practical support for conservation believing sustainability will be achieved through the positive action of photographic and hunting safari tourism in the areas of Chizarira, Matusadona, Victoria Falls and Mana Polls by: