Most of Zimbabwe's geology is predates life as we usually know it, but there are areas in the Zambezi, Limpopo and Save Valleys where the rocks are young enough to preserve a fossil record.

Take the A11 Harare to Mazowe national road, 45 KM reach Mazowe, then shortly after turn left onto the A12 passing through Amandas, 95 KM leave the A12 and turn left for Mvurwi. In the town turn left and then right for Guruve, 146 KM reach Guruve which has the last of the reliable fuel supplies. After the double tar, the road deteriorates on the narrow tar for a distance of about 10 KM before resuming double tar down the Zambezi Valley escarpment. 186 KM reach Mahuwe business centre; shortly after the road becomes untarred, but remains generally in good condition. 201.4 KM keep left, 224.5 KM reach the Manyame River Bridge, 242.5 KM reach the Fossil forest site.

Below a Geological table at the Museum of Human Sciences in Harare shows the various life forms that emerged expressed as the months of a year. Many of the discoveries noted below were made by Geologists and Palaeontologists from the Geological Survey and the Natural History Museum, beginning with F.O. Mennel and the Geology Galleries have a fascinating collection of rocks, fossils of ancient animals (fauna) and wood (flora) meteorites, minerals, dinosaurs and Stone Age tools; these collections are well worth a visit if you are in Bulawayo

In recent years there have been some good discoveries of dinosaurs that lived in the Mesozoic Era, the “Age of Reptiles” in Zimbabwe.  While most of the country has very ancient rocks that predate life in the Zimbabwean Craton there are some areas of more recent geology more suited to preserving ancient remains [the Karoo Basin] and they occur around the edges of Zimbabwean Craton in the Zambezi, Save and Limpopo valleys and in the west of the country stretching from Nyamandhlovu in the south to Robins Camp (Hwange National Park) in the north.

Stromatolites have been found that are approximately 2,700 – 3,700 million years old near Bulawayo that grew as algal strands on the seabed piling up one on top of another. They gradually developed into colonies of algae lying on the seabed of shallow tidal zones, which then liberated oxygen through photosynthesis and began the process that resulted in the Earth’s atmosphere.

Swamp forests became covered in silt and mud at lake edges and the leaf impressions have become preserved in the mud and silt stones. Fossil plants, including Glossopteris, known as “Wankie flora” have been widely found in Hwange shales. They formed peat bogs in the floodplains of ancient streams and pressure from the weight of sediments deposited on top of them transformed the peat into coal.

comes from the Triassic when the original wood in tree trunks, the organic part, was replaced by minerals, mainly silica and they have changed to stone. Fossilised wood is found in a number of localities in Zimbabwe within the Karoo Basins. 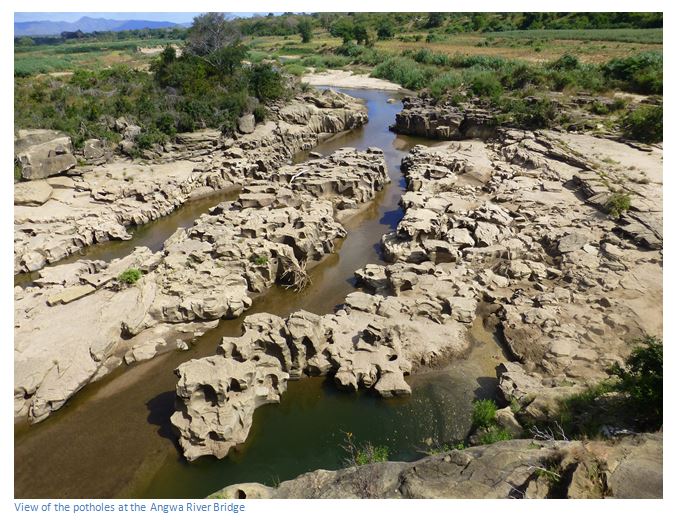 The NMMZ monument site is 22 KM from the Angwa River Bridge. The original trees were probably part of the Gymnosperms species, a group of seed producing plants that includes conifers, cycads, Ginkgo and Gnetales and most probably huge ferns. Vast swamp areas during the Triassic period about 200 million years ago were overlaid in coarse sandstones with mudstones; within a hundred years the organic materials, being the carbon in the wood, would have been replaced by quartz silica, with traces of copper and iron oxides. In this state it is known as petrified wood

Special rare conditions must be met in order for the fallen tree or fern stem to be transformed into fossil wood or petrified wood. In general, the fallen plants get buried in an environment free of oxygen (anaerobic environment), which preserves the original plant structure and general appearance. The other conditions include a regular access to mineral rich water in contact with the tissues, replacing the organic plant structure with inorganic minerals. The end result is petrified wood, a plant, with its original basic structure in place replaced by stone.

Manganese, iron, copper and chrome elements in the water have gradually deposited in the plant cells and stained the stone in their black, red, brown, yellow and green colours. On some of the logs of petrified wood is preserved the original structure of the stem in all its detail, down to the microscopic level with the original tree rings and the various plant structures may still be observed. 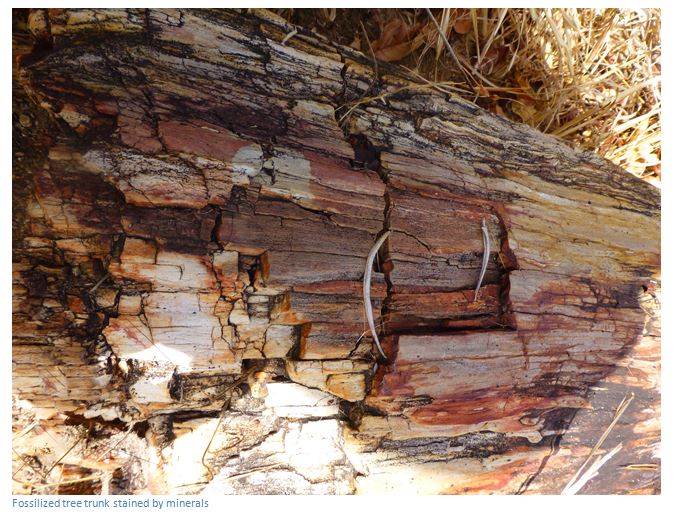 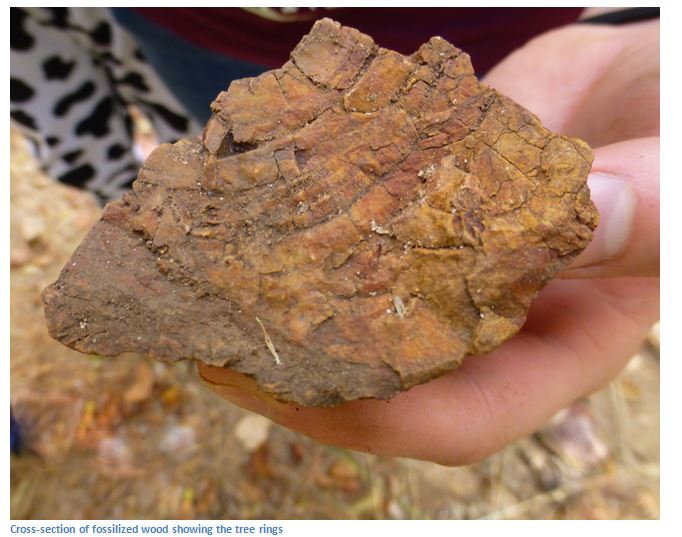 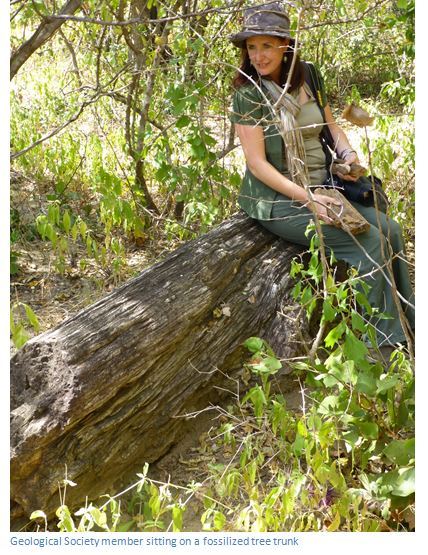 Fossil fish were found by J.C. Molyneux in 1901 in the Sebungwe area of north western Zimbabwe.   Fish scales from the Permian period (about 270 million years ago) have been washed together and now form a very hard sandstone; these extinct fish were named Namaichthys (acrolepis) Molyneux. The only other known fossil fish in Zimbabwe is a large ancient lungfish Ceratodus from the Triassic period (about 225 million years ago)

Criocephalus Gunyankaensis was a large rhinoceros sized reptile with an extremely dense and bony head. On top of the skull a canal opened out which housed a “third eye,” the pineal eye, also from the Permian period.

Tapinocephalias were small reptiles, which were also plant eaters. They had tusks in the upper jaw and a tortoise-like beak, instead of teeth, at the front of their jaw with small grinding teeth behind the tusks. They roamed Zimbabwe in the later part of the Permian period; most specimens are comprised of just the snout and upper and lower jaws.

Coelophysis (formerly Syntarsus) Rhodesiensis was a two-legged dinosaur, small and lightly built up to three metres high; it may have been warm-blooded, possibly with the addition of an insulating layer of feathers and lived in groups, or flocks, in the sand dune deserts that covered most of southern Africa in the late Triassic/ early Jurassic. They were first reported in 1963 in forest sandstones from Southcote Farm, Nyamandhlovu just west of Bulawayo by schoolboys from Northlea High School with their teacher I.K. Stewart; in 1965 Dr Mike Raath examined and catalogued them. They date from the Triassic about 220 million years ago and the tracks are fairly small, showing three toes and claws; Coelophysis Rhodesiensis is believed to have been a carnivorous beast that walked upright. Good 3D images of these creatures can be seen at the Natural History Museum in Bulawayo and the Museum of Sciences in Harare. Around twenty specimens have been found in the Zambezi Valley; they were fast moving predators with well-developed teeth and grasping hands armed with sharp claws.

Found in the same location, Mana Pools and Chitake River [Sentinel Ranch in the Limpopo Basin] were the larger (three to five metres long) Massospondylus harriesi and their close relations, Massospondylus carinatua and, that were plant eaters and widely distributed as they have also been excavated on South America and Southern China.

The specimen bones of Massospondylus harriesi were discovered by Mr T. Mossup in 1953 at Southcote Farm, Nyamandhlovu. An excavation at Chelmer Farm in the same area revealed much of the skeleton and other remains have been found at the Chitake River, in the Mpandi sandstones of Sentinel Ranch near the Limpopo River and in the Angwa River described as site 9 below.

Vulcanodon Karibaensis was a large dinosaur found in 1969 on an island in Lake Kariba and is believed to have been an important connecting fossil between primitive Prosauropod dinosaurs of the Triassic period and later sauropod dinosaurs (Brontosaurus) of the Jurassic period.  Over 180 million years old, it was probably more than 6.5 metres long and weighed several tonnes, walked on four legs and was probably a plant eater and so far has only been found in Zimbabwe.

News24 recently reported that the drop of water levels in Lake Kariba may not be good for power generation, but might allow for the discovery of more fossils. Steve Edwards of Musango Safari Camp has found six dinosaur fossil bed sites on the shores of Kariba dam in recent years. Almost all of his finds are from the Triassic period, dating back 150 to 250 million years. They consist of "bits of limb bones, ribs, jaws, and teeth" and other unidentified fossil bones, he said in an interview with News24. The finds have been analysed by palaeontologists from the Natural History Museum in London. One of them could even be "new to science", though that is yet to be confirmed, Edwards has been told.

"They have advised me to keep looking for a complete skull and/or a hip joint. Hip joints are important in classification of various dinosaur types," Edwards said. He has good reason to hope. In 1969, a large dinosaur named Vulcanodon Karibaensis was discovered near Musango.  It was, Edwards says, 3 metres tall, 10 metres long and weighed at least six tons. He told News24: "I am very excited about the newly-exposed lake shore, with the recent drastic lake level dropping. I am convinced we shall be finding a host of other fossils." 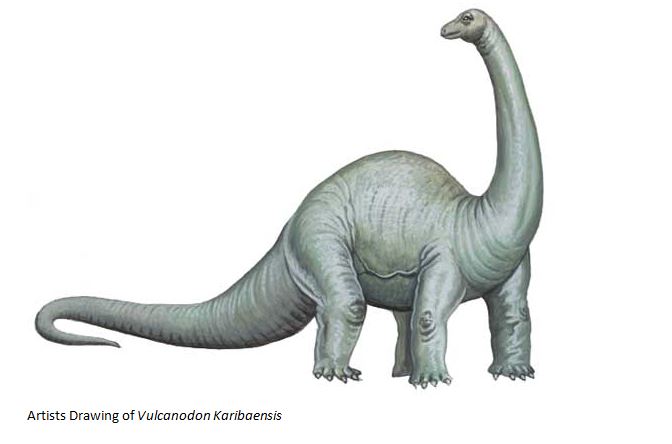 When to visit:
All year around
Fee:
None
Category:
Geological
Province:
Mashonaland West