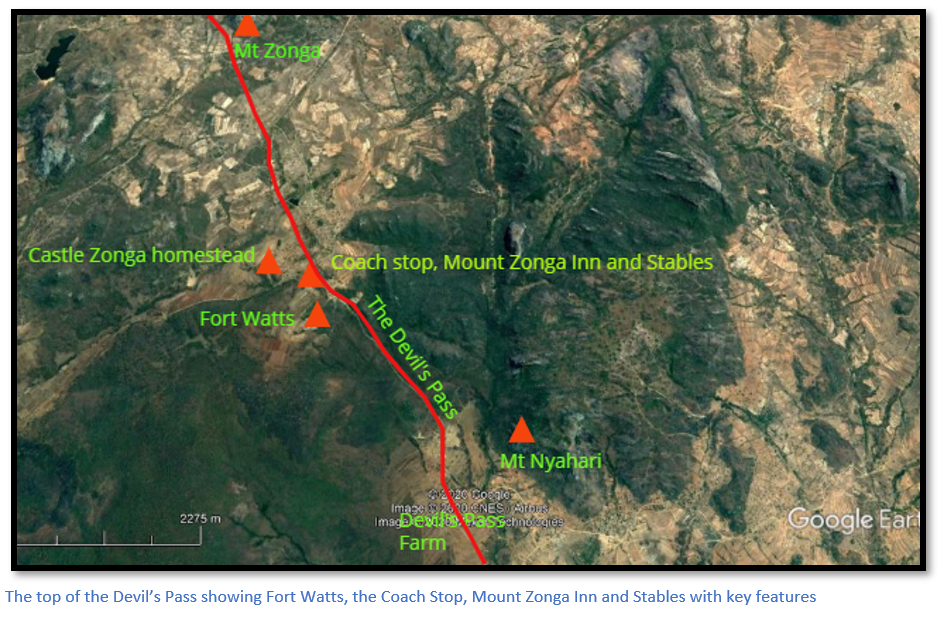 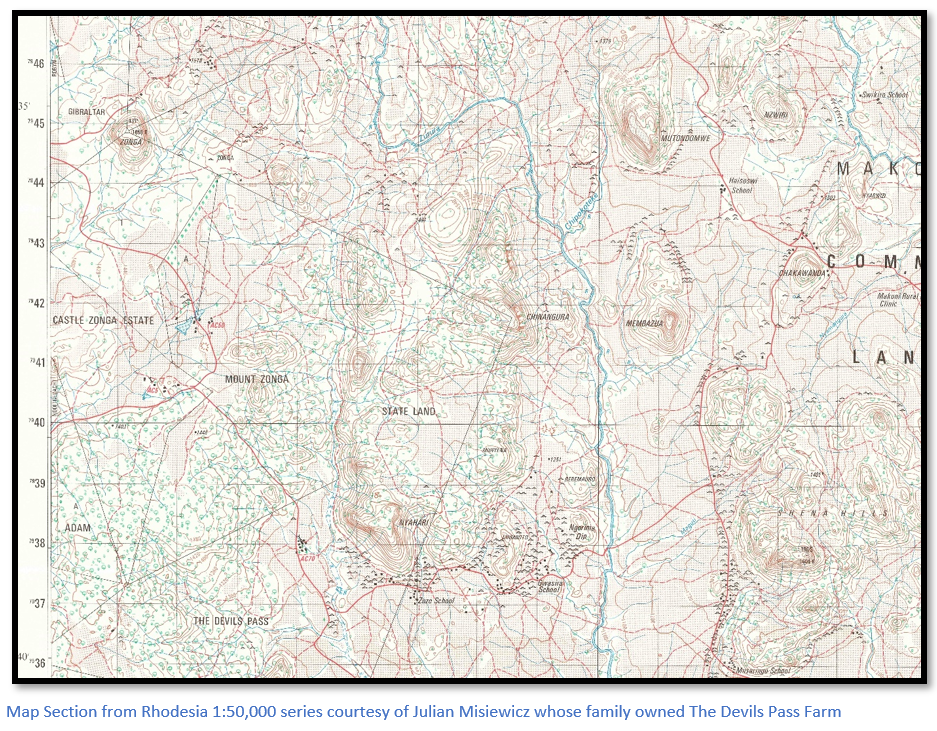 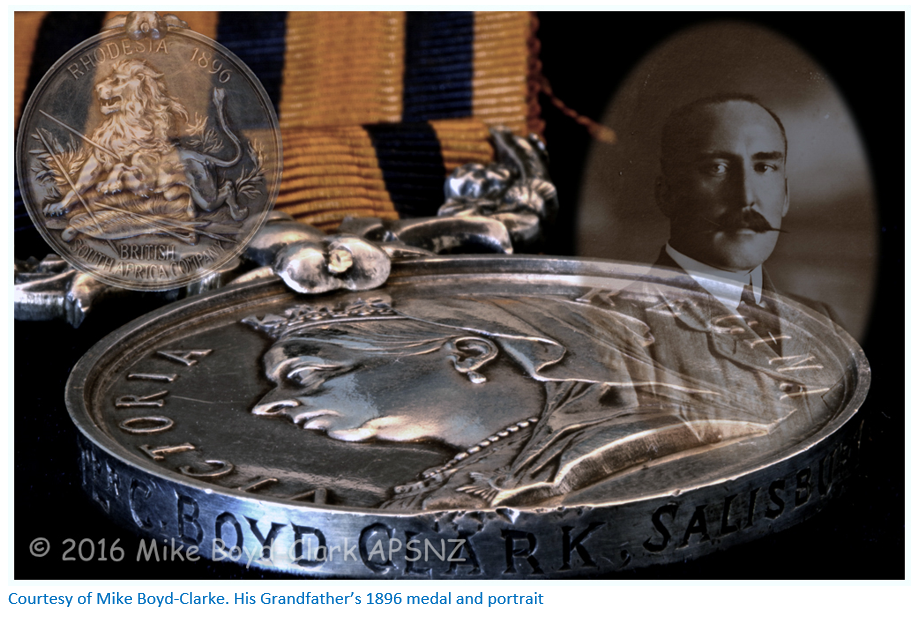 To get to Fort Watts go down the Devil’s Pass road at its western (uphill) end for approximately 350 metres and turn right onto a farm track just above an area which has been used for quarrying gravel for road building. Ignore tracks which turn to the left and keep to the uppermost track which leads to open cultivated fields and then turn left for 200 metres parking under a large Msasa tree. A walk of 200 metres north east across the cultivated lands leads to the cemetery and Fort Watts is 20 metres east of the cemetery. This area was resettled in 2002 and the graves in the cemetery are all recent.
Fort Watts is perched on the very summit of the ridge and commands a good view all the way down the Devil’s Pass. The fort is rectangular in shape with longer walls of 20 metres to the north and south and shorter walls of 16 metres to the east and west. They are low-built granite walls and no attempt has been made to shape the stones. They may originally have been topped by sandbags; but no evidence of this remains and I saw no sign of an entrance. There are natural granite extrusions in the north west corner and the eastern edge and it does not look like any attempt was made to level the interior of the Fort. A prominent flat rock on the north east edge provides a good lookout point with views over the entire length of the Devil’s Pass road. A level area to the south east of the fort would have provided a good space for pitching tents. A faint track approaches from the north east and leads directly to the cemetery; this may be the original track to Fort Watts.
The remains of a bully beef tin were found by the author in the field close to Fort Watt and this may be a remnant of the occupation of Fort Watts by the Mounted Infantry or the later BSA Police garrison.  As a young boy, Mike Boyd-Clarke, whose family owned Castle Zonga Estate found ginger beer bottles, Roses marmalade jars, spent and live cartridges, broken buckets, a rusty spur and a cavalry, or mounted infantry horse bit, shown below.
The account by H.C. Thompson below shows that lions were still in the vicinity in 1897 as a mule was killed at the Inn the night before he arrived. Also Lt-Colonel Alderson’s Mashonaland Mounted Force may have left in October 1897, but there was still a detachment of British South Africa Police who he describes as: “discontented and wretched, badly housed and utterly uncared for.” 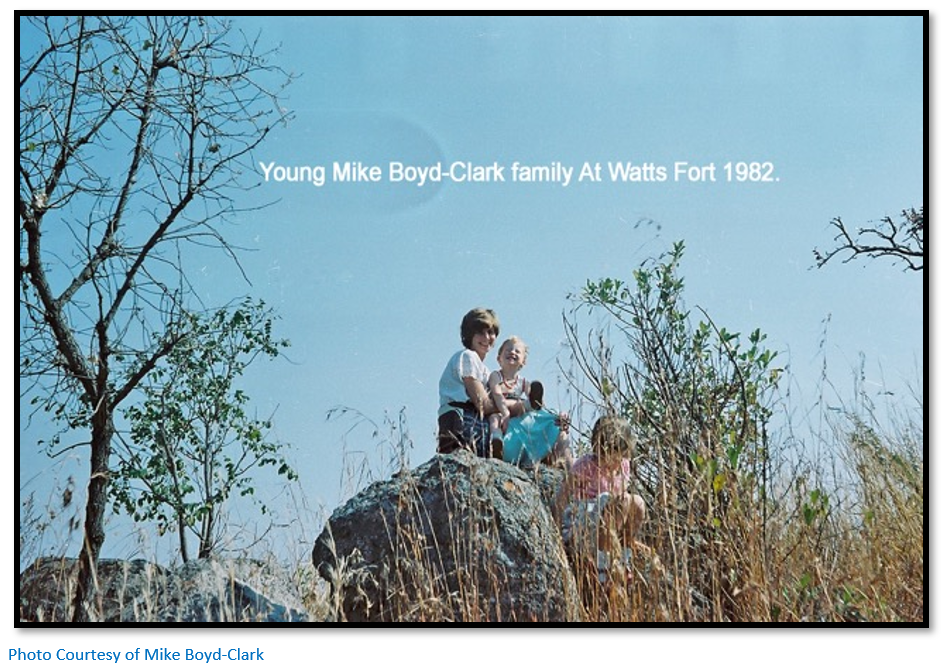 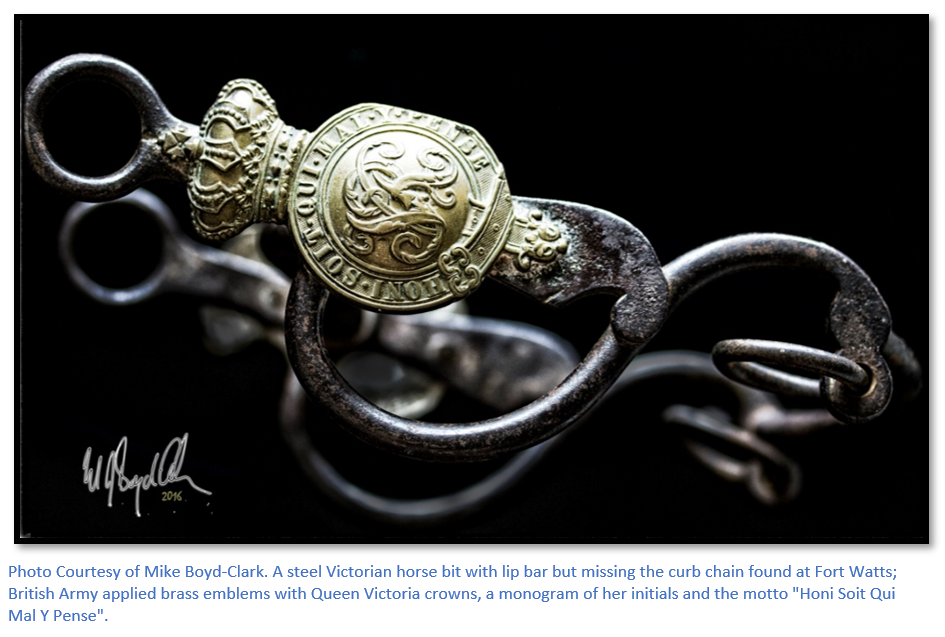 Lt–Col. E.A.H. Alderson in his book With the mounted Infantry and the M.F.F. 1896, states his force consisted of: 230 Mounted Infantry with two Maxims, 39 Royal Engineers, 14 Royal Artillery with two seven-pounders, 48 West Riding Regiment, 17 Honey’s Scouts, 92 volunteers of the Umtali Rifles and 50 wagon conductors, drivers and voorloopers to control the 38 mule and ox waggons.  Major E. Hamilton “Maori” Browne and Native Commissioner Ross advised against taking such a large group through the Devil’s Pass and they used the O’Reilly’s road which branched off the main road after the Odzi River and re-joined near the Nyamatswitswi River 13 KM south west of Chief Makoni’s stronghold. Here on the 2nd August they established Fort Haynes and converted the existing police huts into a hospital. 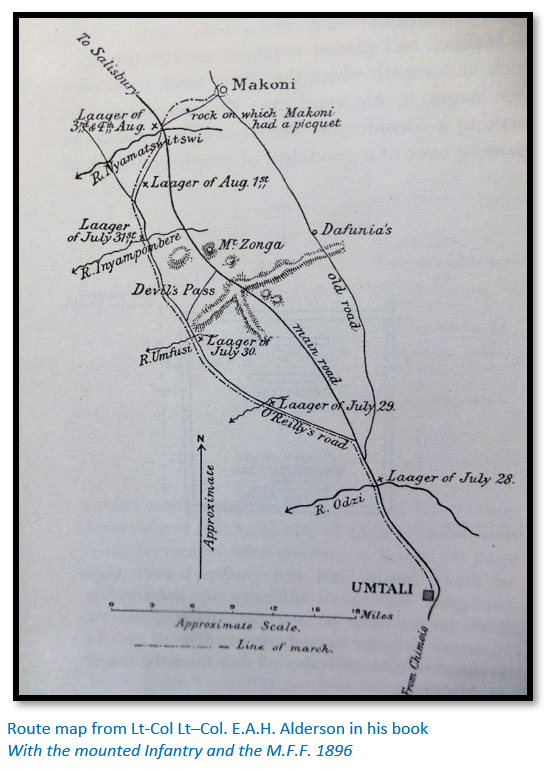 Both the Devil’s Pass road marked as ‘main road’ and the O’Reilly’s road to the west are shown in the above map with Mt Zonga in the upper centre. 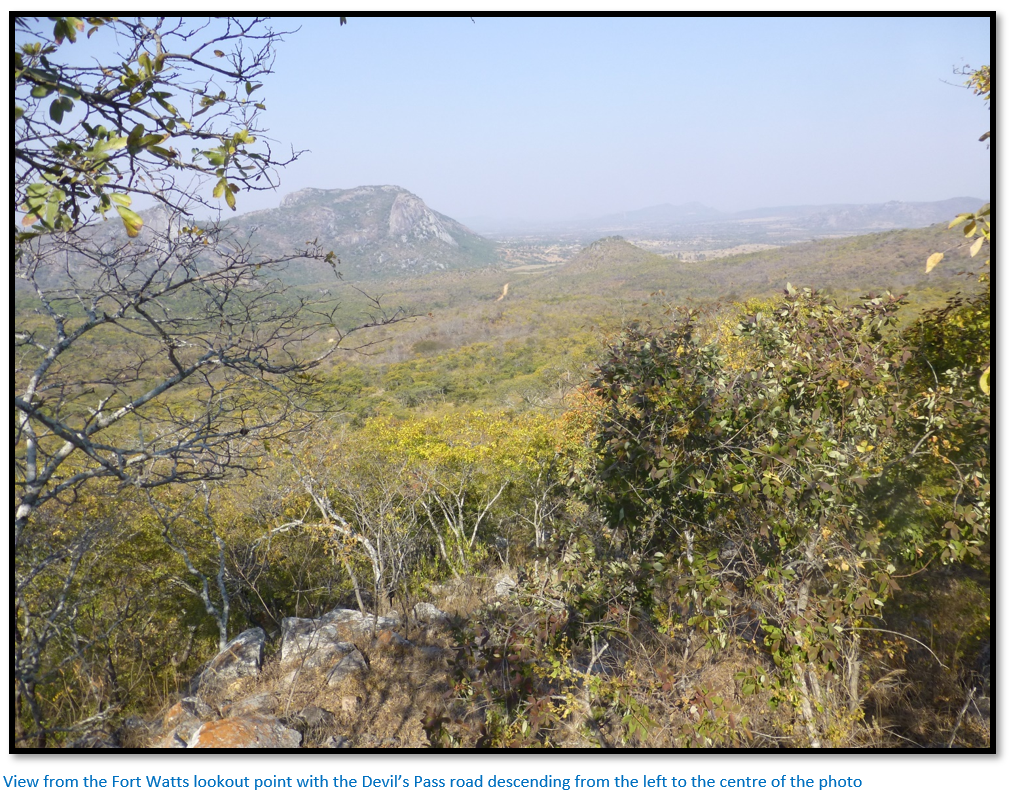 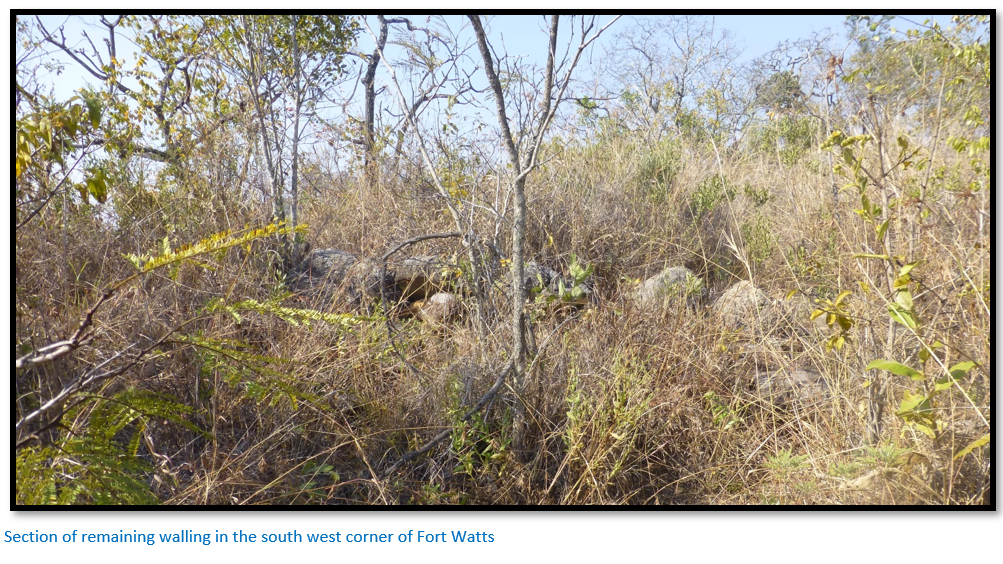 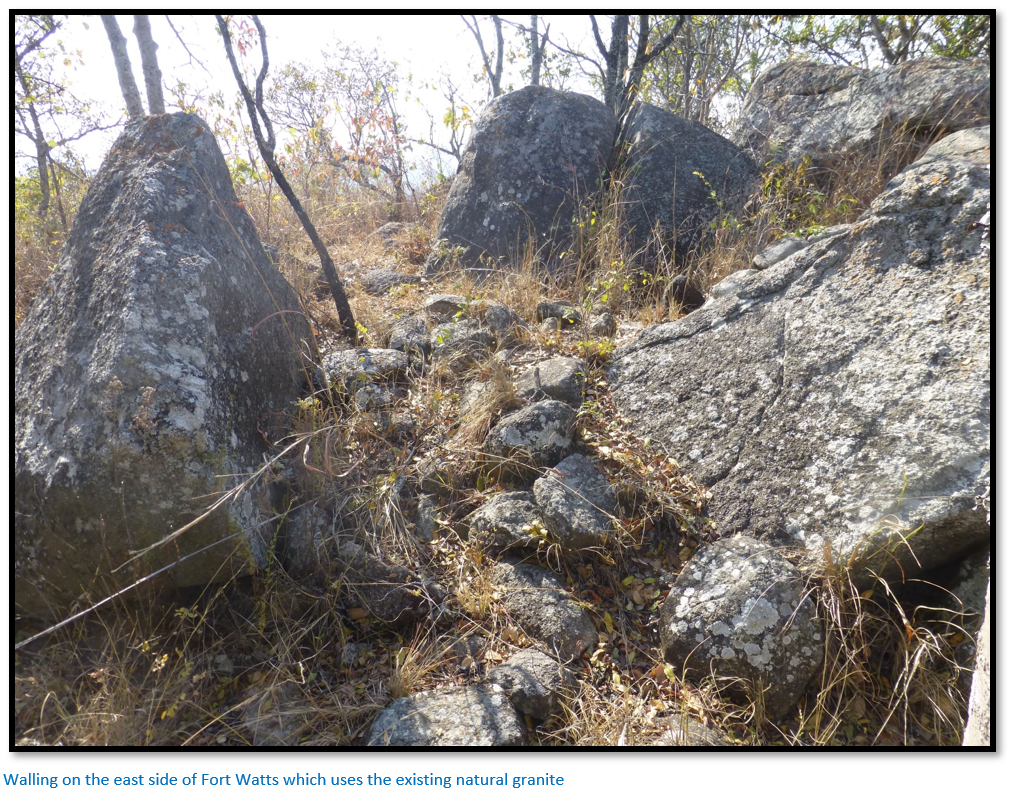 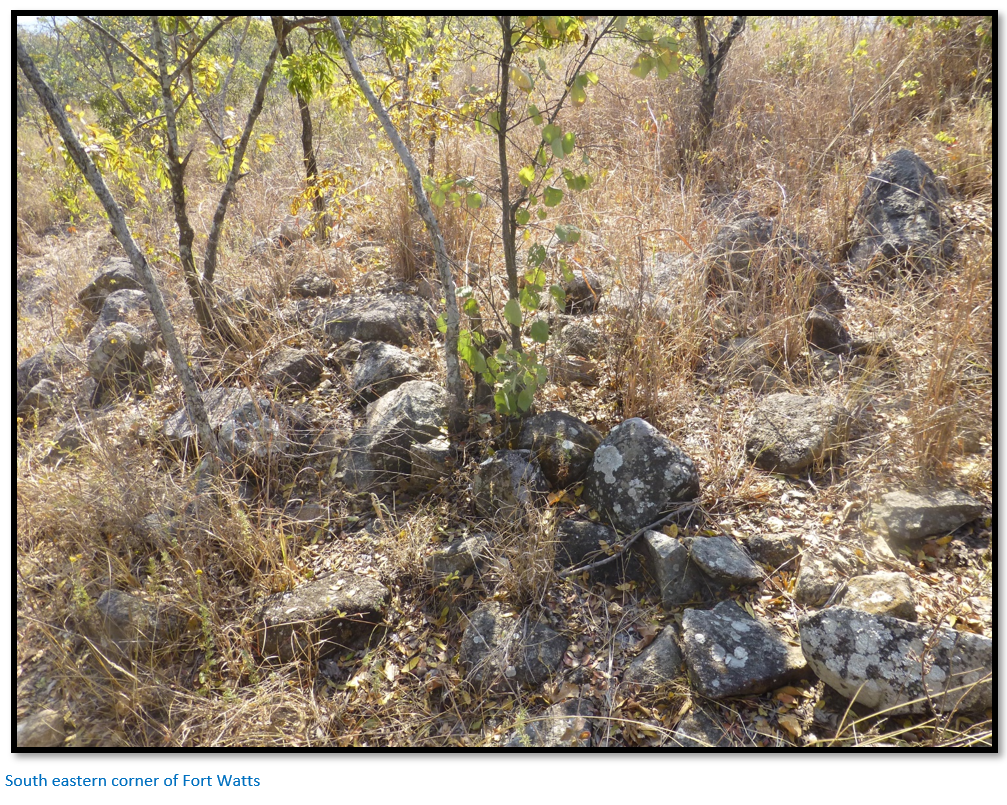 The day following the night attack on Chief Chingaira Makoni’s stronghold [see the article Fort Haynes and the fight at Chief Chingaira Makoni’s Kraal on the website www.zimfieldguide.com] Lieut-Col. Alderson took a company of the Mounted Infantry, Honey’s Scouts and a few engineers with an empty mule waggon back towards Umtali to reconnoitre the Devil’s Pass and to mend the telegraph wire.
“We found that the Pass had been evacuated by the enemy, apparently on the day in which we turned it from the south [see the route taken by the force on the O’Reilly’s road in the sketch map above ] Judging by the number of schances (small stone walls) and scherms (bush shelters) erected there, it had been held by some 500 men.
Below the pass we found the wire cut in two places; the poles, which were all rotten, had been knocked down, and the wire then hacked in two by battle-axes. 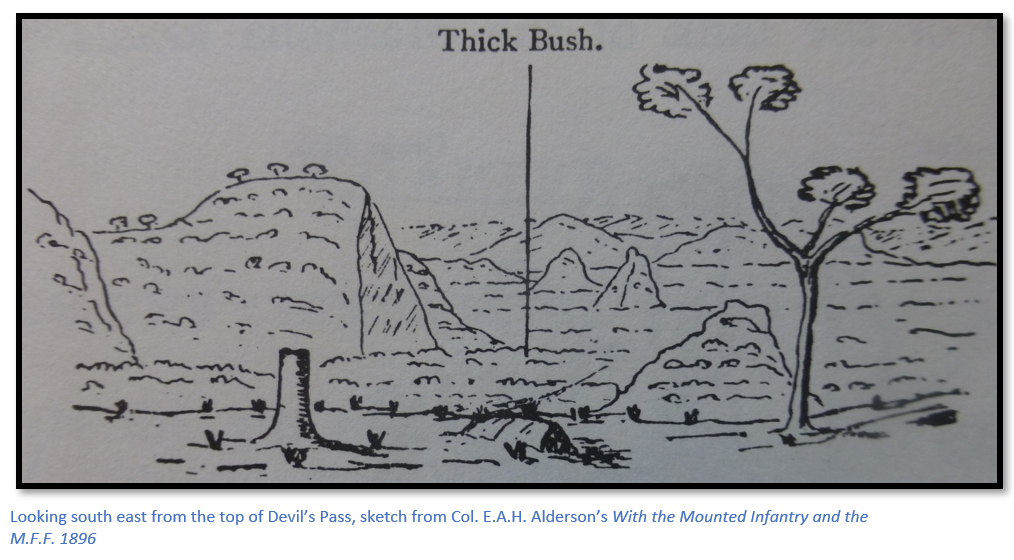 The Engineers then joined the wire and put up the poles; we then tapped it and got communication with Umtali whose inhabitants were delighted to hear of Makoni’s defeat. 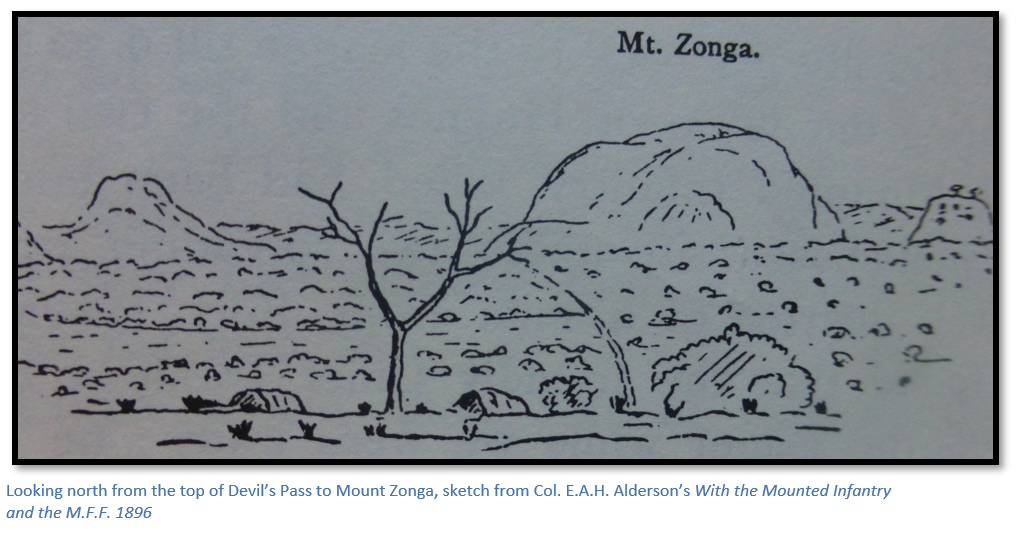 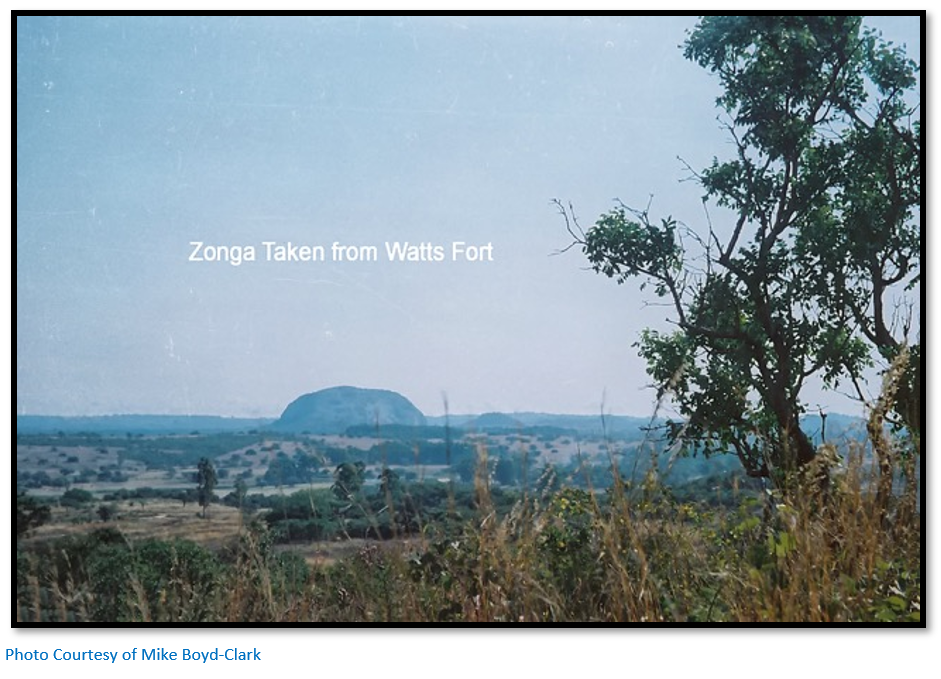 I telegraphed down to Umtali reports of the action, to be sent on, on the first opportunity, to the High Commissioner and to the Chief Staff Officer at Buluwayo. While I received a message from the latter (which had been waiting at Umtali) that it was important to get supplies up to Salisbury as soon as possible.
On the way back we burnt several kraals, including the one shown below. This is very typical of the bulk of the Mashona kraals. 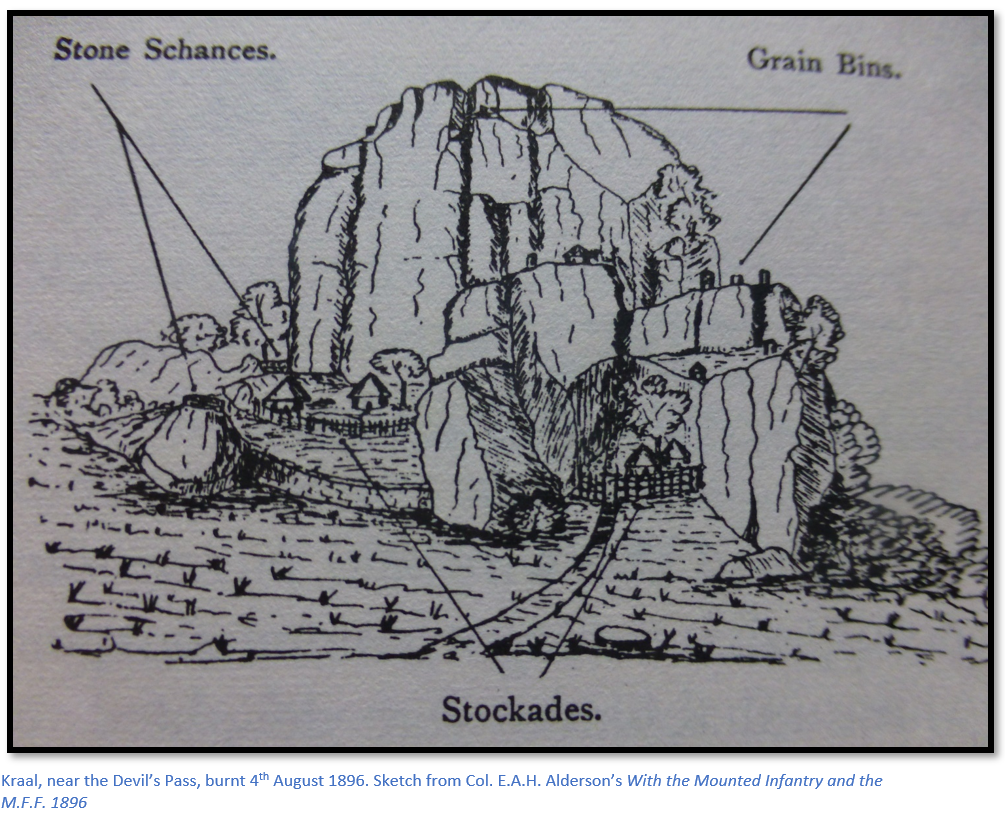 We did not get back to the laager until 9:30. [4th August 1896]
During the day poor Haynes and the two men of the Mounted Infantry, killed, had been buried in a well-chosen site under two spreading trees, about a quarter of a mile from Fort Haynes. We found that the friendly Chief Dafunya had visited the laager while we were away; he informed Godley that Chief Chingaira Makoni had thought that our avoidance of the Devil’s Pass meant that we were afraid to attack him.”
Lt-Col. Alderson was commander of the Mashonaland Mounted Infantry and the local volunteer forces during a five-month campaign that lasted from July 1896 until Col. Alderson handed over his command to Col. De Moleyns of the British South Africa Police on 12th December 1896. The British South Africa Police and the 7th Hussars then carried out joint operations until the 7th Hussars left in early October 1897 by way of Beira.
A chain of fortified posts was established at Devil’s Pass, Headlands and the Ruzawi Inn (south of  Marondera) They were garrisoned by local volunteers and the Mashonaland Field Force under Major C.W. Watts. The main purpose of Fort Watts would have been as a secure base from which to operate horse patrols and to ensure the road remained open and that the telegraph wire between Umtali and Salisbury was not cut again.
Today there is nothing apart from the rough granite stones outlining Fort Watts to remind us that 50 mounted troopers were stationed here from August to December 1896. The Zeederberg Coach Stop, Mount Zonga Inn and Stables
Mike Boyd-Clark writes that his step-grandfather – Sixer Everard kept Blackhead Persian sheep in the former mule pens of the Mount Zonga Inn which were off the track leading from the top of the Devil’s Pass. The Inn is believed to have originally belonged to Rhys Seymour Fairbridge and being an enterprising man, Fairbridge thought the spot would be developed into an important stop on the way between Umtali and Salisbury. This idea would have quietly died when construction of the Umtali-Salisbury railway was completed in 1899 and the new Umtali-Salisbury route was established 12 miles to west where it runs through the present-day location of Inyazura, now Nyazura.
This table of distances between Zeederberg Coach stops between Umtali and Salisbury was kindly provided by Robin Taylor. The above timetable shows that from the railhead at Chimoio the coach left on Thursday at 5am and reached Umtali on Friday at 5pm some 36 hours later. After a two nights rest the coach then left Umtali on Sunday at 5am and reached Salisbury on Monday at 5pm after another journey of 36 hours. Mount Zonga is misspelt on the timetable Yonga)
Mike Boyd-Clark says his grandmother Maud Boyd-Clark (Everard) told the following story: “Early one morning at the Inn a couple of guests were rudely awakened and told to get up as their sheets were required as cloths for the breakfast table." Castle Zonga Estate
The homestead [photo below] of Castle Zonga Estate was built by Charles Boyd-Clark at the head of the Devil’s Pass and the property extends all the way down down the Devil’s Pass itself. Rhys Fairbridge was the original owner of both the Zonga and Devil's Pass properties, receiving the properties from the BSA Company in lieu of fees for his surveying work of the farms throughout the district, including surveying the original town plans for Umtali and Rusape. Rhys Fairbridge sold Castle Zonga Estate in 1905, after the railway was built, to Charles Boyd-Clark. Devil’s Pass Farm
The boundary of the Devil’s Pass Farm begins at the bottom of the Devil’s Pass and continues down the length of the road towards Chipanga stream, a tributary of the Inyamazura river. Rhys Fairbridge is believed to have held on to the Devils Pass Farm for some time before selling at about the time of the First World War to two brothers: Frank Everard and George Haywood Everard. They had served with the British army in India; George died circa 1967 and is buried in the Inyazura cemetery located at the junction of the Pass Road and the A3 Umtali-Rusape national road. The original homestead on the farm is believed to have been built by Rhys Fairbridge. Acknowledgements
Mike Boyd-Clark for supplying information on Fort Watts, the Inn and stables and Mount Zonga Estate and the many photographs acknowledged in the article
Julian Misiewicz for his memories of living on the Devil’s Pass Farm and photographs
R. Taylor for the Zeederberg coach timetable and map
Lieut-Col. E.A.H. Alderson. With the Mounted infantry and the M.F.F. 1896. Books of Rhodesia, Bulawayo 1971
H. C. Thomson, Rhodesia and Its Government. Smith, Elder & Co. 1898
When to visit:
All year around
Fee:
None
Category:
Historic
Province:
Manicaland